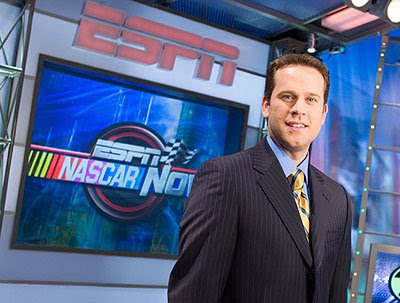 Ryan Burr returned to host the Tuesday night edition of NASCAR Now. This thirty minute program was clearly aimed at building on the recent success of the big Monday one hour "roundtable" show hosted by Allen Bestwick.

Bristol winner Jeff Burton was on the air being interviewed right at the top of the show. Burr wasted no time in reminding Burton of his comments about the suggestions he was washed-up. Burton responded by explaining that he consulted his peers and those he admired in the sport to get their honest opinions about his situation.

Burr continues to work at a faster pace than most NASCAR fans are used to, but on this short program it works well. He reviewed the highlights and near misses during the race with Burton, who seemed to enjoy his time on the program. Burr even got Burton to pick Kansas to win the NCAA Basketball Tournament to close-out the interview.

David Newton has a lower profile as a reporter on NASCAR Now this season. His low key approach and the fact that both he and Burr mispronounced Aric Almirola's name did not put a good spin on the rest of his information. In this TV series, Newton has yet to define his role like Marty Smith or Angelique Chengelis.

NASCAR Now has been giving a lot of publicity to Tony Stewart's Sirius Radio show over the last year. From controversy to comedy, Stewart and his Producer Matt Yocum know how to spread Stewart's commentary across the media. Today, it was an awkward mix of Stewart getting his back waxed and clearing the air with Kevin Harvick after the Bristol wreck. Interesting that NASCAR Now would air this audio only content. Without pictures, isn't is just...radio?

Nice guy Mike Bliss was the next satellite interview. Bliss followed-up on his Bristol weekend, and addressed the issue of the Cup drivers dominating the Nationwide Series. Bliss reminded Burr that this season the Nationwide Series is struggling and without the Cup participants, there would not be much of a race. Burr got a little off-balance closing out the interview, and hopefully will learn that NASCAR fans just want information, and don't need "cute."

After news and notes, Burr closed the show by pronouncing Almirola's name correctly as he promoted him as being a guest later this week. The weekly feature looking back at the Bristol weekend was once again a great job of editing both audio and video. Perhaps, these features could be used in a year-end or mid-season recap show. They are outstanding.

NASCAR Now continues to work hard at raising its profile on Tuesdays, and having the race winner was a nice touch. David Newton does not bring the excitement or the possess the delivery that works well on TV. Burr is going to have to shift his style of interviewing Newton to get this journalist to come across more effectively on the little screen.

If this is the only speed-bump in the Tuesday drive, it is being made very clear this season that ESPN2 is continuing to build momentum with this daily series.

The Daly Planet welcomes comments from readers. Simply click on the COMMENTS button below and follow the simple instructions. Thanks for stopping by.
Posted by Daly Planet Editor at 9:50 PM 24 comments: