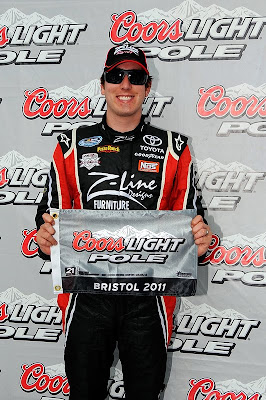 As the Nationwide Series race approaches, the weather in Bristol, TN is "iffy." Not originally on the list of issues, it looks like rain might play a role in tonight's event.

Nicole Briscoe has Rusty Wallace and Brad Daugherty in the Infield Pit Studio tonight. Expect these three and a lot of guests to pass the time if the raindrops fall. Briscoe has done a solid job of directing traffic, but she can't control some of the gems that come from her two analysts.

Marty Reid returns to work the race tonight with Dale Jarrett and Andy Petree. Allen Bestwick is designated for the Sprint Cup Series events. Reid was demoted this season and the spotlight is squarely on his ability to deliver under pressure.

Jarrett and Petree have been solid, but the one reason did not return to the Cup races was the lack of chemistry between these three. It should be fun to watch this dynamic play-out on the air tonight.

Bristol is a mess for TV. There is just no good way to get a quality product on the air with the amount of commercial inventory ESPN carries. There is no RaceBuddy for the Nationwide races, so TV is the only source for video.

With laps around 15 seconds, each 30 second commercial element covers two laps. It's a tough task to integrate commercials on this track with a race that features long green flag runs. Only lots of caution flag periods change the game.

The same ESPN battle that has been discussed on this blog for the last four seasons will again be a topic. Seeing the race involves wideshots, aerial angles and the search for the best racing on the track regardless of position. It does not involve in-car cameras on restarts, key passes or live during accidents. It does not involve following the leaders.

ESPN has changed a lot of things behind the scenes. Let's see if it makes a difference tonight.

This post will serve to host your comments on the ESPN coverage of the Nationwide Series race from the Bristol Motor Speedway. To add your TV-related opinion, just click on the comments button below. Thanks for taking the time to stop by.