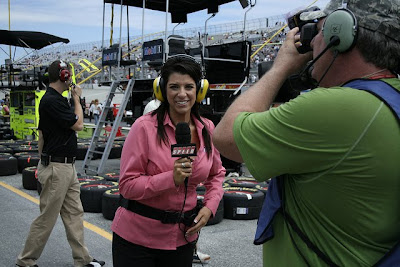 Well, things continue to change in the world of SPEED. That was apparent on Saturday during the all-day coverage from NHMS. Sunday morning brings RaceDay and perhaps even more changes in format, coverage or on-air presentation.

Darrell Waltrip and Rutledge Wood are not involved in the program this week. Update: Interesting to see Wood in a pre-recorded feature after being told he was not in the show. Perhaps, he is not physically there? Hmm....The regular cast of John Roberts, Kyle Petty, Kenny Wallace, Wendy Venturini and Hermie Sadler will handle the on-air duties.

A little birdie tipped us off that the opening might be a little different this week. That's saying a lot, as RaceDay over the years has presented some very interesting concepts for the show open. Some have been great and some not very memorable.

The late season NASCAR hype is in full swing. SPEED's truck series announcers told fans about the great race on Saturday even as two Sprint Cup Series stars stunk up the show. The pit road reporters gushed about the fantastic action even as they avoided asking the real questions in the post-race show. Yep, it's that time of year.

NASCAR Now precedes RaceDay on Sunday at 9AM on ESPN2. Nicole Briscoe is anchoring from the studio with Ricky Craven alongside. Reporters Marty Smith and Angelique Chengelis will be reporting from New Hampshire.

ESPN might have some struggles in production of the races, but NASCAR Now has been a straight-shooting program all season long. Gone are the days of hype and confusion. The Sunday morning NASCAR Now show is tied to a post-race review show in the same way that SPEED's RaceDay is tied to Victory Lane.

While the presentations may be different, it's always interesting to see which stories make which network programs before and after the races. RaceDay has been hit and miss this season on the panel but solid in the reporting. Unlike the ESPN show, RaceDay relies mostly on live interviews and has played to that strength for years.

Every race weekend, fans email me asking why Kenny Wallace has to yell all the time. Specifically, they feel Wallace talks down to the fans and tells them what they should be thinking rather than just presenting his opinion. Wallace has been struggling this season with Kyle Petty in the next chair and it should be interesting to see how Wallace presents himself on this first Chase weekend.

NASCAR has been hammering home a philosophy to the radio and TV gang that you are either with us or against us. Trying to convince the broadcasters to play a role in shaping the image of the sport has been a bitter pill to swallow and may in fact be in the process of backfiring. The world is different now. Twitter, bloggers, Facebook and countless other instant communication options make "faking it" a losing proposition.

SPEED has always been the marshmallow in this mix before the weekday Race Hub show started. This year, Steve Byrnes has been exploring topics the network would never touch in the past. Now with Race Hub on the air, it puts John Roberts in a very different light as the RaceDay and Victory Lane host.

Ultimately, this Sunday's RaceDay comes down to Roberts' ability to handle all the different pressures that are being directed at him and simply focus on directing traffic. If Roberts continues his habit of trying to have the last word on every topic, it could be a long two hours of live TV.

This post will serve to host your comments on NASCAR RaceDay on SPEED. To add your TV-related opinion, just click on the comments button below. This is a family-friendly website. Please keep that in mind when posting. Thanks for taking the time to stop by The Daly Planet.
Posted by Daly Planet Editor at 11:00 PM 21 comments: 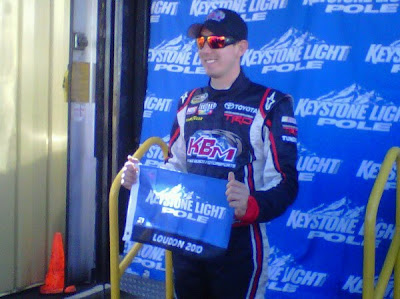 There is a nice little doubleheader on SPEED Saturday afternoon. The Whelen Modifieds and the Camping World Trucks are racing back-to-back at the New Hampshire Motor Speedway.

NASCAR on FOX's Mike Joy is returning to call the Modified race with Dick Berggren. Bob Dillner will handle the pit road reporting duties. These races have turned out to be a great product for TV.

SPEED will be time-shifting the Modified race to make sure that it will be over in time for the Camping World Truck Series feature event. The actual race will start at 12:45PM, but the SPEED program will not begin until 1PM.

The CWTS is an interesting mix of unsponsored drivers trying to get noticed, truck series regulars trying to make a living and Sprint Cup Series drivers simply racing to win. Hopefully, the number of start and park trucks will be low this week.

Krista Voda will host The Setup pre-race show with Ray Dunlap and Adam Alexander reporting. Rick Allen will call the race with Phil Parsons and Michael Waltrip. Kyle Busch driving a KBM truck is on the pole with a very fast lap.

Loudon works very well for SPEED. The network's veteran truck series TV team enjoys keeping the focus on the racing without gizmos and gadgets. The small number of announcers makes the telecast easy to watch. Hopefully, the trucks will cooperate with some good battles on this difficult flat track.

This post will serve to host your comments on the SPEED coverage of the Whelen Mods and the Camping World Truck Series from New Hampshire. To add your TV-related comments, just click on the comments button below. This is a family-friendly website, please keep that in mind when posting. Thanks for stopping by.
Posted by Daly Planet Editor at 10:49 AM 71 comments: