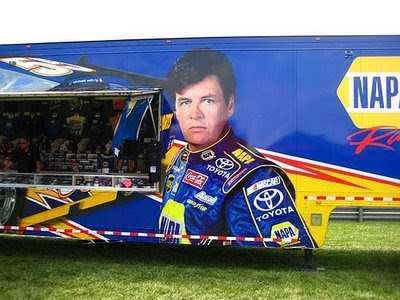 There are few things more awkward to carry live on TV than a NASCAR team press conference. Few can forget the brave face Kyle Petty put on as he announced live on SPEED that the family business had been bought by an investment firm from Boston.

Even the Dale Earnhardt Jr. to Hendrick Motorsports media event was put together with the print, Internet and radio reporters in mind. TV was supposed to record the comments and questions, then move over to record the unveiling of the new car. Needless to say, things did not work out that way for SPEED. The new car was never shown and the live coverage was awkward at best.

Michael Waltrip Racing is making an announcement this Tuesday at 12:30PM ET. Multiple reports in the NASCAR media indicate that Martin Truex Jr. will be announced as the new driver of the NAPA Toyota for 2010. Michael Waltrip is rumored to be taking a part-time driver role next year in select high-profile races.

The question is, does this merit live national TV coverage? SPEED certainly believes it does and will carry this announcement live. The sport basically has only the NASCAR Now program on ESPN2 to handle NASCAR news during the week. As veteran fans know, that TV series originates from Connecticut and does not even have a Mooresville or Concord, NC news bureau.

It seems ironic that SPEED would spend the time and effort to carry this NASCAR announcement live on the same week that the network unveiled "Big Block Thursdays." Click here for the Multichannel News article on this primetime line-up.

SPEED is re-airing an A&E Network series called Jacked about a police squad that chases stolen cars while driving trucks with big bumpers. PINKS All Out is also in the mix. Casual fans may like the spectacle, but drag racers know exactly what numbers their car will run. Rounding out the block is Wrecked. Towing cars in Chicago with the threat of death just around the corner. Well, that is what SPEED needs viewers to believe.

Once again, no type of sanctioned racing is contained in another SPEED programming announcement. None of these programs have any NASCAR content. Series like NASCAR Confidential are nowhere to be found. But for some reason, the MWR press conference is live.

Bob Dillner will be hosting the SPEED coverage from MWR with a start time of 12:30PM scheduled. SPEEDtv.com will also be providing live streaming for fans who cannot get to a TV set but have broadband access. So, MWR is getting a live TV and Internet simulcast from SPEED on Tuesday. Click here for the direct streaming link.

What is your opinion of this coverage? Even the SPEEDtv.com page tells exactly what will be announced. Do you think a driver being hired by a team in July who will not race until February should get live national TV coverage? Could you see ESPNEWS providing this?

On the other hand, maybe this is good for the sport and SPEED needs to do more of it. Exposure for sponsors is key, Truex seems to be a good guy and this is a big move for MWR. What is your opinion?

This post will also host your comments during and after the live SPEED TV coverage.

To add your comment, just click on the comments button below. This is a family-friendly website, please keep that in mind. Thanks for taking the time to stop by.
Posted by Daly Planet Editor at 5:00 PM 70 comments: