NASCAR Out Of "The Job" (Updated) 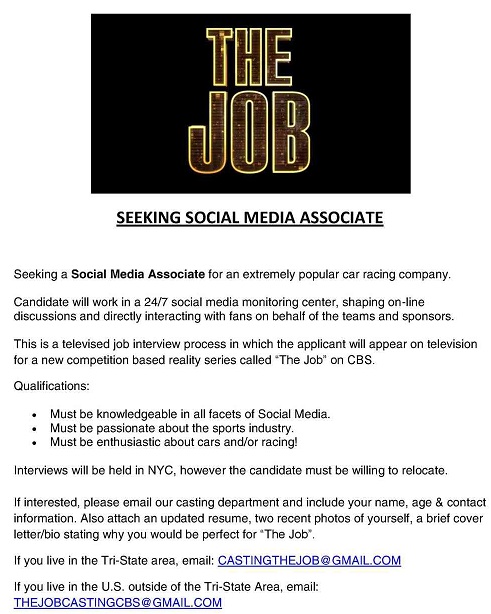 Updated Saturday 10/20: As with so many reality shows, there is a big difference between what is planned and what come to fruition. NASCAR has informed us they have decided not to participate in The Job reality series this season. No reason given, but it is a done deal.

It's that time of year and a new slew of "scripted reality" TV shows are cranking up once again to entertain America. This time it's not Undercover Boss but a new series in which NASCAR is participating. It is time to find out who gets The Job.

Here is the scoop from CBS:

The series, produced by Emmy Award winners Michael Davies (“Who Wants to be a Millionaire”) and Mark Burnett (“Survivor,” “The Voice”), gives candidates selected from around the country a chance to win dynamic positions with potential for enormous growth at some of America’s most iconic companies.

Guided by Emmy Award nominee Lisa Ling (“The View”), the country’s best and brightest compete in a compelling and challenging competition for a dream job at their dream company in industries such as fashion, game design, sports, travel and entertainment.

The Job has a Twitter account, a Facebook page and an opportunity to once again expose NASCAR on TV in primetime. These scripted reality shows are called that because they "set-up" situations and many times use scripted elements to create tension. Nothing is spontaneous. Most importantly, these types of shows create cheap programming for the producers. No union fees with this group.

Here is how entertainment reporter Joe Adalian from Vulture.com described the show:

The idea behind the show: Five qualified folks, chosen from an applicant pool of thousands, compete for a chance to win a gig at a well-known company. Each week will feature a different batch of contestants and, we assume, a new company (shades of Undercover Boss, sans the undercover part).

Casting calls have already taken place in both Los Angeles and New York. It has yet to be revealed what the five candidates will have to do to get The Job, but these shows almost universally have the same result. A "personality" who desires an opportunity for a bigger stage and a media presence wins and then fades quickly when facing the reality of the actual job.

The irony is there are lots of folks working hard in the social media and marketing field right now who would legitimately benefit from the opportunity to work in a professional atmosphere. Click here for the TDP post from July titled "When Media and Marketing Collide."

The winner of this reality show will be working for NASCAR in Charlotte. Here are some of the details on where, what and why from a NASCAR media release:

“The Fan and Media Engagement Center will leverage industry-leading technology in order to better engage with the massive community that is the NASCAR fan base,” said Steve Phelps, NASCAR senior vice president and chief marketing officer. “This is a clear example of our commitment to using cutting-edge technology to better inform our sport. Ultimately, this tool will help our industry connect with media and fans more effectively and efficiently.”

Measurement also will be a key function of the Fan and Media Engagement Center. Those capabilities will expand across qualitative and quantitative measurements and include tonality, volume, proximity and other coverage attributes in regular reports the FMEC will generate.

The center will be staffed and managed by the NASCAR Integrated Marketing Communications team. Located on the same floor as NASCAR.com in offices at NASCAR Plaza in Charlotte, N.C., the FMEC is slated for testing in October, with a full rollout expected by the start of the 2013 NASCAR season. The center will be housed in a 500-square-foot, glass-enclosed area, outfitted with state-of-the-art touch screens, television monitors and multiple seated viewing areas and work stations.

So, keep your eyes peeled for a new show this winter that will probably have a lot of NASCAR hype surrounding it. Now you know exactly what it is, where it came from and what it is about.

We invite your opinion on this topic. Comments may be moderate prior to posting.
Posted by Daly Planet Editor at 7:00 AM 28 comments: