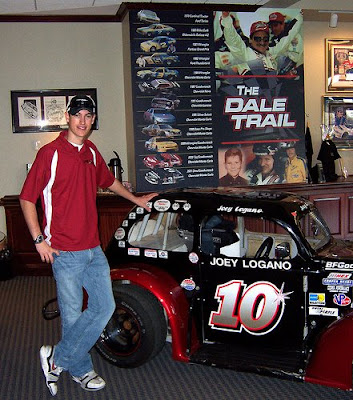 Danica Patrick did it, so did Kurt Busch and Jimmie Johnson. Now, it is time for Joey Logano to have his own day-long "coming out" party at ESPN.

Wednesday is going to unofficially be "Joey Logano Day" on the Bristol, CT campus as the young driver makes his way across the ESPN media outlets. As you may know, ESPN has a group of different companies they refer to as "media platforms" all clustered in the same place. When you are going to hit them all in one day, you are in the "ESPN blender." Around-and-around it goes and you are the main ingredient.

Logano will start his day over on ESPN2 with Dana Jacobson and company. He will be on First Take at 11:30AM Eastern Time for an interview. First Take has been the one ESPN program series this season that has struggled to grasp the concept that NASCAR is a professional sport here in North America.

Hopefully, the on-air staff will take the time to prep for Logano and ask the right questions. This program appearance is a good opportunity to expose a new and young NASCAR personality to a stick-and-ball audience.

Working his way over to the Internet world, Logano is going to be hosting a live chat session at 1:30PM on ESPN.com. Despite the fact that ESPN controls these "chats" and filters the questions, this will be the only opportunity for NASCAR fans to ask their own questions of "Mr. Sliced Bread." Normally, the chat sessions are also archived and available for ESPN.com members to review.

This year, one of the biggest turn-a-rounds in NASCAR TV has been the attention ESPNEWS has paid to the sport. This network clearly got the message that their distaste for the sport in 2007 needed to change, and change it did. They have consistently featured the NASCAR on ESPN announcers and reporters this year to both preview and review the racing.

One of the best features this season has been ESPNEWS commitment to cover the post-race press conferences from the Infield Media Centers after the Sprint Cup races. NASCAR fans have made this network a destination for live post-race viewing with very good results. No matter what else is going-on in the sports world, once the race is over ESPNEWS changes gears to NASCAR and stays until the story is told.

Logano is going to appear over on ESPNEWS at 3PM. At that time, ESPNEWS changes over from the thirty minute wheel of sports news to a long-form program called The Hot List. Both anchors David Lloyd and Michael Kim have been effective at talking racing with the various NASCAR on ESPN personalities. Kim has been more of the "update anchor" and he has worked on-going NASCAR news stories very well this season. Not sure if he is a fan, but it certainly sounds like it.

Since The French Open tennis tournament is on ESPN2 this week, NASCAR Now will be shifted to 6:30PM. Logano's next stop will be as a guest on this program, which features Nicole Manske and Ryan Burr as the hosts. Both have been good at interviews this season, and hopefully NASCAR Now will have a Dale Jarrett or Andy Petree type along to interact with the anchors. Hearing Logano's comments and then having someone put things in the broader perspective would work very well.

Logano's long day ends on ESPNRadio after NASCAR Now. His tour of ESPN and his time in the "blender" will be done. It will be interesting to hear about his reaction to his first time on the ESPN campus and seeing all of the activity that is always in-progress when the 24 hour sports machine is being fed.

Regardless of whether the media pressure on this young man is coming from Gibbs Racing, NASCAR, or Logano's own PR advisers, they certainly seem to be putting him on the spot for a good performance in Dover. It should be interesting to watch him navigate his way through ESPN on Wednesday.

The Daly Planet welcomes comments from readers. Simply click on the COMMENTS button below and follow the easy instructions. The rules for posting are on the right side of the main page. Thank you for taking the time to stop by.
Posted by Daly Planet Editor at 6:39 PM 24 comments: