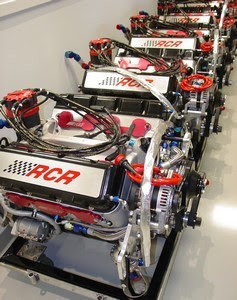 The wonderful TV series called "Survival of the Fastest" is produced by NASCAR Images for SPEED. Each racing weekend, this show airs with an episode documenting the experiences of one team during the previous weekend's race. Unfortunately, for the RCR bunch, NASCAR Images came calling on the weekend of Talladega.

Richard Childress is a self-effacing and down-to-earth guy who has been a pillar of the sport for a long time. His relationship with Dale Earnhardt Sr. was fantastic, and resulted in some of the best classic NASCAR TV moments of all time.

The sheer beauty of "Survival of the Fastest" is that it uses the words of the NASCAR personalities to tell the story. With limited narration, the series simply allows fans a "slice of life" view of the real experiences of NASCAR teams at the track.

The reality of watching the hard work of the RCR engine shop slowly go up in smoke was tempered by listening to the conversations of the drivers as they related the incredible RPM numbers the cars were turning, and their frustration with the single file racing.

Jeff Burton, Kevin Harvick and Childress himself were also shown behind-the-scenes in family and recreational activities. This kind of thing is sorely missing from the other NASCAR TV shows. This tiny slice also showed a problem with this series. It needs to be one hour in length. Sometimes, the stories that really should be "paid off" by this series cannot be completed simply due to the length of the program.

SPEED airs this program during the weekend, but strangely does not repeat it after the Inside NEXTEL Cup show on Mondays. Viewers who only tuned-in for the races on the weekend might find a new favorite with "Survival of the Fastest."

One of the hallmarks of these types of NASCAR Images series is the building excitement toward the end of the race. In this episode, the thrill of Jeff Gordon's victory was balanced with the frustration of Chad Knaus over Johnson getting left behind. Once again, these were pictures that TV viewers had not seen during the ABC live coverage.

This program series on SPEED has been solid all season, and hopefully will suggest to the network that making a commitment to more NASCAR Images programs for 2008 would be a good idea. With the recent beginning of the "Chasing Glory" TV series from NASCAR Images on ESPN2 Wednesday afternoons, it appears that ESPN may now also be primed to increase its inventory of NASCAR "reality" series for next season.

Fans of SPEED remember the time when Monday nights featured a solid multi-hour block of NASCAR programming anchored by Inside NEXTEL Cup. Surrounding this show were wonderful NASCAR "reality" programs that gave the viewer an inside glimpse of the sport. Maybe next season NASCAR Images can extend their program production skills into the Busch and Truck Series to allow more than just one slice of the sport to be presented in this manner. It certainly would be welcomed.

The Daly Planet welcomes comments from readers. Simply click on the COMMENTS button below, or email editor@thedalyplanet.tv if you wish not to be published. Thanks again for taking the time to stop-by and leave your opinion.
Posted by Daly Planet Editor at 2:23 PM 30 comments: