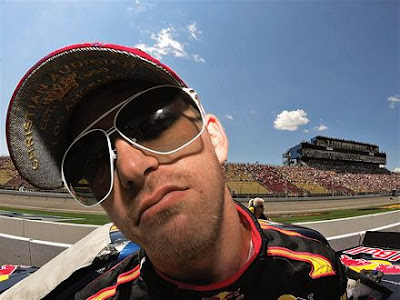 Thank you for taking time out of your day to stop by The Daly Planet.
Posted by Daly Planet Editor at 10:30 PM 19 comments: 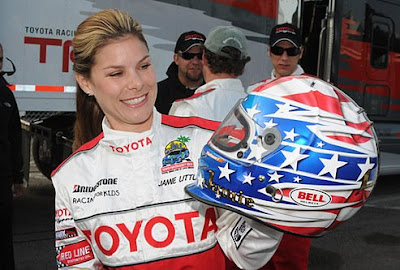 The TV express is leaving the gate at 11AM sharp Eastern Time and not taking a break until 1AM the next morning. NASCAR fans have 14 hours of TV programming coming their way on Friday from Phoenix.

The SPEED team takes to the air first and stays live right up until the 9PM Nationwide Series race on ESPN2. Steve Byrnes and Mike Joy will take turns directing traffic all day long as the network covers practice and qualifying sessions for both the Sprint Cup and Nationwide Series.

Joining Byrnes and Joy are the usual suspects, including Hermie Sadler who again will be handling the Nationwide Series on-track activity from the announce booth. Sadler will call the practice session with Byrnes and then have the opportunity to work alone with Joy on qualifying. Sadler has come a long way and with lots of hard work has turned himself into a very credible analyst.

By the time the Nationwide Series takes to the air at 9PM, ESPN's Jamie Little will be out on the West Coast. NASCAR fans may remember that last year Little held off Mike Skinner in a fender-bending final dash to the flag to capture the pro-celebrity race during the Long Beach Grand Prix weekend. This year she is back to defend her title. This time, however, she starts in the back of the field with the pro's.

Brad Daugherty, Rusty Wallace and pit reporter Dave Burns also have the weekend off. It seems that some folks are enjoying spring break after all. Mike Massaro steps-in for Burns, while Dale Jarrett will do double duty on the pre-race show with Allen Bestwick and then up in the booth alongside Dr. Jerry Punch and Andy Petree.

When all the racing on ESPN2 is done, fans get a nightcap with Trackside on SPEED at midnight ET. David Stremme and Martin Truex Jr. are the guests.

This post will serve to host your TV-related comments about the marathon of NASCAR TV on Friday from Phoenix. To add your opinion, just click on the comments button below. This is a family-friendly website, please keep that in mind while posting.

Thank you for taking the time to stop by The Daly Planet.
Posted by Daly Planet Editor at 10:00 PM 175 comments:

TV Would Thrive With Re-Vamped Banquet In Las Vegas 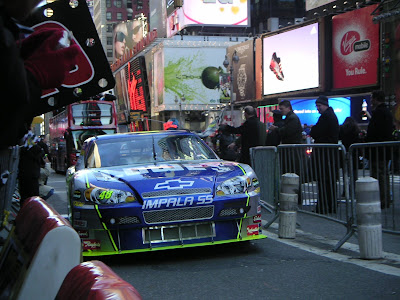 When the Las Vegas Review Journal broke the story, many of us were left looking for a second form of confirmation. LVRJ Reporter Jeff Wolf was clear in saying that the Las Vegas Convention and Visitors Authority has reached an agreement in principle.

Now, it is expected that NASCAR will shortly announce what we have been advocating for the past several years. The post-season Sprint Cup Banquet is leaving New York City and moving to Las Vegas. That is a shocker. Click on the picture of Jimmie Johnson's car in NYC for a reminder of the past.

While NASCAR executives are still playing coy, LVCVA President Rossi Ralenkotter has said publicly that after many years in Manhattan, the function is coming to Las Vegas. "Some deal points still need to be finalized," Ralenkotter said.

Even if those issues like the number of years and the advertising for Vegas itself at the function are still being hammered out, the deal itself is a good one. The LVCVA would pay NASCAR between $500,000 and $1 million for each year of the contract. NASCAR has the option of selecting the venue for the banquet, likely to be Dec. 4. Click here to read the entire story from the Review Journal.

TV has long been an issue where this function is concerned. After some early informality, the last years of the banquet being televised have been horrible. Despite some moments of humor, the vast majority of the TV coverage has consisted of uncomfortable drivers in unfamiliar circumstances carefully reading a teleprompter that contains a speech they did not write.

Now, the opportunity for a change of venue also signals a moment in time where wholesale changes to the format and purpose of this multi-day affair can be reviewed. This comes at perhaps one of the most critical junctures in the history of the sport.

Taking a very big step back and evaluating the issues associated with the post-season function should result in several topics being discussed. Altering the formality, evaluating the entertainment choices and using modern Internet and television technology to involve the fans all have to be at the top of the list.

Las Vegas opens up an entirely new set of possibilities that need to be coordinated by some new and fresh faces both inside and outside NASCAR itself. While Bruton Smith might try to wrangle some additional exposure for his Las Vegas track, the reality is that New York City had run its course and this is the right time for a change.

If NASCAR wrangles a three year deal with the Las Vegas authorities, it may well be because Charlotte, NC is still on the radar for the sanctioning body where all three post-season banquets are concerned. The multi-million dollar NASCAR Hall of Fame complex is deeply tied to the Charlotte Convention Center and designating that location as the final stop for all three national series may be the ultimate goal.

That gives Las Vegas three years to get things pointed in the right direction and make a case for keeping the function there permanently. Judging from the last several banquets the professional entertainers, event planners and television professionals from the Vegas strip should have very little problem making a significant improvement. First rule...no teleprompters.

Thank you for taking the time to read The Daly Planet.
Posted by Daly Planet Editor at 7:00 PM 19 comments: