Huge Day Of NASCAR On SPEED

NASCAR fans can have a blast on Friday with SPEED starting at 12:30PM Eastern Time.

SPEED kicks it off with Nationwide Series practice at 12:30PM, then moves directly into Sprint Cup practice at 3PM. All of this action is from the California Speedway in Fontana.

At 4:30PM, it is time for Craftsman Truck Series qualifying. The race itself is at 3PM Eastern Time Saturday on Fox.

The Go or Go Home show is at 6PM, and will contain a preview of the new NASCAR qualifying for the cars outside of the top 35 in owner points. This is the first race where this new system will be used.

Sprint Cup qualifying is next at 6:30PM and will be followed directly by Nationwide Series practice once again. Don't forget that the Saturday Nationwide race is at 7Pm Eastern on ESPN2.

Trackside will come along for the full hour at 10PM, and close-out the day. That is a lot of NASCAR TV.

This page will serve to host your comments about all the Friday programs on SPEED.

To add your comment, just click on the COMMENTS button below and follow the easy instructions. Thanks again for stopping by The Daly Planet.
Posted by Daly Planet Editor at 10:00 PM 49 comments:

Was That "Larry The Cable Guy" On NASCAR Now? 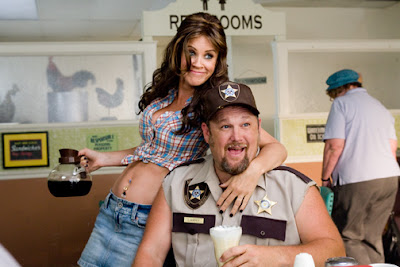 That loud noise you may have heard shortly after 6PM Eastern Time on Thursday was hard to miss. It's a little bit loud when the earth stops turning for just a moment.

In the ESPN studios over the years viewers have seen everyone from Rush Limbaugh to Barry Melrose and his world famous mullet. Big names like Dick Vitale, Peter Gammons and Steve Young are no big deal to see walking the ESPN hallways.

Back in my day, LSU coach Dale Brown brought his basketball team to see the place after they played a NCAA tournament game. One of his players was a hilarious big guy named Shaquille. All of these names have one thing in common, they were in the building because of sports.

Thursday's NASCAR Now on ESPN was going to be different. Viewers knew that right away because there was someone other than Ryan Burr was in the Connecticut studio. For some reason that has yet to cross my mind, "Larry the cable guy" stopped by the program to promote his movie and talk a little NASCAR.

After a fun little on-camera tease, the planet Earth screeched to a halt as "Larry" leaned into the ESPN cameras and told the faithful to simply "Git-R-Done." This was a moment in NASCAR Now history that will certainly be remembered. Why? I am not so sure.

I imagined one group of people immediately calling everyone in the house to the TV because "Larry the cable guy" was on NASCAR Now. They probably got out the cell phone and called some friends to let them in on it.

A quite different group was sitting there with a dumbfounded look on their faces and repeating over-and-over again the same question. "Who the heck is that and where are his sleeves?"

All traces of good old Larry were quickly gone as Burr launched into a straight-laced and informative show. Lead Reporter Marty Smith was up first to update NASCAR news and lead into the story of young driver Brad Coleman.

Smith's lead-in really worked well for a liveshot with Coleman from the track with cars roaring by in the background. This young man is one of the best examples of what the NASCAR regional series can produce. Now racing in the Nationwide Series, Coleman is a well-spoken and intelligent driver with a good outlook on the sport and a bright future.

As I mentioned yesterday, one spot where NASCAR Now still comes up short is using the studio anchor to interview NASCAR guests. Why not allow someone in the sport fulltime like Marty Smith to handle the interview? Burr reads a good scripted question and is a solid show host, but putting the host in the analyst or "Insider" role is just tough.

Smith was available and could solve one very simple problem. Burr cannot follow-up on a guest's answer when there is a need to deviate from the script. Sometimes, it is very clear that a big follow-up question is just sitting there, and because Burr is still learning the sport it does not get asked. This is not a tough problem to solve.

DJ Copp has been fun since NASCAR Now brought him on the air last season. This pit crew member is simply an unassuming man who gets across a lot of quality information in plain and simple form. His update on the pit crews and the COT including the new NASCAR rules was right on target. What a good find for this show. It would be nice to see him create a feature for NASCAR Countdown relating to the Nationwide Series sometime.

Boris Said appeared again to update the new qualifying rule for the "Go or Go Homers" outside of the top 35. This was a timely reminder that this process is going to begin at California and was a smart move. Said is wonderful with his frank comments, and his talk about Toyota set a good tone. Burr is still learning, and his attempts to follow-up and "pin down" Said for his exact words did not work well.

Suddenly, "Larry" was back and his Viagra joke sent the show to commercial break on a very different note. Everyone knew one thing for sure, this next segment was going to be interesting.

Watching "Larry the cable guy" in the perfectly clean and high-tech HD studio of ESPN2 talking about the one and only Dick Trickle...great.

Watching Burr squirm while "Larry" talked about everything from kissing Jenny McCarthy to digestive issues caused by sausage overload...priceless.

What Burr and Boris Said talked about in the final segment did not matter. It was a nice confirmation of NASCAR's "birthday" and success, but no one is going to remember. There was only one thing that viewers will be talking about.

I ended the show not quite so sure why "Larry" had stopped by, but it left a picture in my mind. Burr was on one side of the studio in his buttoned-up suit in "perfect" ESPN mode. His guest was on the other side in a baseball hat, a sleeveless University of Nebraska T-shirt and blue jeans.

Up to this point in the TV series, the most exciting wardrobe malfunction had been Brad Daugherty not bringing a suit to the big Monday "roundtable" show. Heaven help us, Brad is wearing khaki! Allen Bestwick made the most of it.

You have to give NASCAR Now credit, they are trying all kinds of things to re-define these mid-week shows. It certainly would be nice, however, if they could break the "dead serious" ESPN mode and have some fun.

Once Burr started interviewing "Larry" about NASCAR, it was clear that some well-timed follow-up questions could have resulted in some more interesting NASCAR answers. Ask him about the Daytona 500, ask him about Tony Stewart, ask him about Toyota. He seemed to be very well informed on the sport and it showed.

NASCAR fans did not care about Brad's wardrobe malfunction, and they do not care that "Larry" is wearing a baseball hat indoors. What they want is more information and content, and less talking heads from all over the nation.

Marty Smith, Boris Said and "Larry" together would have made for one of the all-time best segments in NASCAR Now history. Simply by letting Burr toss-out a topic and then stand back, it could have been hilarious.

Instead, suits and nervous laughter prevailed as the script ruled the show once again. I have the feeling that NASCAR Now is just about ready to break-out of its shell during the week, and continuing to try new things is the right call.

"Larry" might be a fun guest to follow-up with, as he seemed to be a longtime fan and certainly someone that many of us enjoy watching. This season, NASCAR Now is simply full of surprises. I'll be back on Friday.

The Daly Planet welcomes comments from readers. Simply click on the COMMENTS button below and follow the easy instructions. There is nothing to join, and we do not want your email address. We just want to know what you thought of the Thursday version of NASCAR Now on ESPN2.
Posted by Daly Planet Editor at 6:55 PM 34 comments: