An All Wallace Monday On ESPN2 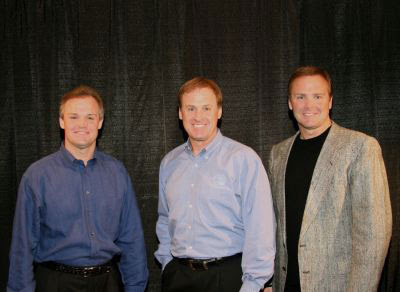 Rusty Wallace and his brother Mike spent Sunday at ESPN's headquarters in Connecticut. They appeared on NASCAR Now in the morning with Nicole Manske and then followed that up by helping ESPNEWS with the post-race analysis of MIS.

Monday night, brother Kenny will join the crew to make-up the three person panel that comprises the "roundtable" edition of NASCAR Now. Allen Bestwick hosts this fast-paced and very popular show that features a new line-up of panelists every week.

The program airs at 5:30PM Eastern, but in the past guests like the Wallace's have made appearances on First Take, ESPNEWS's The Hot List and ESPN Radio when they are in the building for NASCAR Now.

With this family not exactly known for their shy and quiet nature, it should be a rather raucous time to see this trio on-the-air. Kenny is well-known as the host of RaceDay and Victory Lane on SPEED. In ESPN's first season, this would have stopped the Wallace brothers show idea right in its tracks.

One of the most positive elements of this season's NASCAR coverage on ESPN has been the network's embracing of the multi-network concept for the good of the sport. Since February, there has been no problem mentioning SPEED or Fox or any of the other NASCAR media partners. In fact, many shows on SPEED and ESPN make a point to promote the other networks race offerings.

The brothers Wallace should be fun for Allen Bestwick. He has known this family for a long time and is currently in the middle of his best season on TV. Bestwick is the captain of this show, and his ideas and suggestions have resulted in a wonderful mix of NASCAR personalities parading through the set this season.

Bestwick has already made ESPN's position clear on the pending civil lawsuit against NASCAR. He and other ESPN announcers have carefully stated the known facts and then told viewers the network would follow-up when something new was known. This is not an issue for the Wallace gang, and certainly Bestwick will not offer it for discussion.

In each Monday show, there are usually two guests interviewed by satellite. One of them is often the winner of the Sunday race. If NASCAR Now can land Dale Earnhardt Jr. and let him be interviewed by the three Wallace brothers, the results could be memorable. A good suggestion for a second guest might be Mike's daughter Chrissy, who wants to make a Nationwide Series start as a driver this season and compete against dad.

Over on SPEED, it will be Michael Waltrip and Chad Knaus who will be joining host Steve Byrnes for another edition of This Week in NASCAR. Waltrip and Knaus have just started to jell, and because of their very diverse personalities have a lot of potential on this program. Regardless of your feeling on the preview before review issue, the show has started to come along nicely. It airs at 8PM.

Both these shows should make for some good viewing as everyone continues to talk about Junior and his win. Certainly, there will be some more stories developing from the race before these shows get recorded for air on Monday. There will be columns about both shows posted here shortly after they finish airing.

The Daly Planet welcomes comments from readers. Simply click on the COMMENTS button below and follow the easy instructions. The rules for posting are located on the right side of the main page. Thank you again for taking the time to stop by.
Posted by Daly Planet Editor at 11:11 PM 9 comments:

In-Progress At Michigan: Sprint Cup Series On TNT With RaceBuddy

The weather looks good for the start of the Sprint Cup race in Michigan at 2PM Eastern Time on TNT. Rain may threaten before the event is over.

It will be Bill Weber calling the play-by-play from MIS with Kyle Petty and Wally Dallenbach alongside in the broadcast booth. Larry McReynolds will be stationed down on the infield stage to offer commentary and use the cutaway car to help viewers with race-related topics.

TNT will again offer RaceBuddy, which is the online broadband application free for fans on their computers. Located at NASCAR.com, this service offers four live camera angles, scanner audio and email for McReynolds.

A similar application was used by TNT on the NBA playoffs, and it was a big hit. This version offers fans the ability to "play" on the computer while the TNT program is in-progress. Fan reaction was positive, and perhaps some future tweaks may involve the scanner audio and the in-car camera choices.

TNT's first NASCAR effort at Pocono resulted in a telecast that was solid in the commentary, but had trouble with technical issues. TNT lost the primary audio for almost ten minutes, and had intermittent issues with video and graphics. The NASCAR TV compound is hosted by the NASCAR Media Group and used by all of the NASCAR TV partners.

At MIS, look for McReynolds to once again provide the strategy options and for Petty to continue his strong performance in the booth speaking from a driver perspective. Petty's experience in the COT makes all the difference, since Dallenbach was long gone before these cars came along. Last week, Marc Fein was not on-camera during the actual race, it will be interesting to see what his role becomes this week.

Yes, TNT always uses the NASCAR races to promote its own programming, and MIS is no exception. Bill Engvall will be the Grand Marshall, and will be promoting his Bill Engvall Show before he gives the command to start engines.

Finally, the TV and Internet synergy continues with TNT announcers appearing on the post-race show live on the NASCAR.com site. This post race coverage starts after TNT leaves the air, and is free for all broadband computer users.

This post will serve to host your comments about the Sprint Cup coverage from MIS on TNT and RaceBuddy. To add your TV-related opinion, just click on the COMMENTS button below and follow the easy instructions. The rules for posting are located on the right side of the main page. Thank you for taking the time to stop by.
Posted by Daly Planet Editor at 10:16 AM 169 comments: