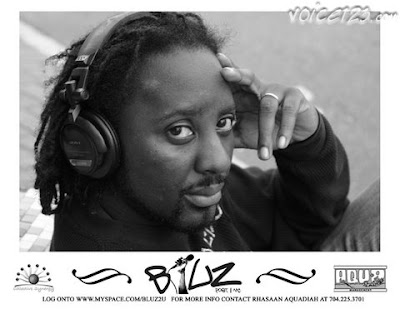 This season, we talked a lot about the various aspects of NASCAR TV, but some TDP readers wanted to know a bit more about the resident poet of NASCAR. After all, he got a lot of exposure this season with poetry previews of each Sprint Cup Series race for SPEED's RaceDay.

Boris "Bluz" Rogers has been quietly expanding the world of "poetry slams" beyond his native Charlotte, NC for the past six years. For those of you who may need to have your memory refreshed about his TV role, just click on the link below.

Here is the You Tube video of the Talladega slam.

The following excerpt is from a Charlotte Observer story about Rogers that ran earlier this year:

Boris Rogers didn't always dream of being a poet. His high school English teacher encouraged him to write down his feelings, told him he had talent. He did what she suggested, but he hardly expected to become the next Langston Hughes.

After high school, Rogers majored in communications and journalism at UNC Charlotte. That made sense to him. After all, his teacher had said he had a talent for writing.

Then tragedy struck -- the kind of tragedy that befalls all college students at some point. He laughs. "It's the old story: I met a girl, lost a girl, and that's when the writing really started flowing out."

His first poems were navel-gazers -- "really self-centered and depressing -- that kind of clichéd, `Why is this happening to me?' sort of thing," he says.

That's not the kind of thing the 31-year-old reads and writes today. Rogers, who performs under the pen name Bluz, is an acclaimed slam poet. Last year he ranked No. 13 in the world at the Individual World Poetry Slam contest held in Vancouver, Canada.

He's also the leader -- or "slammaster" -- of the award-winning CharlotteSlam (click here), the local poetry team that took first place in August at the National Poetry Slam in Austin, Texas. As slammaster of the team, Rogers coaches younger poets and hosts a regular poetry event at McGlohon Theatre on the third Friday of each month.

Click here for an easy link to a video of Rogers talking about his poetry style and how it all came to be.

Rogers has worked for many TV networks and production companies. The fact that The NASCAR Media Group brought him into the NASCAR world is a strong testament to the production values of that group. The results were fun to watch.

As we head into the 2009 season we will make a better effort to keep tabs on Mr. Rogers and his unique brand of NASCAR poetry. Thanks once again to the TDP readers who asked us to follow-up on his story.

The Daly Planet welcomes comments from readers. Just click on the comments button below and follow the easy instructions. The rules for posting are located on the right side of the main page. Thanks for taking the time to stop by.

Click here for a link to PoetCD.com, which has several of Rogers' CD's for sale.
Posted by Daly Planet Editor at 11:30 AM 71 comments: