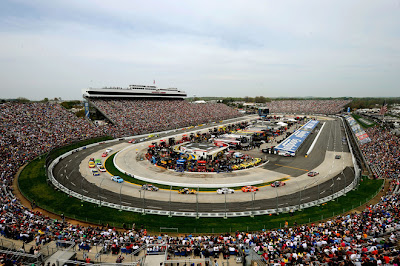 ESPN updated the weekend ratings from the Sprint Cup Series race at Martinsville. Here is the info:

That puts the final TV rating down some 22% from the previous year.

Texas is up next for ESPN. As we discussed here in several past columns, the Chase has handcuffed the TV coverage into a single storyline and the NASCAR fans and sports TV viewers are not buying it.

Talking about this topic does not make us bad NASCAR fans or enemies of the sport. As Mike Helton said in his Sunday interview on SPEED's Wind Tunnel, things tend to go in cycles with motorports and NASCAR is working on various changes to help the current negative cycle end.

This big dip in the TV ratings, despite the fact Dale Earnhardt Jr. raced and the small track made for good TV pictures, should certainly be a wake-up call. It's time to talk about making things better in terms of the final product delivered to TV viewers.

ESPN still has 11 on-air voices trying for air time in an event with no time-outs. Even with Tim Brewer and his Tech Garage parked, ESPN's attempts to integrate all these personalities on a short-track telecast was rough. Add-in the sponsored elements and in-program promo's and the result is short segment of coverage leading again to a commercial of at least two minutes in length.

Click here for a link to our friend Cheryl and her cawsnjaws.com website. It shows ESPN ran 31 of the 56 minutes of total commercials in the full-screen format. On this size track and with the Chase playoff in progress, there is little doubt that all commercial breaks during green flag racing need to be shown in the side-by-side format that is called ESPN Nonstop.

NASCAR will never defeat the NFL for total viewers because of the home team factor and the vast difference in the TV dynamics of the two sports. What perhaps could be done is to bring NASCAR into the current sports TV viewing culture by making substantive changes in the presentation of the Chase races on TV.

After the numbers for Martinsville, it certainly makes some sense to look at a wide variety of items to stem this tide of lost viewers. We welcome your opinion on this topic. Comments may be moderated prior to posting. Thanks for stopping by The Daly Planet.
Posted by Daly Planet Editor at 10:06 PM 31 comments: