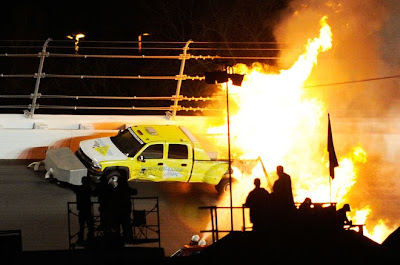 Sunday afternoon rained out and things were not looking much better on Monday morning. Shortly after 10AM, NASCAR announced that the Daytona 500 would move to 7PM and be carried live on FOX.

This was a memorable moment as the FOX local stations in all four US timezones had to make a hole for a live sports event where normally entertainment program series and local news would be scheduled.

On the East Coast, FOX lost the winter season finale of House and a new episode of Alcatraz. In addition, the length of the race would mean at least one and in some cases two local newscasts would be preempted on some FOX local affiliates.

It was a big statement about the commitment of FOX to the Daytona 500. Ironically it comes in a season when the network is about to begin negotiations with NASCAR on a new TV contract. The current agreement expires at the end of the 2014 season.

As there was no room for a pre-race show on FOX, sister network SPEED was used at 6PM with a one hour version of the Race Hub program devoted to just that. Mixed with some content from SPEED's Charlotte, NC studio the NASCAR on FOX team in Daytona did a good job of updating the situation as it stood.

Once the race got underway, an early incident took out former series champion Jimmie Johnson and dropped newcomer Danica Patrick from contention. Once again, Patrick did not speak to the media while repairs were made on her car in the garage area.

In this incident, FOX used an in-car replay showing Jimmie Johnson's car being hit hard right in the driver's door. While Johnson was then shown slowly moving around and disconnected the steering wheel, it certainly was not clear that he was not injured. Minutes later, FOX could have safely used that footage as Johnson was interviewed outside the medical center and confirmed to be uninjured.

Michael Waltrip and John Roberts manned the Hollywood Hotel and it was clear from the start that FOX got from the younger Waltrip exactly what they expected. He is an unabashed supporter of the sport and offers opinions and explanations freely. Since he is not in the role of lead analyst in the TV booth, his position as a team owner did not really play a role. Waltrip's presence was certainly a change of pace from Jeff Hammond.

Fans checked in after Darrell Waltrip's comments about Jimmie Johnson learning to take his hands off the wheel in an accident by watching Danica Patrick. Waltrip also tried hard to sell the fact that Patrick's driving skills were on display in the incident. That was a tough sell as the replay and spotter comments did not agree.

In typical Daytona style, now that the tandem racing is gone, FOX was back to covering pack racing even thought it was only two-wide. The director mixed in more aerials that we have seen in years past and the smooth production extended to pit road and restarts.

As the race went along, the fan comments turned from production of the event to the frequency of commercials. Since this was the first full Sprint Cup Series race on FOX of 2012, it was quickly a reminder of the heavy commercial load the network has to run. These events come with a big price tag and lots of commercials are the only way for a broadcast network like FOX to pay the bill.

Prior to the event, FOX announced that the final scheduled hour of the race would feature side by side commercial breaks that both TNT and FOX had used with success. Instead, the effect was rolled out during the big red flag for the jet dryer fire.

Once racing resumed, it appeared that FOX would only use this effect when the field was under the caution flag. Commercials during green were run in full-screen mode. It's frustrating to know that the TV network has the potential to do this for the entire race, but FOX was clear on the fact that sponsors are still not sold on this approach in terms of continuing to pay full price for an ad run in side by side mode.

Montoya's wreck with the jet dryer began a sequence that saw tired fans, media and drivers just want the race to end. Instead, several more accidents after the restart stretched the program well into Tuesday on the East Coast. This is clearly not what FOX wanted.

The overall production approach was similar to last season. FOX is less story-driven than ESPN, but loves the tight shots, especially from the in-car cameras. On this day, there were no complaints of single cars being followed mainly due to the pack racing dynamic.

At the finish, FOX used a wideshot and allowed all the lead lap cars to cross the finish line before cutting cameras. Graphics of the finish were also present, but tough to read due to the continued use of team colors. Perhaps this will change and the network will use an easily-viewed drop-down style graphic.

Where the FOX team really put on a show was in the replays. Incidents were replayed from so many different angles people were asking just how many cameras do these guys have? It was an impressive display of TV technology used in the right way.

After a long night of racing, we want your opinion of the NASCAR on FOX TV team's efforts. To add your opinion about the telecast, just click on the comments button below. Thank you for stopping by The Daly Planet. 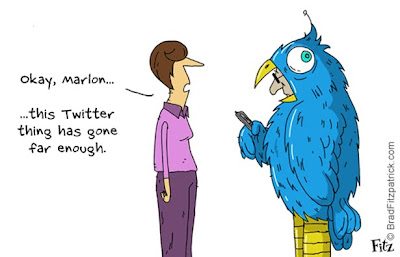 When we started this NASCAR TV and media blog in 2007 the preferred way for fans to contact NASCAR was by mail. In order to offer some feedback, fans had to locate the PO Box address in Daytona Beach that was hidden deep inside the NASCAR.com website.

Just five years ago NASCAR had no public email address, no Internet access and the only listed phone number was for tickets to International Speedway Corporation events. The NASCAR.com website was operated by Turner Sports and customer service was limited to online pay services.

While NASCAR has fine-tuned the COT, rolled out fuel injection and limited drivers to one series championship, the real revolution has been in opening a direct line of communication with the fan base. The sport is a true leader in the social media revolution now underway.

At the core of the current shift in providing content directly to fans is the social media service called Twitter. Its beauty is in its limitations. 140 characters of content have become the language of NASCAR. Instant links to pictures, online locations and topics within the sport flow from morning to night.

Through Twitter, the top drivers in NASCAR communicate directly with the fans. The TV personalities, reporters and media members offer instant information and answer questions. The teams, sponsors and tracks update content daily that is directly related to happenings within the sport.

The real beauty of NASCAR's relationship with social media is that no money changes hands. NASCAR carved a wide path by demanding payment for anything and everything associated with the sport for decades. Now, a little texting service originally designed for cell phones sends information about the sport worldwide for free.

It's not just the drivers and teams that use Twitter and Facebook to stay in touch with fans. NASCAR's TV partners came along grudgingly, but have now embraced social media as a way to accomplish a level of viewer interaction never before imagined.

The light went on for me several years ago during a Sprint Cup Series race on TNT. I complained on Twitter that the network telecast had not updated a driver formerly in contention who had pulled into the pits. Seconds later, Kyle Petty responded to my tweet over the air. In the next commercial break, he tweeted to ask me if that was the information I was looking for. I was sold.

65 year-old Darrell Waltrip now carries an iPad into the TV booth for his NASCAR on FOX races. Waltrip came to Twitter two seasons ago and got the hang of interacting with fans directly in a flash. That might run in the family, as brother Michael was one of the first NASCAR personalities on Twitter and paved the way for other drivers and owners to follow.

Save the talk about useless information, just a passing fad and not worth the time. The current impact of Twitter on NASCAR is bigger than anything the sport has ever experienced. As a totally portable communication platform, many drivers practicing at Daytona actually took their phones and Twitter along with them in the cars.

Last week, fans from home or work were chatting with Sprint Cup Series drivers sitting in line at the Daytona International Speedway waiting to go on the track. It was a fascinating exercise in the fundamental power of social media.

As NASCAR heads for Daytona, SPEED has already made a total commitment to integrating the fans, through social media, into that network's telecasts. FOX has followed along and expects to continue to develop a synergy with SPEED where interactive technology is concerned.

Our friends at ESPN operate under a corporate set of social media guidelines. This is simply due to the fact that the company puts out so much content of all types on a daily basis. Luckily, that does not interfere with the reporters and analysts talking about the happenings in NASCAR.

This year the door is open for fans to interact with even more NASCAR executives. Twitter also allows users to get official race information from the sanctioning body as it happens. Last year, after a pit road speed issue, NASCAR VP Steve O'Donnell tweeted a pic of the actual speeds as posted on the NASCAR computer. Case closed.

If some fans would rather just watch the races in peace without online interaction, that still works just fine. My only tip is that new TV's on the market are already coming with Twitter built into the screen. Like it or not, social media is here to stay and NASCAR's decision to embrace it is about to pay off in a very big way.