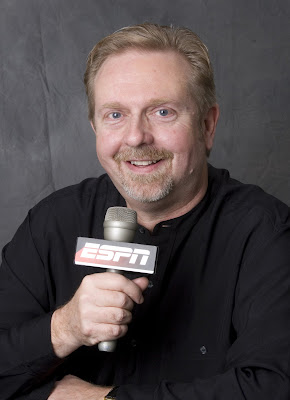 Update #2: I will be joining Dave Moody on Sirius Speedway Wednesday afternoon at 4:40PM to talk about some NASCAR TV topics, including the one contained in this story. Please join us on Sirius Channel 128 at 4:40PM Eastern Time for some live conversation.

It was February 26th when reporter Terry Blount appeared on NASCAR Now with "breaking news." His news was so important that it was the first story on the program with a big "breaking news" graphic on the screen.

It was only hours later when his "news" was revealed to be completely full of holes. The link to the column that appeared on The Daly Planet that day can be read by clicking here. Nothing that he reported was anything more than bad gossip and ridiculous speculation.

Needless to say, it took the International Speedway Corp. about five minutes to issue a terse release saying there would be no changes at "their" speedway in California. It took less time for other analysts and reporters to point out that any experienced NASCAR journalist would never have gone on-the-air with that information.

Such is the fine line that NASCAR Now has only crossed once or twice this season. The one where hardcore reporting and expert analysis give way to the dark-side of NASCAR journalism that most reporters detest. Gossip and unfounded allegations that are rushed to the national TV airwaves before common sense is allowed to prevail.

Monday, Allen Bestwick led a panel of three through a one hour version of NASCAR Now from the Bristol, CT studios. There was no dark-side reporting and no unfounded gossip. Instead, there was fun and conversation and the one thing that NASCAR Now has been trying hard to build since February's Daytona 500. That is credibility.

Host Nicole Manske led Tuesday's NASCAR Now directly to Mr. Blount once again. This time, Blount had been assigned the task of trying to sell magazines for ESPN. In all of the hype that fans witnessed on this TV series in 2007, there may have been nothing to top this effort.

Suddenly, Blount was revealing that Jack Roush found a Roush-Fenway part on a Toyota car in the garage area. Roush alleges that it was a part that his company created, and suggests in so many words that it may have been stolen. What a NASCAR bombshell. Imagine, a story this big breaking on a Tuesday afternoon.

Unfortunately, here is the reality. This story was not breaking and had nothing to do with Tuesday's NASCAR news. It was simply planted in NASCAR Now to sell ESPN the Magazine.

Like a fifth-grader trying to make enough money for the big class trip, Terry Blount was at your door and really needed you to buy it now. Twenty-six issues of ESPN the Magazine for only $26.

The line in ESPN-owned Jayski.com says it all. "ESPN the Magazine has an interesting and potentially explosive quote from Roush-Fenway Racing co-owner Jack Roush as part of its 10th Anniversary issue, which is on newsstands this week."

Imagine that. You can buy ESPN the Magazine to see the actual article that talks about the two-week old quote from a car owner who is still steaming at Toyota for comments earlier in the season. Surprisingly, the Roush story is about Toyota allegedly doing bad things to him.

There were thirty-four comments on the ESPN.com page about this story late Tuesday night. Fans suggested that the stolen part may have been an oil-cooler lid or perhaps the gas pedal from the 26 car, which apparently is missing. Words like "sour grapes, whining and even pre-school" were featured in the ESPN comments.

After a Monday of wonderful NASCAR conversation and information, this story caused me to turn-off this program for the first time in two years. Going from Bestwick, Marty Smith, Brad Daugherty and Andy Petree to this reporter selling junk once again as truth did me in.

Regardless of how slickly Blount worded his script and regardless of how delicately he skated around the timeliness issue, this was a planted story aimed at selling magazines. Regardless of the actions of Jack Roush in the future on this issue, it was presented to try and drive NASCAR fans to another ESPN property.

Over at the SPEEDtv.com message boards, one reader said very clearly what many people were thinking. "If Jack actually made these comments at Atlanta why did no media outlet other than ESPN The Magazine report it? They had no problem reporting the rest of his accusations against Toyota, why not this too?"

All the good will and outstanding content generated by the Monday show now has a black could hanging over it from this repeat of the dark days of 2007. Erik Kuselias and Doug Banks may be distant memories in the minds of many fans, but Terry Blount has drawn the short-straw this season.

The "hype" he has been offering may serve once again to motivate fans to simply skip this TV program and go directly to the Internet for their NASCAR content. NASCAR Now needs to understand that a direct alternative to their efforts is at the fingertips of every fan, and does not require them to tune-in at 5:30PM.

Update #1: Here is the link to Dave Moody's blog story that some of you have been asking about. His original words are the ones I listed from Jayski in reference to this topic. Just to make sure we are all on the same page.

The Daly Planet welcomes comments from readers. Simply click on the COMMENTS button below and follow the easy directions. The rules for posting are on the right side of the main page. Thanks again for stopping by, and sharing your opinion.
Posted by Daly Planet Editor at 9:42 PM 49 comments: