Petty On A Long Road To Michigan For TNT 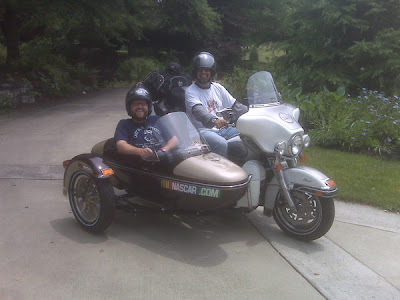 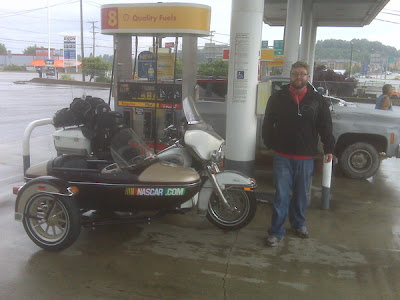 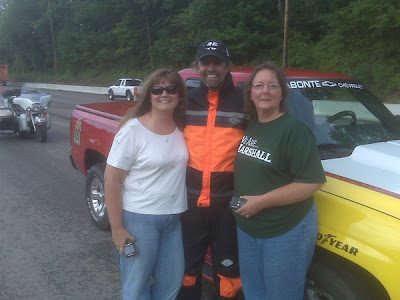 Trip number one is over and trip number two is in-progress. Kyle Petty is making good on his promise to ride his motorcycle to all six of the TNT races. These pics show Petty and his sidekick SPEED's Rutledge Wood leaving from North Carolina for Michigan, stopping for gas along the way and finally being located by some NASCAR fans using Twitter.

Petty has pushed the new media envelope this season like never before where NASCAR on TV is concerned. He first documented his most recent charity ride and now is aggressively pouring time and effort into pumping-up the NASCAR on TNT races.

It only takes a couple of minutes to sign-up for Twitter and for NASCAR fans it certainly seems to be worth it. All it does is offer updates from the folks you choose to follow. No spam, no email and nothing you don't control. It is free and there are tons of NASCAR drivers, tracks and websites (like TDP) who post information, story links and pictures. Click here for a great list.

With all the tough economic times and sad stories like Johnny Benson and Jeremy Mayfield, the Petty summer travels are a nice positive change of pace. Dubbed "The Ponytail Express" by Kyle, this is first-hand proof that someone in the media is putting themselves out there for the fans to see.

The TNT guys are calling Happy Hour practice on Saturday and then handling the Sprint Cup TV duties on Sunday. In addition, Petty and Wood continue to tape the NASCAR Smarts trivia show that essentially replaced the Tradin' Paint series on SPEED.

Even with his weekly opinion show gone, Petty is zooming ahead by skipping right by the media, his producer and even the NASCAR brass. Before, during and after the time he is on TV, Petty is actively commenting, taking pictures and asking questions of the fans directly.

This past weekend, Petty snapped pictures of everyone from Larry McReynolds to Mike Helton during the pre-race show and then asked for questions from the fans during the commercial breaks. During the race, fans would ask about issues like "mystery cautions" and "phantom debris." Petty piped right-up and asked his fellow announcers and the producer why the caution flag waved. How is that for service?

At Michigan, TNT is going to have Detroit native Kid Rock stop-by the pre-race show. Also, Richard Childress and Clint Bowyer will appear as guests. Fox's Darrell Waltrip will be featured on the Pride of NASCAR series while reporter Lindsay Czarniak goes into Race Control to find out how they figure out the new double-wide restart order.

Ralph Sheheen drew the lucky card and gets a personal tour of Jack Roush's private garage. Roush is all about cars and this is going to be a great peek into his personal car collection. Finally, Wally Dallenbach gets to explain MIS when he is superimposed over race footage in the new version of Wally's World.

Once the race is over, the TV crew and the NASCAR teams will be rushing for the airport to get home as soon as possible. For Petty and Wood, they will be staring at a pending trip to Sonoma, CA and then a return trip all the way to Loudon, NH.

Maybe like Alicia and Barbara above, you might wave hello or stop and say hi if you spot this crazy pair zooming by as they follow the NASCAR trail for the next couple of weeks. It's just nice to have some of the focus back on the fun side of NASCAR and the free spirits that still exist in the sport.

TDP welcomes comments from readers. Just click on the comments button below to add your opinion on this topic. This is a family-friendly website, please keep that in mind when posting. Thanks for stopping by.
Posted by Daly Planet Editor at 9:00 PM 12 comments: