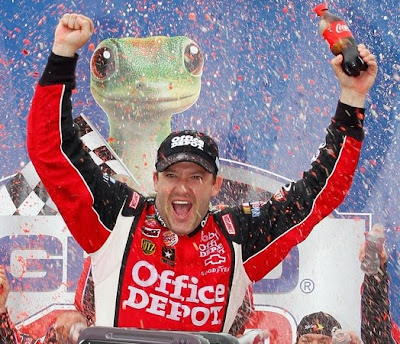 The weather cooperated but the racing did not. A dry track sent cars out again for what fans have seen too many times. An aero race where pit road, restarts and fuel mileage made the difference.

The race started on time with no weather delays. There was a competition caution early on to check tire wear. Several times during the race a debris caution came out and TV was unable to show the debris on-camera.

ESPN resumed it's signature style of producing NASCAR races. Tight shots of small groups of cars dominated the telecast. The focus of the coverage was moving between individual battles on the track mixed with following the leader and using in-car cameras.

"Hyper-tight" is a term we coined last season for the style of coverage that ESPN uses for the Sprint Cup Series races. Time and time again, the camera zooms to the tightest possible shot of two cars racing for position. This eliminates any perspective of where on the track the cars are racing or who else is racing around them.

Bestwick is put in the position of talking about the cars the director and producer have chosen to put on the TV screen as opposed to calling the race by looking out the window of the TV booth. It has affected his ability to add excitement to the telecasts.

Petree was once again more outspoken than Jarrett, who has seemed to embrace the politically correct NASCAR environment. Petree is key at adding strategy comments to the telecasts and he is not afraid to call a team out for making a bad decision.

Bestwick has taken to calling these type of events "strategy races." He is politely saying there is very little racing involved and most of the decision making is done on pit road and by the crew chief. Fuel mileage is dominating the racing.

ESPN Nonstop was used in the second half of the race. It lets the race video continue on the screen. Fans kept suggesting that more commercials had been added, but that is not the case. Same amount as usual in these telecasts.

Ultimately, the race came down to fuel mileage. ESPN let Stewart cross the line but was unprepared for the rest of the cars running out of fuel on the track. Most of the top finishers were missed and the sequence on TV was just chaotic. Once again, pit reporters were talking to drivers about a finish TV viewers never saw.

This post will serve to host your comments on the ESPN coverage of the Sprint Cup Series race from Chicagoland. To add your TV-related opinion, just click on the comments button below. Thanks for stopping by.