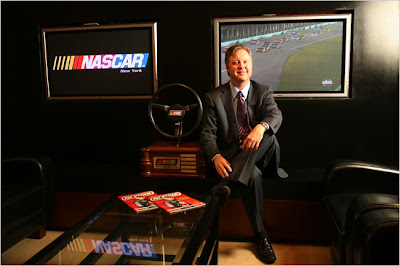 Updated: This post was originally the live blog from the "State of the Sport" adddress delivered by Brian France Wednesday night. In order to let readers who did not watch this presentation understand what happened, I am leaving this original post up so you can review the comments. Just click on the comments button below.

In essence, France presented a rambling non-scripted explanation of the new points system. He reviewed some other changes and then took questions from the media. Unfortunately, the NASCAR.com feed failed in the middle of his remarks and on location there were also audio and video failures. It looked like only one camera was working in the venue.

SPEED TV actually left the live press conference as media members asked key questions so Darrell Waltrip and Jeff Hammond could give opinions on Race Hub. Ironically, Waltrip was very interested in what was being asked by the reporters. He must have been watching online. Despite everything going on, Race Hub closed the show at 8PM.

ESPN gave France some live coverage on SportsCenter and then moved on after several minutes as France continued his obtuse style of speaking. Several drivers called in to offer initial reaction to the changes, including a very informative Jeff Burton.

Please feel free to add your comments on the day after the big press conference.

Here we go with the first live blog of the season. NASCAR.com begins streaming from the NASCAR Hall of Fame at 6:30PM and will carry the entire live press conference. SPEED's "Race Hub" will join live at 7PM and carry Brian France's remarks.

After France is done, it will be Darrell Waltrip and Jeff Hammond with host Steve Byrnes in the SPEED studios to discuss this topic. Waltrip and Byrnes, as well as the Race Hub program are very active on Twitter. Hopefully, fan comments will be included.

No one really knows what France has in mind tonight. Points were not a hot topic after last season, but that issue has risen to the top of the board as far as the media is concerned. NASCAR's top executives also said last week that France was still in the process of determining how the Sprint Cup Series would be structured this season.

This should be an interesting night. We welcome your comments before, during and after France's remarks. This is a family-friendly website, please keep that in mind when posting. Just click the comments button below to post and use the refresh function to see new comments being posted. Thank you for stopping by The Daly Planet.