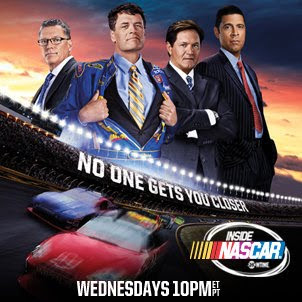 It's been a topic here at TDP since 2007. Starting with the day that the first blog post was published, there have been strong feelings about current Sprint Cup Series owners who are actively involved in shaping the sport on TV.

This week, the lead news story was Marcos Ambrose. His self-induced problems at Sonoma kept him from winning the race. Ambrose was gracious enough to speak with several reporters after the event, including TNT's Marty Snider on the live telecast.

Wednesday, Abrose was a guest on Showtime's Inside NASCAR program. The series is hosted by Chris Myers and features veteran journalist Randy Pemberton on the panel. The other two members of the TV cast are very familiar to Ambrose. Brad Daugherty is his team owner and Michael Waltrip supplies his cars.

Earlier, Daugherty appeared on ESPN2's NASCAR Now. Host Mike Massaro made sure to preface his questions by asking Daugherty to either put on his owner or TV analyst hat. That made the interview passable, but it was awkward at best.

This is the first season in NASCAR for Showtime. They have the Inside NASCAR series being produced at the Hall of Fame studios owned by NASCAR in downtown Charlotte. There is little doubt that NASCAR also "helped" the network to select a nice group of on-air announcers that met NASCAR's desires.

Waltrip is remembered by many for being on the longest running NASCAR TV series in history. Under several titles, the Monday night hour on SPEED ended its life as This Week in NASCAR. It had two or three panelists and one host. They reviewed highlights, talked about topics and had some fun.

Inside NASCAR has a new set, a new host and a new TV network. Unfortunately, that has not calmed some folks in the fan base. The popular belief is that NASCAR just stirred the soup a little bit and served up TWIN to Showtime with some new faces.

The show has been entertaining, but Showtime is just not the right network for the series. A small TV universe for Showtime of only 17 million homes makes the percentage of those that tune-in for Inside NASCAR very small.

Daugherty and Waltrip have a track record on TV, but both have also decided to make a go of it as owners in the Sprint Cup Series. Having Jack Roush and Rick Hendrick on the Inside NASCAR panel every week would make folks uncomfortable. How is it then different with Waltrip and Daugherty?

The bottom line is that Waltrip and Daugherty risk affecting their ownership situations in the garage when they directly offer critical comments on other teams, drivers and crew chiefs. On the TV side, there is no doubt that during the course of a ten month season there are going to be moments were critical comments are called for due to the circumstances.

Ambrose is a nice guy, has a good perspective and will be fine. The real issue is that in these situations Daugherty and Waltrip are forced to toe the polite NASCAR party line instead of trying to draw more facts and emotion from an interview subject like Ambrose. There is simply too much on the line.

Inside NASCAR has found that Pemberton is a gem of information and strong viewpoints. The network has also found that Daugherty is not. Waltrip continues to try and cover all the bases as a strong advocate of NASCAR in almost every situation. It's an interesting mix.

If you had an opportunity to watch the program, how about telling us your feelings on this issue from that perspective. If not a Showtime subscriber, have your issues changed on the NASCAR owner on TV topic? Is it just a part of the sport? Can fans just tune-out the politically correct comments?

With the recent appearances of Rusty Wallace in the ESPN TV booth and Phil Parsons on pit road for TNT telecasts, even more NASCAR owners are actively shaping the way fans see the sport on TV. It begs the question if this is really fair?

To add your opinion, just click on the comments button below. This is a family-friendly website, please keep that in mind when posting. Thanks for stopping by The Daly Planet.
Posted by Daly Planet Editor at 5:00 AM 28 comments: