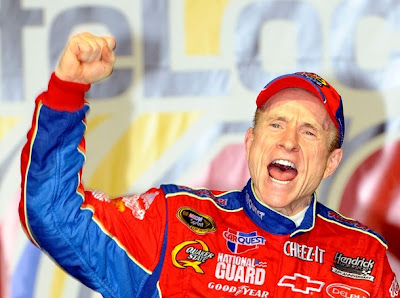 By now, fans are used to talking about the two Monday NASCAR TV shows. However, this off-week for the Sprint Cup Series brought some new faces to the TV screen.

The ESPN producers have mixed personalities on this program for the past several season with interesting results. This year, gone are the theme shows that have featured all three Wallace brothers, retired drivers like Terry Labonte and non-NASCAR reporters like Tim Cowlishaw.

In their place have been solid programs that offer a lot of information and commentary packed into an hour. The steady influence has been Bestwick. Click here for a reminder of the fan reaction the first time he hosted an episode of NASCAR Now.

Boris Said was surrounded by some pretty sharp cookies in Craven and Blount. As an infrequent visitor to the program, Blount held his own and offered some solid first-hand observations on issues from post-race tempers to Tony Eury Jr. being at the racetrack and talking about the other Junior.

"I stood there with him (Eury) for at least twenty minutes," said Blount. "There were times where I actually thought he was going to break-up. I think he is hurting, really hurting, about what happened there. But, he did agree it was time for them to split up."

"With these double-file restarts, there are going to be a lot less Christmas cards going out," joked Said about the Chicagoland issues. Craven said the new tendency for drivers to try and get spots back in just one corner "is a recipe for disaster."

When the discussion turned to Kyle Busch's Sprint Cup problems, Said and Craven also had different opinions. "I think it's partly because he races so much," said Craven. "The fact is that if you are going to beat Jimmie Johnson for the Sprint Cup Series title, I'm afraid you have to give some more attention to these guys in the car during practice. If you don't, you risk having a weekend like he had."

"I disagree, Ricky," exclaimed Said. "Last year he (Busch) raced like every single weekend and he did great. But, what's different this year is there is no testing. I think the teams that have the engineers and the computer models have a clear advantage."

Mark Martin appeared by satellite from his Florida home. Unfortunately, Bestwick was the only panelist who got to ask questions. I am told this is a logistics issue, but any interview is more diverse when all the panelists are allowed to participate.

One thing sorely missing from This Week in NASCAR on SPEED has been a live interview. After eliminating a panelist and having only two voices on the show, the lack of an interview means lots of video played back between discussions.

Chad Knaus and Michael Waltrip were joined this Monday by Ralph Sheheen filling-in for series host Steve Byrnes. After teasing that Byrnes needed SPF-55 sunblock on the beach, Sheheen turned his attention to the Chicagoland event.

Waltrip brought his sense of humor and Knaus his eye for detail, but there was a whole lot of NASCAR cheerleading going on. "If you are a racing fan, you could not have been happier with the way that race developed at the end," said Knaus. "It's cool, it's fun, it's what people pay to see," exclaimed Waltrip. "And we are providing it."

"Lot easier to be saying how crazy it was when you know you are not doing it full-time anymore at the end of the season," said Sheheen to Waltrip. Point made.

Knaus was left to explain how his Hendrick teammate Mark Martin ran away on the track. His response was a reminder that this season the COT has been mastered by many teams and the competition and frustration levels are higher than ever before. "Don't you want all your stars mad?" asked Waltrip. "You want them to be on the chip."

Where Kyle Busch was concerned, Knaus suggested it was up to Joe or JD Gibbs to step-in and rally the troops on that team. "You don't know where leadership is going to come from," added Waltrip. "Somebody better step-up or one of our premiere teams ain't going to be chasing for a championship."

Sheheen wound the program down with a discussion of Indy. Waltrip used it for some humor. "I remember in 1995 when Dale Earnhardt Sr. won The Brickyard the year after Jeff Gordon had won it," said Waltrip. "And Dale said he became the first man to win The Brickyard." For veteran fans, the look on Knaus' face resembled that of Allen Bestwick on the vintage days of Inside NEXTEL Cup.

Gordon took some more teasing when Sheheen mentioned that Waltrip was going to be working on SPEED's Camping World Truck Series race Saturday night while most of the Sprint Cup teams are on vacation.

"Jeff Gordon goes to St. Tropez and Chad Knaus to the West Indies. I'm going to Sparta, KY on my off-week," said Waltrip.

NASCAR fans got two hours of TV on Monday that gave them lots of information and commentary. It certainly is interesting to see how the style of these shows continue to go in different directions even as they cover the exact same topics.

What program did you like on Monday and why? TDP welcomes your comments. Just click on the comments button below to add your opinion on this topic. This is a family-friendly website, please keep that in mind when posting. Thanks for taking the time to stop by.
Posted by Daly Planet Editor at 7:00 AM 27 comments: 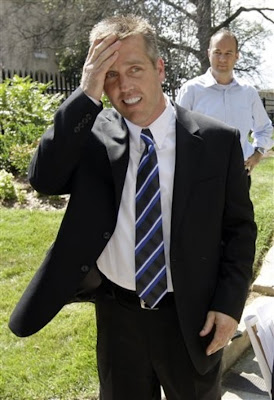 Updated: No Tuesday info from NASCAR on the drug test given to Jeremy Mayfield eight days ago. Dr. Black, the head of the drug testing company said to the media that the result would be available on Friday.

Update #2: Click here for a nice follow-up story from Bob Pockrass at scenedaily.com that re-states what is going on and tries to offer some possible explanations.

Update #3: The possibility exists that the delay in the Mayfield information may be from additional testing of the (second) B sample. This was also mentioned by David Newton on Tuesday's NASCAR Now program.

Update #4: Mayfield's General Manager Bobby Wooten has resigned, but not without strong words in support of Mayfield and against NASCAR's drug testing. Click here to read what this former police officer had to say about the meth issue. It's fascinating.

The saga of "Wrong Way" Jeremy Mayfield continues with the NASCAR media very clearly stuck in the middle of a mess.

Last Monday, Mayfield was drug tested three times. The final time was at his house by the NASCAR drug police after a full day of complete chaos. Click here to review that story from Bob Pockrass at Scenedaily.com.

By testing Mayfield on Monday, NASCAR would have the results back on Friday. Some believed that was done to then make an announcement at the Chicagoland track of Mayfield's continuing drug problems. Instead, NASCAR related to reporters that Mayfield's results were still being analyzed and said nothing more.

So, the entire Chicagoland weekend came and went with Mayfield only being briefly mentioned by TNT's Marc Fein during the Sprint Cup Series pre-race show. While that was a relief to fans tired of this drug testing debacle, it also means that NASCAR still needs to provide some information.

Simply by saying that Mayfield's sample is clear, NASCAR will be making a statement that is certainly going to shake things up in the sport. By making the statement that the same meth problem was found, the sanctioning body will be confirming faith in the initial results that started this saga.

Either way, Sunday or Monday the next page in this mishandled public relations disaster may unfold. All the while, ESPN is tightly sitting on the footage of Dr. Gary Wadler from the World Anti-Doping Agency who was an earlier guest on the NASCAR Now program.

Wadler clearly said NASCAR's drug testing policies would not hold up in court when challenged. He explained the reasons why and was clear in his perspective that NASCAR had overstepped the legal boundaries of drug testing professional athletes. Since the time that Mayfield won his temporary injunction, that footage has never been used.

This Week in NASCAR on SPEED has steadfastly refused to deal with this topic. That leaves Allen Bestwick and his NASCAR Now Monday roundtable program to handle whatever information is revealed by NASCAR. Ricky Craven, Boris Said and reporter Terry Blount make up the panel this Monday.

Blount, Marty Smith and David Newton have been very good about relating facts in this case and adding-in some personal observations. Whatever NASCAR says or does not say on Monday may either end this issue or cast additional doubt on the results of the original test.

NASCAR Now is at 5PM ET and repeats at 9:30 Pacific. This Week in NASCAR is at 8PM and re-airs at midnight. ESPNEWS carries breaking stories during the day and TDP will pass along any media information on this topic as it happens.

We welcome your comments. To add your opinion on this issue, just click on the comments button below. This is a family-friendly website, please keep that in mind when posting. Thanks for taking the time to stop by.
Posted by Daly Planet Editor at 6:30 AM 69 comments: