The buzz on the street and in the Sirius Satellite Radio forum is that John Kernan is leaving his job hosting The Driver's Seat and relocating to Chicago, IL.

The Driver's Seat is produced by PRN, and aired on Sirius. Kernan is moving for family reasons, and he is going to be unable to do the show from his new home-base in Chicago.

This does make Kernan available for some additional weekend TV duties beyond his limited NHRA commitments. It certainly would be interesting to see Kernan sitting in the Infield Studio at Daytona for the first Nationwide Series race. That would get a big fan reaction.

Kernan has been a steady voice in the sport for a long time, and seems to have the type of personality that lends itself to simply "directing traffic" as a host and letting the other guests and announcers shine. That certainly is rare these days.

Kernan's departure from PRN and Sirius brings another interesting scenario to mind. If Kernan moves to the Infield Studio for the Nationwide races, will that mean Suzy Kolber will be doing the "top end" interviews for the NHRA coverage?

The Daly Planet welcomes comments from readers. Simply click on the COMMENTS button below, and follow the instructions. Please read the rules for posting on the right side of the main page before adding your comment.
Posted by Daly Planet Editor at 8:53 PM 20 comments:

Your Christmas Present For The NASCAR TV Networks? 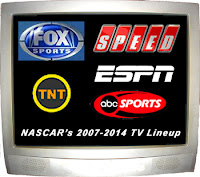 Sometimes, those people that seem to already have just about everything anyone can think of are hard to shop for at this time of the year. Ties, mugs, front door mats and socks with batteries just don't seem to measure-up where this group is concerned.

On the NASCAR TV Christmas List we have four names. ESPN, SPEED, TNT and Fox Sports. They each come with their own family, and each have very nice homes in California, Georgia, Connecticut and North Carolina.

This Christmas, it will be the first time that this group is sharing something together. In 2007, they all joined as one to comprise the group known as the NASCAR television partners. If you watched NASCAR, you met the group.

As we approach the week before Christmas, it might be a good time to think about the past year, and perhaps suggest something that we could give to the members of the group to make 2008 a better year. It's our NASCAR TV Christmas List.

ESPN seems to already have a lot of "stuff," so maybe something other than even more "stuff" would be a good idea. SPEED, on the other hand, has some very fundamental things that it needs for 2008. It might not be too hard for regular readers of The Daly Planet to guess what is going to be on my list.

TNT is in Atlanta, which is a wonderful city. Since TNT stops by the NASCAR scene for only a couple of weeks in the summer, it might be a good idea to suggest a gift that made sense for that time of the year. It seems to be the only time they are around.

Fox Sport presents a big problem. They seem to have it all, and as the senior member of the group they need a gift with meaning. Hollywood Hotel coffee mugs are out.

As NASCAR fans, what one gift would you give to the four NASCAR TV partners that could make them have a better 2008 season? It's the time of the year for sharing, so how about letting us in on your ideas?

The Daly Planet welcomes comments from readers. Simply click on the COMMENTS button below, and follow the instructions. Please read the rules for posting on the right side of the main page before adding your comment.

Thanks again for taking the time to stop by and fill out this 2007 Christmas List for the NASCAR TV partners.
Posted by Daly Planet Editor at 11:59 AM 16 comments: