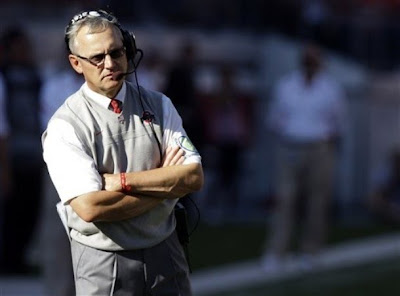 At the beginning of the year, it appeared that NASCAR would once again take it on the chin. Where TV ratings were concerned, it had been a four year steady decline.

In 2010 the NFL had wiped NASCAR off the map where September through November ratings were concerned. Since then LeBron James had made his "decision," took his talents to South Beach and drove NBA ratings through the roof. It was not looking good for the left turn gang.

But a funny thing is happening as June approaches. The landscape of the many sports we classify as "stick and ball" is changing. It is not a change for the better. The list of ongoing problems and developing situations is amazing. The latest crisis just hit Monday afternoon.

Here is a brief overview of some current issues:

NFL: No end in sight to an ugly lockout by the owners. At the present time, there will be no NFL games come September. The argument is over approximately nine billion dollars in revenue to be divided between the teams and the players. The owners say they are prepared to sacrifice the entire season if needed.

NBA: Commissioner David Stern has stated 22 of his teams are on track to lose an estimated total of $300 million this season. There is little doubt that the NBA and the players are also headed for an extended lockout after the season is over.

MLB: Teams in the two largest TV markets, New York City and Los Angeles are in crisis. The New York Mets are on track to lose over $50 million dollars this year and may face bankruptcy. Commissioner Bud Selig was forced to take over the day-to-day operations of the Los Angles Dodgers. Team owner Frank McCourt recently had to take a $30 million dollar loan from LA-based FOX (TV) just to meet payroll.

Golf: Tiger Woods is on crutches. His lower left leg is in an orthopedic boot and he is unable to hit a golf ball. He failed at the Masters, pulled out of the Players Championship and has just withdrawn from The Memorial. There is no firm date for his return.

NHL: An outstanding playoff game seven between Boston and Tampa Bay drew very high viewership in those two TV markets, but only slightly over two million total viewers nationwide. While Comcast/NBC has secured the NHL rights for the long term, several years on the VERSUS TV network has left the sport in a lurch.

The most recent bombshell may start a very fundamental change in the perception of major college athletic programs. Click here to read the Sports Illustrated feature article detailing the amazing happenings within the Ohio State University football program.

Highly-regarded head coach Jim Tressel, who is pictured above, resigned on Monday. Reports suggested his only other alternative was to be fired. Tressel was trapped within a corrupt and unworkable system that major college football coaches around the country deal with every season.

Tressel basically ran a business that made millions of dollars for the university and gave only scholarships to the players. Decades ago, this might have been a trade that made sense. In today's reality, nothing could be further from the truth.

"Big-time college athletics appear to be spiraling out of control," says Pete Thamel of the New York Times in a Monday story. "Tressel’s resignation is the headline in a year that has had major investigations of the national champions of football (Auburn) and of men’s basketball (Connecticut)."

Meanwhile, back at the ranch, NASCAR has had three very different stories unfolding over the past two weeks.

First, Dale Earnhardt Jr. was leading on the final turn of the final lap of the most recent Sprint Cup Series race in Charlotte. His running out of gas made local sports TV highlights nationwide and was the lead story on ESPN's SportsCenter.

Secondly, superstar bad boy Kyle Busch was clocked at 80mph over the speed limit in a hot car with his hot wife in his own neighborhood. He wound-up with just a ticket, but news of the incident went viral. In a flash, the story was global. Imagine that, a NASCAR driver speeding down a two-lane Carolina road.

Finally, former Formula-1 driver Kimi Raikkonen decided he would like to sample NASCAR. His huge international fan base watched Raikkonen hold his own in a Camping World Truck Series race in Charlotte and finish 15th on the lead lap. The next weekend, he returned for a rent-a-ride in the Nationwide Series. Suddenly, rumors are swirling that "The Iceman" is coming to NASCAR with Red Bull in tow for 2012.

What an incredible swing of momentum for NASCAR through an amazing set of circumstances. You just can't make this up. The NFL is on strike with the NBA set to join them. The world's top golfer is injured, hockey can't get TV viewers and the Dodgers and Mets are essentially bankrupt.

As if on cue, NASCAR's top series heads to a sellout crowd at Kansas Speedway next Sunday afternoon. Saturday's truck series race may not have Raikkonen, but it is also sold-out. It will be fascinating to see if the sport can continue to build momentum, increase attendance and continue to slowly push up TV ratings.

Sometimes, things just happen. If there was ever a weekend for NASCAR to put on a good show, this might be it. You just never know what the ultimate reward for that might be.

We invite your comment on this topic. To add your opinion, just click on the comments button below. Thank you for taking the time to stop by The Daly Planet.