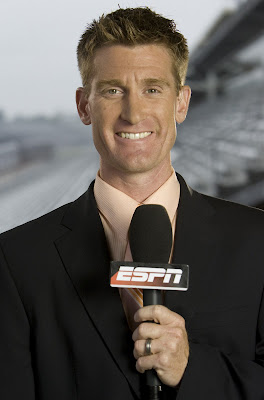 Wednesdays on NASCAR Now have sometimes been a little slow. The weekend highlights are now old, the next race is days away, and there is usually not a lot of news.

NASCAR Now's Lead Reporter Marty Smith returned from a recent vacation with some information that served to spice-up this Wednesday in a very big way. The Tony Stewart empire was beginning to shake, and Smith knew the reason why.

Since the Joe Gibbs move to Toyota, racing veterans have been wondering how Stewart was going to balance his long affiliation with GM and his new high-profile role with Toyota. Smith's news was that Stewart was trying to explore his options to get out of the Gibbs stable at the end of this season.

In the past, this type of story on NASCAR Now would have ended right there. This season, however, ESPN has committed to using all their NASCAR veterans to support this TV series and that is exactly what happened. It was Dale Jarrett who appeared next to speak directly to Smith's report and the Tony Stewart situation.

Jarrett's opinion carries a lot of weight, and he spoke about the fact that Stewart may have been approached by a Chevy team that perhaps put an ownership stake on the table. Jarrett's perspective was that Stewart was now in a different time in his racing career, and his priorities may have changed.

Without missing a beat, host Ryan Burr brought-in Daytona 500 winner Ryan Newman with the Talladega Superspeedway looming. Newman continues to be a great interview for this program, and once again spoke about a wide variety of topics with candor and honesty.

The previews of Talladega began with Jarrett talking about the upcoming COT race. He mentioned the new surface and the drafting while calling the racing "intense." He pointed to a key to success being patience, something he mastered in his career. Having Jarrett preview this event was exactly the type of high-profile personality that is going to make viewers tune-in on what is normally a slow Wednesday.

Reporter Jamie Little stopped-by to review her win in the Toyota Celebrity Race in Long Beach, CA. After a brief recap, she moved on to handle the story of Kevin Harvick not racing in the Nationwide Series at Talladega at the request of Cup team owner Richard Childress.

Little also updated the status of Kyle Busch and his possible change in direction to focus on running the entire Nationwide Series. To add commentary to this issue, Burr then turned to Brad Daugherty.

Outside of the Monday one hour version of this show, Daugherty is struggling to find his role on the 2008 ESPN NASCAR team. With the addition of Dale Jarrett in the booth and the move of Rusty Wallace to the Infield Studio, Daugherty is overshadowed by experienced professionals everywhere he turns. Even the best efforts of Allen Bestwick are not enough to help Daugherty with his struggles.

On this show, Daugherty "guessed" that Kyle Busch will run the entire Nationwide Series schedule despite having absolutely no information on that topic. He offered an opinion that Harvick not running the Nationwide race at Talladega was not a problem. Again, no reason why. Finally, he talked in general terms about the Nationwide race and predicted the "big one" would happen and perhaps a young driver would win the race.

Why NASCAR Now continues to put Daugherty in this situation is any one's guess. Rather than let him prepare feature reports and use his owner experience to interact with the top personalities in the sport, he continues to be put on the spot for opinions that almost never turn-out to be accurate. This role damages his credibility when he appears on NASCAR Countdown and on the Monday "roundtable" shows. This season, Daugherty is the new Tim Cowlishaw.

Burr closed out the program by promoting a special one hour NASCAR Now show honoring Dale Earnhardt Sr. scheduled for next Tuesday. It was Dale Jarrett with a final comment who predicted it may well be Senior's son who is celebrating next week, and it may be with a Talladega win.

This program packed a lot of information and even some breaking news into thirty minutes. It was exactly the type of show that will make NASCAR fans think about tuning-in every Wednesday. Maybe Marty Smith should go on vacation more often.

The Daly Planet welcomes comments from readers. Simply click on the COMMENTS button below and follow the easy directions. The rules for posting are on the right side of the main page. Thanks again for stopping by.
Posted by Daly Planet Editor at 6:00 PM 19 comments: