Allen Bestwick led the NASCAR Countdown pre-race show and then called the race in Montreal with the hilarious Randy LaJoie alongside in the announce booth. On pit road, NASCAR Now reporter Marty Smith strapped-on the headphones and worked next to racing veterans Gary Gerould and Vince Welch. Clearly the "B team" for ESPN, this group was about to have a very interesting Busch Series TV experience.

The pre-race show set the table for what was to come in no uncertain terms. Three elements were about to collide with very dynamic results. First, there was a group of road course specialists normally seen as "ringers" in the NEXTEL Cup Series. With the Cup Series at Pocono, the "ringers" brought their "win or nothing" philosophy to Montreal with an eye on the record book.

Alongside the "ringers," there was a group of NEXTEL Cup drivers who made the one hour flight to Montreal simply to satisfy sponsor obligations. Usually the "big boys" in town, they suddenly found themselves staring at the "ringers" who were clearly not intimidated. One had the feeling things were about to get interesting.

Finally, the full-time Busch Series drivers were not very happy. Several of their colleagues had lost their rides this week to the "ringers." Several more of them had to suffer the indignity of practicing and even qualifying "their" cars until the "big boys" showed up on their private helicopters. Then, the Busch boys had to watch "their" cars run by the NEXTEL Cup "commuters."

Right off the bat, Bestwick asked LaJoie if the key to the race was starting up front. To his credit, LaJoie nailed the answer. He said the NEXTEL Cup veterans starting at the rear of the field had the knowledge and experience to deal with the different scenarios that a road course brings, and he believed they would be up-front and in the mix by the end of the race.

ESPN's pictures, scenery, and audio was outstanding, which is the "norm" that fans have come to expect with the Busch Series this season. With Bestwick "driving the bus" and directing traffic, the race began smoothly and then gained speed. As usual with ESPN, the only speed-bump in the road was the three minutes of Rock antique Aerosmith when the network played back the second worst music video in history. Yes, the answer to the question you are asking yourself is..."Flock of Seagulls."

The Montreal track is undersized for NASCAR vehicles, and even the Busch Series quickly found-out the event would be a matter of simple survival. Luckily, the pictures helped the viewers to deal with the single file "racing" and the long caution periods for several blown engines.

Unfortunately, ESPN chose a road course "ringer" to be their "in-race reporter." This would have been a good opportunity to use a NASCAR Busch Series regular, but the network wanted to guarantee itself the opportunity to talk with a contender. Scott Pruett is a nice guy, but he is hardly sparks the interest of NASCAR fans.

TV viewers saw immediately that slowly bumping a big Busch Series car in the hairpin turn and causing it to spin was the preferred method for passing in Montreal. Even smoking tires and Allen Bestwick's best announcing could not make-up for the fact that the race resembled taxi cabs driving on a golf course cart path.

The saving grace of this telecast was great Directing. The ESPN Director was always "ahead" of the action and showing cars "coming at" the viewer. The old ESPN TV production motto was "headlights and not tailpipes."

Simply put, being ahead of the action and constantly having the cars "coming at you" keeps the viewer "looking ahead" to the next corner. Think about this simple concept next time you watch a race. It really does make a difference.

LaJoie has been a blast for ESPN in his relief role. Many fans know his company makes most of the NASCAR custom-made racing seats, and it does not seem that he is too far removed from his driving days. He continues to be enthusiastic and positive in his comments for both NASCAR and the Busch Series. What a nice find for ESPN.

About halfway through the race, the bumping-and-grinding began as patience wore thin. There was no doubt things would get ugly, and they certainly did. Several "oil downs" caused lengthy delays, and NASCAR kept the cars going slowly under yellow. This just served to build the tension and frustration as the laps clicked away.

ESPN had a golden opportunity to create a good story with Busch Series regular Marcos Ambrose leading the event with just a handful of laps to go. Unfortunately, the network missed getting the crucial re-start with five laps to go on-camera because they were showing the crowd. Then, during the final big accident of the event, an in-car camera shot appeared that blocked the view of what was happening.

This was strange, because the directing had been so crisp to this point. Viewers then saw the fights begin at the front of the pack, as Robby Gordon, Marcos Ambrose, Kevin Harvick, and Scott Pruett engaged in a little "short track payback" racing which gave the event a black eye. ESPN had all the replays, but it was embarrassing to see the behavior of these drivers on national TV.

In the end, NASCAR eliminated their "bad boy" Robby Gordon and brought Kevin Harvick to the Winner's Circle. ESPN gets a lot of credit for delaying their transition to the X-Games until they interviewed Gordon, Harvick, and Ambrose. Bestwick made certain to say on-the-air they were going to interview all three.

In "TV land," you have to make soup from the ingredients that you are given. The Busch Series in Montreal overpowered a narrow track and wound-up in a "punting" festival that would have been great had this been the "A Main" at Islip Speedway.

ESPN did the best they could, and as a true team player they took it on the chin and stayed in the game. Racing these big cars at Montreal in the future is going to require changes to the track, or single file racing and the "chrome horn" approach to passing is going to continue to be the only game in town.

Kudos to ESPN for making something out of nothing, and for Allen Bestwick for showing us once again he deserves to get off pit road permanently.

The Daly Planet welcomes comments from readers. Simply click on the COMMENTS button below, or email editor@thedalyplanet.tv if you wish not to be published. Thanks again for taking the time to stop-by, and leave your opinion.
Posted by Daly Planet Editor at 7:37 PM 41 comments:

Tony Stewart vs. ESPN: Does He Have A Point? 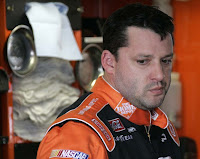 Apparently, the criticism of Tony Stewart by ESPN "talking heads" this week was a little more spread-out than originally thought. Lots of article links and emails pointed The Daly Planet in several different directions and to several different ESPN on-air announcers. What the network is up to this time is anyone's guess.

As ESPN begins to recognize once again that NASCAR exists, Tony Stewart has become the first to have to handle the "other shows" that ESPN produces and the fact that the ESPN News Network is "always" on-the-air.

The Daly Planet has been vocal about the fact that ESPN has chosen, in some cases, to use reporters who are not familiar with NASCAR to report on it. Many fans believe it is because the network still does not fully respect or even understand the sport.

One Daly Planet favorite this season is ESPN General Assignment Reporter David Amber. On-hand at NEXTEL Cup races before ESPN began its coverage, this sports TV veteran proved immediately to be novice at NASCAR. Fortunately, that did not matter as the NASCAR Now program he reported for was also hosted by two NASCAR "outsiders," Doug Banks and Erik Kuselias.

Between Amber, Banks, and Kuselias, the largest and most well-respected cable sports network in North America had absolutely zero credibility with fans or teams. Banks was unceremoniously fired, and never heard from again. Kuselias never even acknowledged his co-host's departure on-the-air. The network refused to comment.

Now, six months after this ESPN mess of "NASCAR illiterate" on-air talent began, Mr. Amber found himself face-to-face with Tony Stewart in a group of reporters at Pocono. Mr. Amber decided to ask Stewart a question, and then all hell broke loose.

"If every time we do an interview you want to stand here and dig-up dirt, you might as well go and find somebody else because we will wait until you leave." said Stewart. "Do we always have to leave with a dagger in our back from ESPN? That's all I'm curious about." Stewart continued to add some additional comments, without profanity.

This story was reported nationwide by the Associated Press, which means it has "legs" and will be making the rounds of news outlets. Stewart broke the "pack" of reporters tradition, and told Amber that he, and ESPN, were not welcome to continue to interview him. The question is, does he have a point?

The Daly Planet has been working hard this season to celebrate the racing coverage we have seen of the Craftsman Truck, Busch, and NEXTEL Cup Series. Along with that, however, comes a bevy of brand-new shows that are concerned with off-track issues. Remember, ESPN is a twenty-four hour a day monster that must be fed content endlessly...on each channel. Hence, the infamous "Who's Now."

From SportsCenter to Around The Horn, NASCAR now has to find a place in the content of all these shows. Prior to this season, NASCAR was clearly the Kryptonite of ESPN, and the network gave the entire sport the cold shoulder.

Does anyone remember Doug Banks asking Kasey Kahne if he would "stand by" his comment that David Stremme was fat? Anyone remember the hype of Montoya being "dangerous" and the other drivers being "deeply concerned?" How about the fact that Jeff Gordon and Jimmie Johnson were "feuding" after the Martinsville finish?

NASCAR is a square peg in ESPN's very round hole. On the track, good pictures and great sound. Hard-working announcers, and solid pit reporters. Away from the track so far this season...nightmare. Now, the network finds itself in a tussle with one of the sport's highest-profile stars. Can you believe it?

It might be time for ESPN to have a little meeting and try to decide how to rectify the "non-racing" issues that seem to be plaguing the network. Tony Stewart has a highly-rated Sirius Satellite Radio show each week, and this media platform gives him the guns to fire back at ESPN whenever he wants to a national audience.

Before you judge things on this simply "Tony being Tony," imagine if this was Jeff Burton, Jeff Gordon, or even Dale Junior who was truly upset. Remember, ESPN can decide at any time, on any show, on any network, to continue to perpetrate the belief that NASCAR drivers are just redneck drunks. Or, they can adapt a fresh new attitude and embrace the reality around them.

Maybe, a nice weekend retreat would help. Say aboard Jeff Gordon's one hundred and six foot eight million dollar yacht. That might change a few opinions.

The Daly Planet welcomes comments from readers. Simply click on the COMMENTS button below, or email editor@thedalyplanet.tv if you wish not to be published. Thanks again for stopping-by and leaving your opinion.
Posted by Daly Planet Editor at 12:38 AM 13 comments: