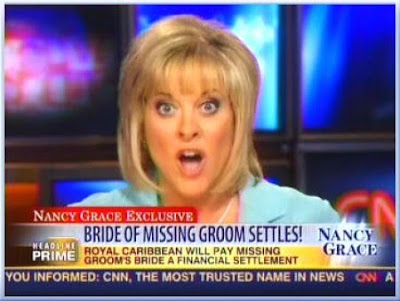 You know it's going to be an interesting media week when the news of Hurricane Irene damage is mixed with the announcement that Headline News anchor Nancy Grace will be on Dancing With The Stars.

Reports are that none of the East Coast racetracks involved in hosting major NASCAR events sustained any damage. Pretty rare moment in time to face both an earthquake and a Hurricane within days.

Speaking of earthquakes, Richmond International Raceway has the Wonderful Pistachios brand as the sponsor of its upcoming Sprint Cup Series race. The spokesperson for that brand is going to be the honorary starter and wave the green flag for the race.

Most of you are familiar with Nicole Polizzi by her nickname of Snooki. Yep, the controversial star of The Jersey Shore is going to mount the starter's stand and wave the green flag on 43 Sprint Cup Series cars. Click here if you are not of the current MTV generation and would like to meet the spokesperson.

Earlier this season, many fans enjoyed a TV special called The Day: Remembering Dale Earnhardt. SPEED aired this special produced by The NASCAR Media Group back in February. This Thursday at 8PM ET, another show in the same type of tribute style will air on the network.

The Day: 1992 Hooters 500 will be a special recalling the amazing group of stories surrounding that race in Atlanta. Richard Petty's final race, Jeff Gordon's debut and a championship that came down to the final laps made for a memorable day of racing.

Veteran crew chief Tony Gibson was heading up the rag-tag team for driver Alan Kulwicki. "We were the underdogs, we were the underbirds and we did it,” said Gibson. "We went out and beat these guys with multi-million dollar sponsorships. Here is this group of guys that pushed lawn mowers all day long and we go out and win this championship. It'll never be done like that again."

Some interesting NASCAR marketing news came down this week. Mike Myers wrote about a new initiative that involves 12 colleges. Click here for the full article at Q4G.

NASCAR has teamed up with University Directories on Campus (UDOC) said to be the leading media and marketing company on US college campuses. Their plan is “designed to engage college students by establishing unique NASCAR events on campus and at the track. With the assistance of two brand ambassadors per school, NASCAR will be integrated into the college lifestyle.”

"NASCAR and the social component of watching and attending races lends itself very nicely to the college lifestyle," said NASCAR Chief Marketing Officer Steve Phelps. "NASCAR U CREW will allow us to interact with college students across the country in a fun and relevant way, giving our current fans the avenue to express their passion and our future fans the vehicle to experience the sport."

It should be interesting to see how the NASCAR U CREW is received.

Saturday night in Bristol was tough to watch on TV due to the amount of commercials inserted during green flag laps. Jayksi reports the total broadcast time was 184 minutes. That total was comprised of 132 minutes of coverage mixed with 52 minutes of commercials.

ESPN will return the same broadcast team for this weekend in Atlanta. Marty Reid will call the Nationwide Series race while Allen Bestwick will handle the Cup race. This weekend both races are under the lights. ESPN2 Saturday night at 7PM for the Nationwide telecast and Sunday on ESPN at 6:30PM for the big boys.

When ESPN's Dale Jarrett was driving, he was deeply involved with UPS. Remember "The Big Brown Truck" ads and marketing campaign? Click here to see the most recent UPS move in sports. Former NASCAR executive George Pyne has snagged UPS and created a major college sports package for his company, IMG.

Keep an eye on UPS and the continuing commitment to NASCAR after the current contract expires with Roush Racing at the end of this season.

Finally, you may have noticed that NASCAR Now is again taking it on the chin this week. Rather than move the 5PM airing over to ESPNEWS, the early show is preempted for the early rounds of the US Open Tennis coverage. The solo airing for NASCAR Now is early morning East Coast time.

As we mentioned a short time ago, it's a double-whammy for the series. Starting in September, NASCAR Now will be pushed back to a 3PM timeslot while ESPN's own Sports Nation show will take over 5PM permanently. Tough demotion for a series in year five.

Happy to have your comments on any of these topics. Just click on the comments button below. 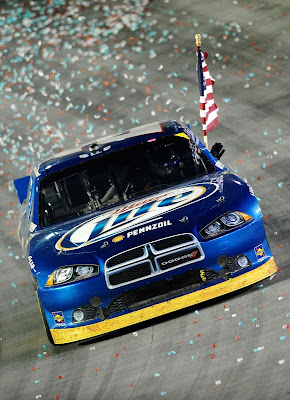 Hurricane Irene was coming up the East Coast while NFL preseason football games were being played around the country. The problem was that the hurricane coverage and the NFL games were both on ABC stations where NASCAR coverage was scheduled.

ESPN did a great job of showing the technology involved in cable TV and moving coverage in many areas from ABC to various ESPN cable networks. After some early issues, the complaints settled down as fans found the coverage. It really was a solid job of solving what could have been a big problem.

Once the telecast got underway, the pre-race trio appeared from a temporary infield location. It was much better than the Pit Studio that was parked outside the backstretch. Nicole Briscoe was with Rusty Wallace and Brad Daugherty.

Wallace again supplied the excitement and has the credentials, but Daugherty provided little. There has to be a way to get some kind of focus on a subject that will allow him to add something more than the tired hype he has offered for years.

ESPN's Sprint Cup Series TV team was ready for action. It turned out to be a tough night. From the start the race was about fuel mileage and track position. Brad Keselowski had found a loophole in the pit road speeding lines and was gaining positions on every caution flag stop. It would be an important story.

Allen Bestwick had very little to work with. ESPN's cameras jumped from one random battle of two or three cars to the next. By the time Bestwick explained what viewers were watching and let Dale Jarrett or Andy Petree make a comment, it was time for another commercial break.

On a short track like Bristol, with green flag laps around fifteen seconds, going to commercial break is deadly. This absolutely killed the telecast. There was simply no opportunity to develop any story lines. There was no time.

The producer tried to use the infield pit studio crew for recaps and even inserted Tim Brewer several times, but the racing action that was being missed was just too hard to recapture. TV viewers just missed too much to get back in the groove.

Pit road was loud and the reporters were limited to calling stops and shouting comments under green. Once again, some left-over time allowed for an extended post-race that ran the pit reporters around for lots of post-race interviews.

The stories that many of the drivers told in post-race were ones that often were never told on the race telecast. It's now a familiar refrain. The cycle of a short segment of live racing and then an extended TV commercial once again meant that the actual issues that happened within the race would be explained on the weekday review shows.

Our live chat revolved around the troubles ESPN had trying to figure out what to show in the content segments between commercials. Sometimes following the leader, sometimes focusing on one car and sometimes jumping around randomly just was not getting it done for us as veteran fans.

Let's open this style of coverage topic up a little bit and add it to our usual post-race comments. To add your opinion to our discussion, just click on the comments button below. Thanks for stopping by and sharing your NASCAR TV thought with us.