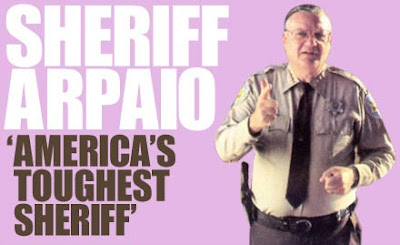 It's the PIR weekend, so we pick Sheriff Joe for our TV Police cover picture this week. This was the next to last race of the season and live on ESPN from start to finish.

Allen Bestwick anchored the coverage from the Infield Pit Studio. Bestwick tried over and over again to crank some excitement into the telecast, but that ended whenever Marty Reid took over.

The infield crew of Brad Daugherty, Rusty Wallace and Ray Evernham was chomping at the bit during the race, but was forced to sit back and watch several lengthy features during the pre-race show. Any momentum was broken as fans watched the videos.

Dale Jarrett and Andy Petree were in the booth as analysts, but it's up to Reid to provide the excitement and he simply did not deliver. As we heard from Jerry Punch in the same role, Reid began to sigh deeply about one hundred laps into the race and was totally out of gas until the end.

The script for ESPN this week was the three title contenders and they followed it. Time after time, teams appeared on camera racing for position or even being lapped and no explanation was offered of how they got in that position. Kasey Kahne was reported to have gained over twenty positions after one pit stop. It was Bestwick who suggested that perhaps Kahne has missed his pitstall. He was correct.

This is exactly the type of coverage that we talked about before the Chase began. Despite the dominant performance of Hamlin, there was racing and storylines unfolding throughout the field. They were not even visited, only tolerated.

The "Up to speed" recaps done by ESPN were listless and infrequent. The reports contained nothing more than recaps of points as they ran right now. ESPN simply had a formula and they followed it to the letter.

This was perhaps the least informative NASCAR telecast in the four-year history of ESPN. There are simply no words to try and relay just how much information was not passed along by the on-air team on the telecast. Fans of drivers and teams outside of the top three in points were hung out to dry.

If this is what NASCAR envisioned with the Chase, then so be it. They can deal with the consequences of fans whose teams were never even mentioned leaving to watch NFL football. As for ESPN, they will forever be connected with the phrase "if the race ended now" for the endless fake updates on points.

You watched this race. Tell us what you thought of the TV coverage from 12 voices on ESPN for four hours. To add your TV-related comment, just click on the comments button below. This is a family-friendly website, please keep that in mind when posting. Thanks for taking the time to stop by The Daly Planet. 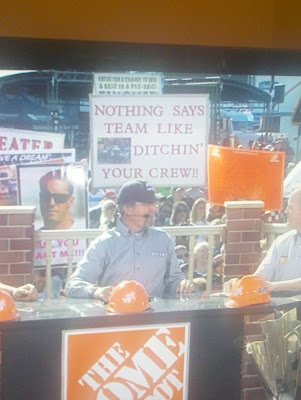 This is going to be the last real example of how ESPN chooses to present the Sprint Cup Series races in 2010. The final event in Homestead is always very strange. Lots of network executives are on hand, there are extra TV programs to do and the tone is very different.

This season, despite changes in personnel behind the scenes, ESPN has clung firmly to a philosophy that has been used since the network's Sprint Cup Series coverage began. The pre-race show offers "talking points" that the telecast then follows. Regardless of the actual racing, this pre-race script is followed throughout the live telecast.

The result has been a loss of viewers for several reasons. First, the focus on fewer and fewer drivers as the Chase progresses alienates fans of drivers no longer mentioned. Second, the lack of attention to the stories of non-Chasers who are in the top ten on the track. Finally, the inability of the director to open the cameras wide and show the actual racing for position instead of focusing on drivers selected in advance.

It's not the Chase, the COT or the racing. Those are elements that TV just has to deal with in any motorsports series. Those are the rules. The responsibility of the network covering the race is simply to step back and provide an accurate view of what is going on in the event for the fans watching on TV. It sounds relatively simple.

Allen Bestwick has been a rock for ESPN since 2007. First as a pit reporter, then as a Nationwide Series booth announcer and now as the anchor of the telecasts, Bestwick is often the voice of reason. This weekend, he has Ray Evernham, Rusty Wallace and Brad Daugherty alongside.

The Infield Pit Studio is rather unique. Used for both Nationwide and Sprint Cup Series races, Bestwick and crew are often limited to in-race recaps once the green flag falls. This season, ESPN has added a convoluted SportsCenter post-race show. This format stripped Bestwick of the NASCAR focus and inserted a usually ill-informed Bristol, CT announcer into the NASCAR telecast.

The end result is that many viewers switch to SPEED for the three hours of Sunday night programming that begins at 7PM ET every week. Had ESPN allowed Bestwick to anchor the coverage and throw to Bristol for some highlights of other sports, the results would have been much different.

Marty Reid sounds like a man who needs a break. Handling both the Nationwide and Sprint Cup Series races during this time of the season, Reid has been struggling to keep up with the information that needs to be passed along to TV viewers. Lucky Dogs, restart orders, pit road penalties and even on-track incidents have all been sometimes lost in space.

Reid has often been caught watching the TV monitors in the booth as opposed to the action on the track. Accidents are relayed by Dale Jarrett and Andy Petree, who are once again providing most of the credible content on the telecasts. This duo has quietly cemented themselves as the foundation of the ESPN coverage.

Keep an eye out today on how tight the director chooses to shoot the cameras. Criticism is mounting and ratings are plummeting as fans at home simply don't get to see what is actually happening on the track. As we often say, when the TV coverage does not even relate to what fans hear on the MRN radio coverage, there is a big problem.

Jimmie Johnson is loved by ESPN almost as much as Carl Edwards. Last year, JJ was the focus of the final telecasts and the fan reaction was brutal. ESPN is a network that likes "hyper coverage." That is a seemingly endless focus on only one item. That item last year was the #48 team.

Tim Brewer has become almost a cult figure. Popping-up in the telecast to relate fundamental issues about tires, shocks and even fueling, Brewer's presence is often forced into the telecasts quickly after an incident. This makes Brewer's explanations of what he thinks happened often proven incorrect later when a pit reporter interviews the drivers. Talk about a no win situation.

At the end of this season, ESPN will once again evaluate the entire on-air line-up. Personalities like Ricky Craven and Ray Evernham deserve bigger roles. Meanwhile, those struggling like Reid and Daugherty may find themselves looking over their shoulders.

All of this means that this PIR event is big for many reasons. Like the race teams, a good performance today may mean an extended TV contract for some and a bad performance may mean a change for next season. It's going to be very interesting to watch.

This post will serve to host your comments about the ESPN coverage of the Sprint Cup Series race from Phoenix International Raceway. To add your TV-related comment, just click on the comments button below. This is a family-friendly website, please keep that in mind when posting. Thanks for taking the time to stop by.