Fans In A Lurch With No NASCAR TV News 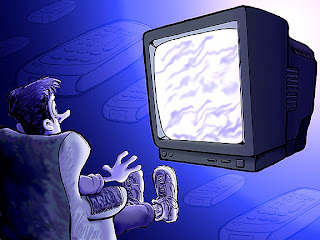 Last December, TDP talked about the role of the various NASCAR-related Internet websites when it came to keeping fans up to date during the off-season.

This December, with the issues confronting the sport and the nation, this high-tech supply-line of information has become vital to communicating the top NASCAR stories as the sport struggles to survive the troubling economy.

The real problem for fans is that NASCAR news coverage on TV comes to a grinding halt after the last wheel is turned at Homestead. Despite the coverage of the three national touring series banquets, the NASCAR TV partners are long gone as Christmas approaches.

A quick search of ESPN and SPEED reveals just how barren the landscape has become. There is no NASCAR-related TV programming scheduled and the 2009 schedules are not yet formulated because of the changes in the testing rules.

Last year, fans enjoyed several weeks of SPEED offering a January testing recap show that featured interviews and testing footage. This season, with no testing allowed, the first cars on the track at Daytona will be in February as Speedweek starts for the Daytona 500 build-up.

Both during this off-season and the last, there has been a constant stream of news and information coming out of the sport in general. Unfortunately, ESPN has packed up NASCAR Now and does not even offer a once-a-week thirty minute show. SPEED has no regular NASCAR news show and puts everything from the SPEED Report to Wind Tunnel on hiatus for the winter.

It certainly would be nice to see reporters like Marty Smith and Wendy Venturini talk about the news from Mooresville, NC. Even nicer would be personalities like Ed Hinton, Darrell Waltrip and Dale Jarrett talking about the wild changes in the sport right now and what it will mean for the future.

While the Sirius NASCAR Channel does a great job of involving the fans and hosting various NASCAR personalities, there is something very different involved in seeing a panel of experts rather than just hearing them.

No matter how much print and Internet content is created, there is a notable absence of personalities from ESPN, SPEED and Fox on TV during this time of the year. The only way to combat this in the future is to allow a news-oriented NASCAR TV series to continue through the off-season. Lack of racing on the track certainly does not equal a lack of NASCAR news being generated by the industry.

Click here to see the 2009 "silly season" team chart from Jayski that will at least give fans a thumbnail view of what the Sprint Cup Series will be putting on the track next season. This is exactly the type of information that should have a place on TV right now.

Perhaps, with the Grand-Am Series testing and racing in Daytona on SPEED in January, that network might revitalize a weekly show like The SPEED Report. Right now, the TV listings for SPEED in January have not yet been made public.

Over at ESPN, NASCAR is non-existent on that family of TV networks. This is the stick-and-ball time of the season and racing is nothing until Daytona in February.

ESPN.com has done a very good job of keeping on top of the NASCAR stories with a combination of writers, but none of them have turned their stories into video segments or aired them on shows like SportsCenter or even ESPNEWS.

This is only the second off-season of the new TV contract. It might be time for both SPEED and ESPN to take a long hard look at how NASCAR fans are being left out in the cold where news, information and discussion of important topics on television are concerned.

The Daly Planet welcomes comments from readers. Just click on the COMMENTS button below and follow the easy instructions. The rules for posting are located on the right side of the main page. Thank you for taking the time to stop by.
Posted by Daly Planet Editor at 6:15 AM 30 comments: