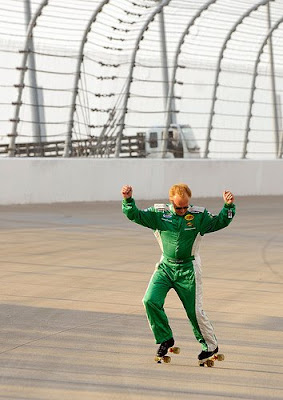 Well, this year's trip was apparently quite a success. Thanks to our friends at BP Sports, here is an article about this season's effort:

At the age of 67, Morgan Shepherd’s best racing days are behind him, but don’t let that fool you. In April, with a grossly underfunded team, he was able to finish on the lead lap at Talladega in the NASCAR Nationwide Series, finishing in 13th place and prompting praise from his competitors.

But the man who made his Sprint Cup debut some 39 years ago — accumulating four wins and 168 top 10s in that series and 15 wins and 67 top 10s in the Nationwide Series — isn’t racing for praise or even respect. All you have to do is take one look at his green No. 89 Dodge Charger to see the reason he is racing.

Plastered on the back fender is a large decal that reads, “Racing for Souls.” And on the hood, the decal reads, “Racing with Jesus.” If that isn’t clear enough, his ministry is called “Victory in Jesus Racing Ministries.”

For the past 22 years God has been using Shepherd as he takes a team — including many NASCAR drivers — into the mountains of Virginia during the Christmas season to help those who are most in need. It was an idea that was born one day when Shepherd was talking to his good friend Ken Lanter.

“We were talking about something we could do for someone at Christmas,” said Shepherd, a member of Gateway Baptist Church in Newton, N.C. “And Ken said, ‘Morgan, I know the perfect person. I was up at the fiddler’s convention in Galax, Va., and I was talking with this gentleman. He was all humped over. He was probably not more than 4 feet tall because he was all bent over.’”

The man’s name was Billy Shough. Ken asked the man what he would do if he ever received $1,000 and Billy said he’d never had the kind of money, so he didn’t know, but he said he would probably fix his roof and paint his house trailer.

Shepherd made it happen, and it was just the beginning.

His team heard about a woman who was suffering with polio. They found her. She was living in what Shepherd referred to as a “little cracker box house.” They built her an 1,800-square-foot modular home and completely furnished it. Then they took care of her until she passed away a couple of years ago.

On and on the stories go.

“I found out in life that if you pay attention, God will give you a direction,” Shepherd said.

Shepherd’s caravan travels from one city to the next during its annual trip, handing out gift bags with food, T-shirts, racing memorabilia and other things to more than a thousand low income and needy people. He works with a church in the area to pinpoint those who are most in need.

As Shepherd and his people pass out the bags, Shepherd tells them the true meaning of Christmas — about the one true shepherd who came to earth and then died for their sins so they could have eternal life.

On Dec. 15, the caravan traveled to Stuart, Va. While Shepherd was there, he donated $30,000 to an organization that helps provide educational opportunities for the mentally and physically challenged.

They stopped in Galax, Va., after their stop in Stuart, and donated another $5,000 to needy citizens through the Catawba County Sheriff’s Department near Galax. 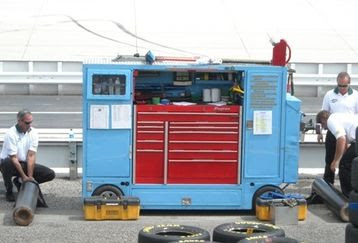 This trip is even more interesting when put into a racing perspective. Here is Mary Jo Buchanan from The Bleacher Report:

Pit boxes are a staple in the NASCAR world. Every team has their own version of their "war wagon", assembled each and every race weekend.

Pit boxes serve as critical places to sit for the crew chief, as well as other important race team members, including parents, spouses, and significant others. They also serve as the center of the pit crew's universe, showing replays on television monitors, displaying scoring and lap times, and sometimes even providing that welcome bit of shade during a sunny race day.

Some pit boxes are incredibly elaborate, with multiple television screens, including race broadcasts, as well as satellite feed. Many also include video cameras, VCRs, DVRs, computers and a warm up hub with lug nuts for the tire changers to practice before each pit stop.

At the fall race at Dover, I became fascinated by the parade of the many pit boxes. Having the great opportunity to watch them being set up before the Sprint Cup race on Sunday, I saw pit boxes of all different shapes, sizes and complexities.

Some of the pit boxes took hours to set up, with multiple satellite dishes and lots of technology. Others were much more simplistic, boasting the bare minimum of "bells and whistles".

We happened to set up our spot for the race right behind the pit box for Morgan Shepherd. In fact, his pit box is pictured in the photo that accompanies this article.

Shepherd's team was obviously not one of the most well-funded endeavors. In fact, his race team runs on faith and is appropriately named Faith Motorsports. Shepherd’s pit box actually sports the "Ten Commandments" as one of its focal features.

Rather than having seats on top of the pit box under a canopy for shade, Morgan Shepherd's wife and team owner Cindy, perched herself instead sitting cross-legged on the box, keeping lap times and other scoring information in her trusty notebook.

There were no television monitors, no computers, and most certainly no bells or whistles on their Faith Motorsports war wagon. There was only a rag-tag pit crew that serviced the car the entire race.

Although Shepherd finished two laps down, he did indeed finish the entire race, something not all that common for this race team. It also fascinated me to see the media, including the television reporters, throughout the race constantly stopping by, asking Cindy questions and for race information.

Morgan Shepherd's pit box was by far the smallest and least technologically savvy on pit road. In spite of that, his team showed such determination and grit the entire race. They truly did put their faith into action in spite of their teeniest of all pit boxes and team equipment.

I had not thought about that pit box or that race until this past week when I heard that Morgan Shepherd had announced his Charitable Fund had yet again donated over $30,000 to the PARC Workshop in Stuart, Virginia. This was Shepherd's 22nd year of visiting the handicapped individuals who rely on the Workshop for employment and socialization.

Shepherd said that this visit was the highlight of his race year. He loves to go each and every year, sharing whatever money and gifts he can find, just to hear those enthusiastic youth and adults shout, "Morgan, Morgan is here".

And that's when it truly hit me. It’s not the size of any racer's pit box that matters. Instead, it is the size of his heart that truly makes a difference, especially during this holiday season.

So, thank you Morgan Shepherd. It was a treat to sit right behind your smallest of pit boxes, watching your race team in action that sunny day in Dover. The size of your heart and the commitment that your team showed that day, and the faith that you all continue to demonstrate through your charitable work each year, really is the measure of your true success.

I don't know about you, but those stories certainly seem like a nice way to celebrate Chistmas and re-align our priorities as we head into 2009. You can read more about Shepherd at the MorganShepherd.com website. 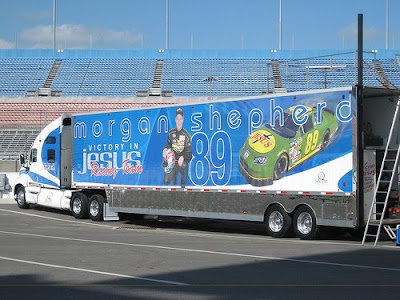 The Daly Planet welcomes comments from readers. Just click on the COMMENTS button below and follow the easy instructions. The rules for posting are located on the right side of the main page. Thanks for taking the time to stop by.
Posted by Daly Planet Editor at 9:00 AM 10 comments: