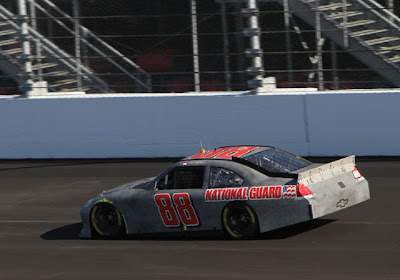 This week we expect an interim president to be named for SPEED. Hunter Nickell will be leaving as the network chief next week. No matter who takes on the task, this transition is going to be tough because Daytona is right around the corner.

It will be Thursday, January 12 when NASCAR coverage returns to SPEED. Testing at Daytona will once again be mixed with a fan fest and details about that can be seen at the Daytona International Speedway website.

Thursday, Friday and Saturday SPEED will cover the afternoon sessions beginning at 1PM ET and running until 5PM. There is also a morning session that begins at 9AM if you might be attending in person.

For those of you familiar with Daytona testing, the story this year is going to be very different. NASCAR is working very hard to break-up the two-car tandem drafting at this track with rules changes of all kinds. From radiators to radios, it's become very clear that NASCAR wants the "lovebug racing" to vanish.

That makes this year's coverage on SPEED important. Twitter and Facebook can send pictures and reactions to the testing, but only SPEED can offer HD video from a TV network perspective. Fans want to know what is going on with this series.

As everyone knows these days, social media has made the timeline of activities like testing run in almost real time. Team reps, drivers, the speedway and the sponsors will all be passing along information as it happens as the teams get ready for another ten month grind.

There are several items to discuss with SPEED's planned coverage. It will be interesting to see if the on-site TV reporters in the garage are tweeting information and posting to SPEED's Facebook page while the announcers in the booth talk about what is happening on the track. This practice might become the norm next season.

Secondly, SPEED will not restart the RaceHub program on January 12 with the testing coverage. The current network schedule puts a re-air of testing running from 6 to 8PM and then nothing NASCAR related in primetime.

So, instead of talking about some of the biggest changes in the sport as NASCAR tries to redefine this type of restrictor plate racing, SPEED viewers will be seeing Pimp My Ride, the now famous tow-truck show Wrecked and American Trucker to wrap-up primetime.

On Saturday, the schedule has the testing re-air at 7:30PM but no other NASCAR programming of any kind that night. This is the final day of this test session.

It seems that SPEED is trapped between a rock and a hard place these days where NASCAR is concerned. The network programming is trying to serve several masters with different agendas and failing miserably at all of them.

As we mentioned in an earlier post the network's head of programming and production, Patti Wheeler, also chose to leave SPEED at the end of the 2011 NASCAR season. It's been a rough couple of months for the Charlotte, NC based company.

The current posted programming schedule for the network only goes through January 15. In a world where schedules are often six months ahead, this puts SPEED in a position of having four weeks of mostly older re-run programs out for the public to see. RaceHub is not on the list.

Update Monday 10AM: SPEED passes along that live online streaming of the 9AM test sessions each day can be seen at the SPEEDtv.com website. Nice addition.

We will update the specific information in terms of announcers, format and additional online information like timing and scoring after the Christmas break. Take a deep breath this week, because it all will be starting again before you know it.