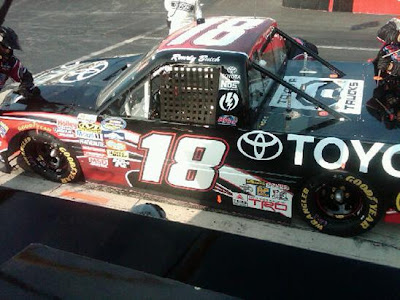 Well, this certainly is not a live blog as the CWTS race from Dover is playing back at 8PM on SPEED. The race ran live at 5PM ET. Normally, the third featured race at a track would be run at night on Friday, but Dover has no lights. Instead, the race is held for TV viewers until later in the evening.

SPEED's CWTS crew is on hand for this event. Rick Allen, Phil Parsons and Michael Waltrip are in the TV booth. Ray Dunlap and Adam Alexander are on pit road. Krista Voda handles the pre-race show.

Trucks at Dover are fun to watch. This series works well on this track and it's nice for the Dover weekend to have three feature races. The flipside is the obvious. No lights make NASCAR run the CWTS race on Friday afternoon and show it on TV later that night. Times have changed and tape-delaying live professional sports is not really the thing to do.

The SPEED presentation of the trucks on TV is well known. No bells and whistles, just cameras following the action and announcers trying to tell the entire story. This scenario has worked quite well for the network and the fans for years.

Let's use this post to host your comments about the CWTS on SPEED tonight. To add your opinion, just click on the comments button below. Thanks for taking the time to stop by The Daly Planet.
Posted by Daly Planet Editor at 7:13 PM 15 comments: 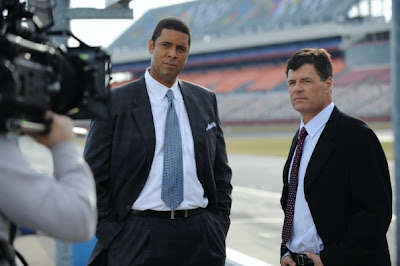 What an interesting day we are going to have Friday from the Monster Mile. There are breaking news stories, weather issues, and TV personality comments. On the track two series are qualifying, three are practicing and one is racing.

Brian Vickers was a story on both NASCAR TV shows Thursday. Vickers is out and Casey Mears in in the Red Bull #83 Sprint Cup Series car this weekend. It was disclosed that Vickers began to feel ill in Washington, DC during the week and has been hospitalized. The Red Bull team will update the Vickers situation on Friday morning. Look for this information on NASCAR Live that airs on SPEED at 9:30AM ET.

Update 10:30AM ET: Here is the link to the Brant James story on Brian Vickers and his health issues. Click here for the story.

Weather is again going to play a role in a NASCAR weekend. While the high on Friday will be in the lower 80's, there is a 40% chance of thunderstorms during the afternoon hours. Currently, Sprint Cup Series qualifying on SPEED is at 3PM and the truck race will be run at 5PM. As most fans know, NASCAR and SPEED delay showing that race until 8PM ET.

Showtime sends us clips of the Inside NASCAR TV series each week. Thursday, they sent along a clip of Michael Waltrip, Brad Daugherty and Chris Myers. Daugherty and Myers quickly became props as Waltrip stole the show with his words. In one segment, he addressed the next inductees into the NASCAR Hall of Fame and shared his answer on whether or not Dale Earnhardt Jr. would win a race this season.

Click here to view the Inside NASCAR segment. Thanks again to our friends at Showtime.

Fans have also been asking for the official race information forwarded from the tracks to the media. Here is some from Dover for the truck race:

Again, the Dover racetrack does not have lights. The truck race is run at 5PM and carried live on the radio and Sirius 128. Unfortunately, the powers that be made the decision to hold the race for TV and tape delay it until 8PM ET. That allows for the biggest possible audience, but perhaps those fans who are not at work would like to see the race live. It's an issue that gets visited every season. So far, without any change.

One final note. Our friends at FOX and SPEED have been kind enough to respond to your requests to be informed of the post-race plans on Sunday after the Sprint Cup Series race. The NASCAR on FOX crew will be switching to SPEED after the event for a live extended post-race show. That should be around 5PM ET. This does not take the place of Victory Lane on SPEED. That show will air at 8PM as scheduled. Thanks to those two TV networks for the heads-up.

We will use this post to host your comments on the topics above and also the daytime TV coverage from Dover on both SPEED and ESPN2. The complete TV schedule for the weekend is on the right side of this page. To add your comment, just click on the comment button below.

This is a family-friendly website, please keep that in mind when posting. Thank you for taking the time to stop by The Daly Planet.
Posted by Daly Planet Editor at 6:00 AM 26 comments: