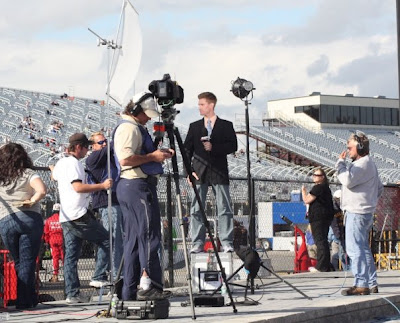 Note: Keeping this post up for Thursday as details continue to come in. Was Marty Smith right or wrong in his first report? Did you see Kyle Petty or hear the Kasay Kahne phone call on SPEED's Race Hub? What do you think of the TV coverage of this entire story?

Few things right now can beat the speed of Twitter and the flexibility of cable TV news. Every day, Twitter carries news stories as they are breaking live. At the same time, the mainstream cable TV news networks use live pictures to tell stories from all over the world.

In NASCAR's little slice of the sports pie, both of those tools have once again come into play. It was ESPN's Marty Smith who broke the news on Tuesday that Kasey Kahne had signed a deal to drive for Hendrick Motorsports beginning in 2011.

Smith launched his scoop on Twitter with a link to the full story at the ESPN.com website. Shortly after that, ESPNEWS began to include the information in their breaking news crawl. Ultimately, Smith appeared on ESPN2's NASCAR Now Tuesday program to offer updates on the story in person.

Once Smith broke the news, Twitter users began to repeat the story and spread it to other users. This included reporters and bloggers who did not credit Smith, but used his information as their own almost instantly. Exclusivity on Twitter can often times be measured in seconds.

ESPN put together a dynamic Tuesday NASCAR Now program. It's quite clear that ESPN scrambled to put a lot of resources behind this story. Reporter David Newton and analyst Ricky Craven appeared on the show. Newton updated several stories, including how Kahne's current Cup owner feels about the star of the team leaving for greener pastures.

SPEED offered Race Hub on Tuesday, where co-host Steve Byrnes said SPEED had confirmed that Kahne was leaving. He never mentioned if they confirmed it via Smith's ESPN story. Race Hub made this a non-story, using Darrell Waltrip on the phone as the only interview in reference to this topic. Waltrip was not a good choice. The series has Kyle Petty to address this issue on Wednesday night at 7:30PM.

Late this morning, ESPN advised that they had no landed an interview with Kahne and Marty Smith would conduct it. The results would be seen on NASCAR Now at 6PM. It should be interesting to see if SPEED references this or if Petty's interview was recorded earlier in the day.

Ever since the story first broke, Twitter has been filled with a mix of reporters, bloggers and fans repeating the same information almost endlessly. It seems that with every upside to technology and information sharing there is also a downside.

We are going to open this post and get your comments while we continue to update any other media developments on this story. Click the comments button below to add your opinion of how this story is being covered on TV and online.

Thanks for taking the time to stop by The Daly Planet.
Posted by Daly Planet Editor at 12:00 PM 49 comments: