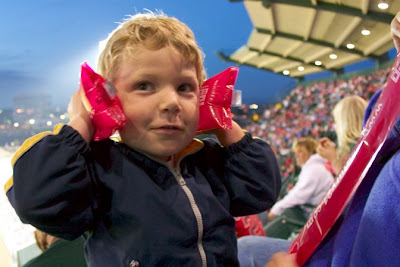 The short laps of Bristol Raceway force the TV crew to strip-away all the bells and whistles and focus on the racing action. The Nationwide Series poised just that challenge to the NASCAR on ESPN gang Friday night.

The network decided to keep the "bottom line" graphic insert on the screen during the entire race. Then, it added SportsCenter "right now" updates during green flag racing. Even with laps of under twenty seconds, ESPN added pre-recorded "bumpers" leading into the commercials that featured the drivers standing and staring into the camera.

From the start of the race, the commercial rotation was crushing and often resulted in only small "snapshots" of racing or simply recaps of missed action before another commercial. Also under green, Tim Brewer in the Tech Center provided updates without the racing action in a second video box.

By now, you may have caught-on that ESPN changed nothing for this race. In fact, features and pre-determined storylines caused this broadcast to become almost a highlight show. The racing action had to fight against the ESPN agenda. The racing action lost the fight.

Early in the event, the graphic information showed four cars had fallen out of the race. There had been no caution periods. These teams had never been mentioned on the telecast when they were running. They were never mentioned when they retired. Since they were not star drivers or star teams, they simply did not exist to ESPN.

Ten ESPN announcers surrounded the action at Bristol with four pit reporters, three on-air talent in the infield and three more upstairs in the announce booth. Ten voices trying to talk while sixteen second laps and great racing flew-by resulted in nothing more than a complete mess.

Just like last season, ESPN suddenly decided that the Nationwide Series Championship fight was going to "trump" the actual race and the network followed that agenda to the end. The focus on the potential champions left the reality of those cars running outside of the top five to become nothing more than something to be tracked as the graphic crawl went slowly by at the top of the screen.

Commercial-after-commercial ran as ESPN found themselves constantly in commercial break during incidents on the track but never returned early. Nothing was worse than the timing of the TV commercials in this race. Veteran fans may remember that this was the same problem ESPN experienced at this track last season.

With 25 laps to go, viewers had not seen any racing outside of the top ten or had a full-field recap. It was going to be the Clint Bowyer show to the bitter end until the unthinkable occurred.

The car ESPN had focused on all race long was about to be passed for the lead of the race and ESPN missed it. Not because the network was in commercial, but just because they missed it. The winning pass had to be replayed.

Some late attempts at showing other racing momentarily added nothing and made no sense. By now, Jerry Punch was just talking about what was appearing on his TV screen and any hope for a perspective on the race itself was gone.

The new pavement at Bristol allows for two-wide racing and the races take less time because of fewer cautions. With only two laps to go at 9:45PM Eastern Time, Punch had not called any significant racing action. This ended in one of the most amazing moments in recent NASCAR history.

As Keselowski made his final lap and won the race, Punch called no other cars coming across the finish line. Suddenly, silence ruled. Let's repeat that one item. The ESPN play-by-play announcer called only the winner crossing the line and did not mention one other car or team as the rest of the field screamed around on the final lap.

Cars were crashing and the normal last lap chaos of Bristol was in full-swing. What NASCAR fans nationwide heard was silence until Dale Jarrett and Andy Petree jumped-in once again and tried to help. ESPN actually had to replay the finish so TV viewers understood what had happened on the final lap.

The blunt reality of the short laps at Bristol mandate that TV networks change to cover this event like no other. ESPN was unable to deviate from the three pre-planned agendas of featuring JGR, the Nationwide Championship fight and the top two or three cars on the track. That resulted in a loss of any information on the vast majority of the drivers in the field for the entire evening.

As the network filled the remaining program time with interviews, fans learned who finished where and what really happened in the race. They got this information from the drivers. Punch and company were long-gone and it was Bestwick who led the way through the post-race interviews.

Many of the drivers interviewed had not been seen on-camera during the race itself. The stories were almost all new to those who watched the ESPN coverage. The reality of ESPN's race production problems was being exposed by the drivers themselves.

Perhaps, the opinions of the fans who will be posting their comments on the television coverage of the Friday Nationwide Series race might help to put things in even better perspective for both NASCAR and the ESPN production team prior to the Saturday night coverage of the Sprint Cup Series race.

The Daly Planet welcomes comments from readers. Simply click on the COMMENTS button below and follow the easy instructions. The rules for posting are located on the right side of the main page. Thank you for taking the time to stop by.
Posted by Daly Planet Editor at 8:57 PM 55 comments:

The night race at Bristol is always great for TV. There are several reasons why. The time of the race makes for great pictures and the action on the track makes for great racing.

Allen Bestwick is up first with NASCAR Countdown at 7:30PM. He will be joined by Rusty Wallace and Brad Daugherty in the Infield Pit Center for this program.

The race coverage is up next with all the ESPN regulars. Dr. Jerry Punch will call the play-by-play with Lead Analyst Dale Jarrett and veteran crew chief Andy Petree alongside. Reporting from pit road will be Shannon Spake, Jamie Little, Dave Burns and Mike Massaro.

This racetrack has been a tough assignment for ESPN because the fast pace of the race does not fit-in with the network's tendency to rely on planned audio clips and features during the coverage. It is also tough to arrange the triple-splits on the pit stops and to try and squeeze-in replays during green flag racing.

It should be a challenging night for the crew with a lot of noise in the infield affecting the pit reporters and tempers getting a little tight as the race progresses.

This post will host your in-progress comments about ESPN's coverage of the Nationwide Series on Friday night. To add your TV-related comments, just click on the COMMENTS button below and follow the easy directions. The rules for posting are located on the right side of the main page. Thank you for taking the time to stop-by.
Posted by Daly Planet Editor at 5:00 PM 254 comments: 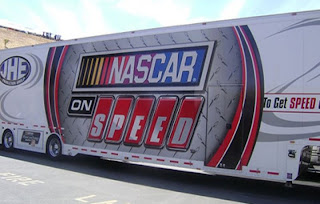 The entire SPEED gang will be on-site in Bristol, TN as the network steps-up to the plate for an all-day NASCAR TV marathon. Only two days after televising an exciting Craftsman Truck Series race, SPEED will handle all the on-track NASCAR action on Friday leading-up to the Nationwide Series event.

It will be veteran host John Roberts who lights-up the SPEED Stage at 10AM Eastern Time with an edition of NASCAR Live. Reporting for Roberts from the garage area will be Randy Pemberton and Hermie Sadler. Pemberton has been hosting NASCAR in a Hurry for SPEED and along with Sadler has been handling driver channel duties for DirecTV's Hot Pass.

The action on the track begins at 10:30AM with Nationwide Series practice. The hard-working trio of Steve Byrnes, Jeff Hammond and Larry McReynolds will call the action on the track from upstairs in the announce booth. Reporting for this session from the garage will be Wendy Venturini and Bob Dillner. With all the happenings of the past week, it may be this series where the news is really being made.

Up next at Noon will be Sprint Cup practice. The same entire TV crew, including announcers, will continue for this session. Since many of the drivers will be doing double-duty, somehow it makes sense for the TV crew to do the same. This is a ninety minute practice session that has been known to result in some incidents and some hot tempers.

After a quick lunch, Byrnes, Hammond and McReynolds will put on their Trackside hats and be joined by Elliot Sadler for that program at 2:30PM. This one hour show from the SPEED Stage usually features two guests but with the schedule at Bristol there should be a wide variety of people stopping-by and a diverse group of topics being discussed.

At 3:30PM, the qualifying begins for the Sprint Cup Series and guess who will be handling the action for SPEED? That's right, the same crew from the earlier practice sessions will return including Venturini and Dillner for qualifying. One note is that TV favorite Kenny Schrader has replaced young Brad Coleman in the #96 car for this weekend and Schrader is a pretty crafty veteran at getting around Bristol.

Rather than take a break, NASCAR will roll-out the Nationwide Series cars as the Sprint Cup session is in-progress and crank-up Nationwide qualifying when the "big boys" are done. Once again, the same TV crew will handle the entire session. This should result in some frantic driver-hopping as several Cup drivers are running both races. This Nationwide session should begin around 5PM.

The final order of business for SPEED on this busy Friday is the Happy Hour for the Cup Series. With all of the previous sessions running back-to-back, SPEED has set aside ninety minutes to cover this session whenever it starts. The coverage will begin at 6PM and end a very long day for the same team of announcers in the booth and downstairs in the garage. John Roberts and the NASCAR Live gang will fill any time as needed during the day between on-track sessions.

Friday is going to be another challenging day for all the TV folks from the technical crew to the production folks and all of the engineering gang. SPEED did a great job last week with the same challenge. Bristol should offer another opportunity for NASCAR fans to stay with one channel all day-long for everything leading-up to the Nationwide Series race at 7:30PM over on ESPN.

This post will serve to host your TV-related comments about SPEED's all-day coverage of the Friday activities from Bristol, TN. To add your opinion, just click on the COMMENTS button below and follow the easy instructions. The rules for posting are located on the right side of the main page.

Thank you for taking time out of your day to stop by The Daly Planet.
Posted by Daly Planet Editor at 10:00 AM 36 comments: