NASCAR Wives: What Could Have Been 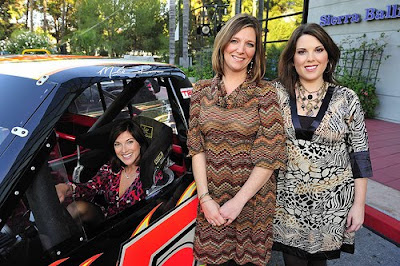 SPEED sent along a note last week saying that DeLana Harvick was going to be a guest on the Thursday edition of the Race Hub show. The note got me to thinking about what could have been.

It was January of 2009 when the TLC network announced it had reached an agreement for a new show that was going to be produced by the NASCAR Media Group (NMG). In a style called "docu-soap," four women deeply involved in NASCAR would be the subjects of a new series.

In addition to Harvick, the others in the show were to be Angie Skinner, Shana Mayfield and Kelley Earnhardt. Harvick was listed as one of the Executive Producers, meaning that she would actively participate in coordinating what type of content would be included. That is one of the TLC promotional pictures shown above.

Click here for a story from Sport Business Journal reporter Michael Smith. He details the controversial end of the NASCAR Wives project before an episode even aired and explains the reason behind the cancellation. Simply put, the network wanted to create fake conflict and storylines.

Here are some excerpts from the article:

"The network wanted situations created that were not true to how these women normally act," said NMG chief Jay Abraham. "They wanted conflict, and we just weren’t willing to go down that road.”

"We just had to go our separate ways,” Abraham said. “We were never able to agree on the creative approach for the project. We simply were not going to do anything to undermine the credibility and the relationships we have with our drivers. We were being asked to do things more in line with traditional reality programming and it wasn’t true to the nature and personality of our sport and the women involved."

Essentially, the TLC executives were not content to offer a realistic snapshot of the lives of these four very diverse women. Instead, the insane name calling and cat fighting that attracts viewers to the "Real Housewives Of Anywhere" franchise was requested.

This year, the NASCAR TV programming landscape is the bleakest it has been since 2007. There are no original programming series, no new "reality" shows of any kind and no behind-the-scenes shows that have won NMG award after award. In fact, the Executive Producer at NMG was fired last year and has not been replaced.

Last week, Showtime put the Inside NASCAR TV series on hiatus until September. ESPN's NASCAR Now is drowning in a 3PM weekday timeslot with no re-air. SPEED's Race Hub was pushed from 7 to 6PM and is no match for TV news programming on the East Coast.

Amid this environment, just imagine where the NASCAR Wives franchise could be right now if TLC had just taken the original idea presented by Abraham back in 2009 and run with it. The real lives of these four women have taken incredible turns without one moment of fake drama.

The sudden closing of Kevin Harvick Inc. was surprising, but perhaps less surprising then having Harvick subsequently announce DeLana's pregnancy during the pre-season NASCAR Media Tour. You want drama, the Harvick family can flat-out deliver it. Their world is about to change forever.

Skinner moved to a high-profile NASCAR radio job while her husband continues to slowly wind-down a long driving career. Partnered with Dave Moody and heard nationally five days a week, Angie's star is on the rise while Mike seeks to define his life after racing.

Earnhardt's partnership with Go Daddy and Danica Patrick breathed life into JR Motorsports even as Kelley's personal life continued to change with a new husband. A new husband who is also a racer. The Danica factor can never be discounted where TV is concerned, but the Kelly Earnhardt story is a good one.

Finally, the saga of the Mayfields could have led to a spin-off series that few would have believed. From a single failed drug test through direct confrontation with NASCAR and now to multiple arrests for possessing stolen property, this one has it all. At the center is Shana, now a Twitter star, standing behind her man and rallying her troops against what she perceives is a personal vendetta by NASCAR's own chairman.

Somewhere at TLC there has to be an executive kicking him or herself for letting this one slip away. As Abraham said, NASCAR Wives would not need fake drama or invented storylines to keep things interesting. As most NASCAR fans know, the ladies behind the drivers can do that quite well on their own.

"Still No Greenlights For NASCAR" was a TDP article from October of 2011 talking about the current NASCAR TV season and in what kind of shows networks chose to invest. Click on the title to read the article.