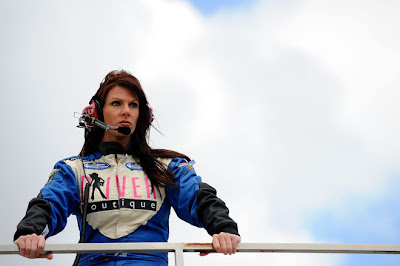 Jennifer Jo Cobb has a new ride for the weekend and a chance to continue to keep her name in the media if she comes through with a solid performance. It's been a wild week for Cobb that included walking away from her former car on the starting grid, appearing on tons of TV and radio show and now jumping into the Rick Ware Racing ride and running the entire race. TV will be keeping an eye on this issue.

Some new faces in new places this weekend for ESPN. Allen Bestwick steps into the broadcast booth as Marty Reid is over in St. Pete working the IndyCars for ABC. Dale Jarrett is off this weekend, so Rusty Wallace will once again fill-in as the Lead Analyst. Andy Petree will be the third man in the booth.

Down in the Infield Pit Studio, it will be Nicole Briscoe and Brad Daugherty. Rusty may or may not be joining that group for the pre-race show at 5PM ET. It might depend on the weather. Friday was rainy and the track had water leaks, called "weepers," coming up in several places. Hopefully, that same situation will not present itself on Saturday.

Dr. Jerry Punch, Dave Burns, Mike Massaro and Shannon Spake will be the pit reporters. Tim Brewer and the Tech Garage rolled all the way to California. Jamie Little and Vince Welch moved over with Reid to work on the IndyCar race.

California is a track that has quickly divided the Nationwide Series teams in the past into two groups. Those with big budgets and Sprint Cup Series drivers who can run at top speed and those Nationwide Series regulars trying not to go a lap down.

I am told by some veteran reporters that this race may feature ten or more "start and park" cars. The teams that towed all the way to the West Coast can apparently get a head-start on traffic if they pull-in before the first set of Goodyear Eagles are out of tread, load up and hit the highway. This issue should be one to watch.

This series continues to be an experiment in marketing and public relations. The Sprint Cup Series drivers winning the races are not getting driver points, so the leader in the points clubhouse and perhaps even the season champion may in fact never win a single race. It would be nice for a regular to break through.

ESPN is going to have to work very hard to get the excitement level cranking once the race settles down. Bestwick has a very good historical perspective on the sport and can ask questions and bring up topics that Reid simply cannot.

This is a track where high speeds look boring on TV until something happens. Then, the intensity of the crash and the distance the cars go until they stop is a quick snap back to reality. Even with a SAFER Barrier, this is a dangerous track.

Veteran fans will remember this speedway has the black marks that are caused by the sealer put down between the strips of asphalt. Those marks have been cursed by more drivers that anyone can count in terms of ruining a good day or affecting a good run. Telling the tale of the challenges on the actual track is going to be key.

Needless to say, both ESPN and FOX need a ratings kick to get things rolling in the right direction. Sometimes, things happen for a reason. Bestwick in the booth might be just what the doctor ordered to change the tone and direction of telecasts that have sometimes bordered on embarrassing. Last week's scoring fiasco comes to mind.

This post will serve to host your comments before, during and after ESPN's coverage of the Nationwide Series race from Auto Club Speedway in Fontana, CA. To add your TV-related comment, just click on the comments button below. This is a family-friendly website, please keep that in mind when posting. Thanks for taking the time to stop by The Daly Planet.