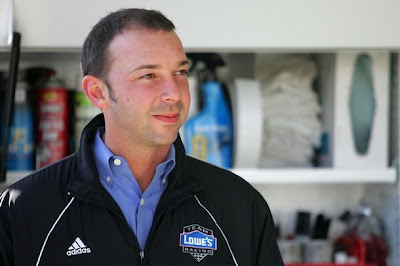 After the tons of TV coverage during each Sprint Cup Series racing weekend, Monday brings only two programs that focus on NASCAR. ESPN2 offers NASCAR Now at 5PM and SPEED has This Week in NASCAR at 8PM.

Both TV series try to distill the information from the racing action and the NASCAR news that each believes fans want to see. This results in two shows, each one-hour in length, that basically report the same stories and show the same highlights. The big difference comes in the approach.

Allen Bestwick was first-up with another suit-and-tie edition of NASCAR Now. Bestwick took this Monday show and turned it around for ESPN after a terrible 2007. Now, the show seems to have hit a plateau of sorts with the TV basics sorted-out. The new challenge is striking a balance on the three-man panel and keeping things fresh.

It was Dale Jarrett, Andy Petree and Ray Evernham working with Bestwick this week and things were a little off-center. Jarrett and Petree work with each other on the ESPN race coverage but rarely appear on the Monday show. Evernham has been a Monday staple this season and once again having two former crew chiefs on the program did not pay dividends.

Ricky Craven has been Bestwick's regular Monday studio partner this season and those two work well with Evernham. That group has tried Randy LaJoie as the third panelist, but they really came alive when Mike Massaro was added to the mix. Having a driver, a crew chief and a journalist's point of view represented on the show really made it click.

Bestwick led the panel through the highlights and hosted a light-hearted look at Evernham and Petree dueling in the celebrity race from Saturday. The comments from all the panelists were solid and informed, but the program plodded along.

Having Ray Evernham get up to host a look at suspension and other car parts that will be changed for Martinsville was a "show killer." There was a new cutaway car in the ESPN2 studio, but with six days until the race this was a bad call. As usual, Bestwick kept it professional and wrapped it up nicely.

This week, NASCAR Now "extended the brand" by taping a segment for the ESPNEWS Network and then airing it in the thirty minute news-wheel after the program ended. While it was a good thought, the ESPNEWS anchors could not have looked more annoyed that basketball was being interrupted for a NASCAR conversation.

When SPEED launched This Week in NASCAR, many fans hoped the show would keep the format of one host and three panelists. That did not happen. As we have often mentioned, two panelists make for a difference of opinion while three make for a discussion.

This week, Chad Knaus returned with Michael Waltrip and fans were instantly reminded why this duo should be featured on the series regularly. During the 2008 season, host Steve Byrnes built an on-air relationship with both men that has paid-off for the TV viewers. This trio is the ticket.

SPEED has retained what ESPN has lost and that is simply fun. Byrnes has a wicked sense of humor and a long history in the sport. From his dead-on Sterling Marlin impressions to his frequent quotes from the late Lindsey Nelson, Byrnes brings his own personality to the show and that is the very thing ESPN squashes on a regular basis.

What SPEED has discovered once again is that a driver and a crew chief work together on the air better than two drivers. Greg Biffle has come a long way, but Waltrip and Knaus offer a ton of information to the viewers. In this show, Knaus actually texted Kyle Busch about a logo on his race winning car and then gave viewers the reply.

The edited features in this program produced by The NASCAR Media Group continue to show exactly why SPEED should allow this company to produce a weekly series based around footage from the sport.

The TWIN race review and the "sounds of the race" feature both offer footage and audio not heard during the live broadcasts of the weekend. As Waltrip remarked, he could listen to that all day.

The fly in the ointment for SPEED continues to be the audio struggles in the new HD studios. Again this week, microphone levels on the announcers dropped dramatically and then rose again in mid-sentence. The configuration of the set forces the talent to constantly turn their heads when addressing each other and that has to be a nightmare for the audio person.

Since they wear Lavalier-style mics clipped to their shirts, the large echo in the studio also plays a role in the very strange "dead zones" on the show where audio is concerned. Give SPEED the nod, they corrected the set issues, the make-up problems and even figured out the correct attire for the participants. Surely, the audio struggles will be next.

If you watched these programs, please feel free to offer your opinion. Just click the comments button below. This is a family-friendly website, so please keep that in mind when posting.

Thanks for taking the time to read The Daly Planet.
Posted by Daly Planet Editor at 10:00 PM 21 comments: