Double Dose Of "Digger" On Tap For Martinsville 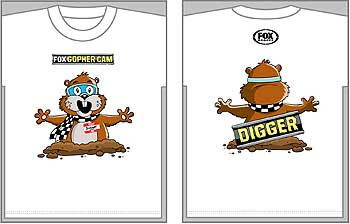 This is the weekend where the NASCAR on Fox crew produces the Camping World Truck Series race on Saturday for the Fox TV Network. While the theory is that broadcast TV network exposure brings more viewers to the series, veteran fans know what else it brings.

That's right, it will be a double dose of Digger and friends this weekend as the animated character will appear in both the Truck and Sprint Cup races. Last year, the Truck race was ruined by the Fox Director and his unending use of the track level camera and the goofy animation.

Click here to read "Digger Dominates Craftsman Truck Race on Fox." This was the TDP column from last season's Martinsville race. Make sure to scroll through the comments, there were some outstanding debates over all kinds of TV issues.

Many of those had to do with the fact that key moments of the live racing were missed while inserting a cartoon gopher to sell T-shirts. Here is a quick quote to help readers remember:

The big "Digger" moment came with only 13 laps to go when Rick Allen yelled "problems as Jack Sprague gets turned around coming out of 2!" Once again, Fox viewers had been watching big truck tires drive past "Digger" and missed another key moment of the race. The Director had been using his favorite toy and not covering the action on the track with less than 15 laps to go.

Martinsville is not the most exciting venue to cover a live NASCAR race and last season the focus of the event quickly turned to having fun with Digger while the trucks roared by in the background. Perhaps, doing only a couple of truck races during the season makes them not exactly a priority to the TV team.

The good news is that last week the movie promos for "12 Rounds" took the place of many Digger moments. The animation was toned down considerably and the "speed shots" of fixed cameras sometimes had only the stationary Digger logo inserted.

Perhaps, the best part was that the NASCAR on Fox team stopped trying to make funny jokes every time Digger appeared on the screen and concentrated on the race. Bristol turned out to be one of the best NASCAR on Fox broadcasts in recent memory.

Aside from the focused commentary and solid directing, the production team topped-off the race by again switching to a nice wideshot that allowed the viewers at home to see almost all the teams race to the flag.

This has been a tremendous change in coverage that used to show only the leader and exclude the remainder of the field. Abandoning the efforts to build drama and instead delivering to the fans a great picture of their favorites racing to the finish line has been a wonderful decision.

As Steve Byrnes has said many times, SPEED is "all in" on Friday from Martinsville. The full TV schedule is posted on the right side of the TDP main page, but SPEED starts at 11AM and runs straight through to 5PM ET with Martinsville activity.

After a short break, Byrnes and company return with Trackside at 7PM. Marcos Ambrose, Aric Almirola and Timothy Peters will be the guests.

ESPN2 will offer NASCAR Now with Mike Massaro at 5PM on Friday. Massaro will be joined by Mike Wallace on Sunday morning at 10 AM for the race preview version of NASCAR Now.

Pleas feel free to offer your comments about the topics mentioned above including the Friday TV coverage on this post. Just click the comments button below. This is a family-friendly website, please keep that in mind while posting.

Just a reminder, we can be found on Twitter by clicking the logo on the main page.
Posted by Daly Planet Editor at 5:00 AM 34 comments: