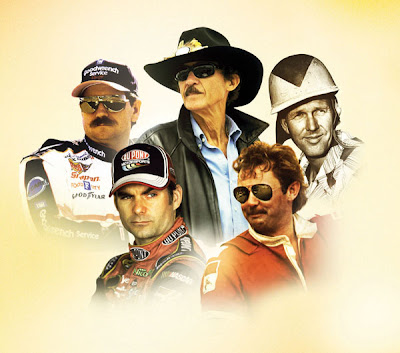 To start this column, click here for the video link to the Ride of their Lives trailer from the CMT website.

When Kevin Costner appeared at the Sprint Cup Banquet, there was some information being given out about about a future film project to which he would lend his voice.

Like many other media members, I assumed it was a project for 2009. As it turns out, The Ride of Their Lives program is airing Saturday, December 13th at 9PM ET on CMT.

One quick check of the NASCAR.com front page reveals absolutely nothing about this project or the fact it is on CMT tonight. Even clicking to the NASCAR.com News Center will not help. The Turner folks who run NASCAR.com are not very kind to programs appearing on other TV networks. It would seem this is the case with CMT.

Here is the CMT summary of the program:

The history and heroes of NASCAR are brought to life through the men and women who lived the dream. The Ride of Their Lives, narrated by Kevin Costner, is a story of family bonds and personal struggle, rebellion and teamwork. These are the threads that weave through the sport's first 60 years and a half century of Daytona 500 races. From the moonshine runners of the postwar years to the superstars of the 21st century, The Ride of Their Lives celebrates a sport that grew from humble Southern roots to become a national spectacle.

This project is being co-produced by The NASCAR Media Group and CMT Films. DALE was the original project that sparked this follow-up. "On the heels of our success with DALE, which was the largest selling sports title ever and was nominated for 2 Emmys, we are pleased to be working again with CMT and with a talent of the stature of Kevin Costner," says Jay Abraham, COO, NASCAR Media Group. "This new film will give fans an exciting inside view of the history and evolution of the sport from the unique perspective of some of the families that made the sport."

So, it looks like fans lucky enough to catch this program will have some final NASCAR-themed TV programming before Christmas. This two hour program has the original airing from 9 to 11PM Saturday, but also re-airs on Sunday from 4 to 6PM Eastern Time.

Update: TDP will NOT have a review of the program. Comcast, my cable provider, apparently has placed CMT on a tier to which I do not subscribe. This is certainly a new development for me as I have enjoyed CMT as a basic cable service for years.

So, it will be up to the NASCAR fans and TV viewers to add your review and comments about this program over the weekend.

To add your comment, just click on the COMMENTS button below and follow the easy instructions. The rules for posting are located on the right side of the main page. Thanks again for taking the time to stop by.
Posted by Daly Planet Editor at 9:59 AM 45 comments: