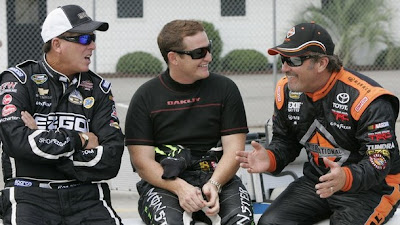 It's a special one day show for the Camping World Trucks at the Darlington Raceway in South Carolina. SPEED has the pre-race show at 7PM and the race coverage at 7:30PM ET.

Krista Voda hosts The Setup with Ray Dunlap and Adam Alexander as the reporters. This is a veteran crew that should be all smiles as the trucks run at Darlington. There is little doubt that tonight could be one of the best races of the year.

Rick Allen, Phil Parsons and Michael Waltrip will call the race. This track tends to string the field out quickly as side by side racing through the corners is really rough for the trucks.

Most passing is done down the straights, but taking it two-wide through the corners is going to be key for the TV crew to capture regardless of the position on the track. The truck series now features drivers of very different ability and experience. That will certainly come into play quickly in this race.

Pictures from Darlington under the lights are outstanding. This is an opportunity for the truck series TV team to recapture the magic of presenting uncomplicated and straightforward NASCAR coverage. There is a big transition taking place behind the scenes at SPEED and tonight we will see if the coverage of the only NASCAR series that the network televises from start to finish is affected.

This post will serve to host your comments on the coverage from Darlington. To add your TV-related opinion, just click on the comments button below. This is a family-friendly website, please keep that in mind when posting. Thanks for taking the time to stop by The Daly Planet.
Posted by Daly Planet Editor at 6:45 PM 59 comments: 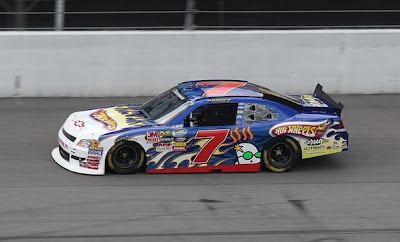 Michigan International Speedway is the stop this weekend for the Nationwide Series. ESPN is the TV network. 1PM ET for the pre-race show and 2PM for race coverage.

Allen Bestwick is set to host the program from the Infield Pit Studio. He will have Rusty Wallace and Brad Daugherty alongside and Tim Brewer in the Tech Garage. Danica Patrick is back and making news with a Hot Wheels sponsored car and solid times in practice. These are the new Nationwide Series cars and they look great.

Marty Reid, Dale Jarrett and Andy Petree are in the TV booth. Mike Massaro, Dave Burns, Vince Welch and Dr. Jerry Punch are on pit road. Jamie Little is off the NASCAR beat this weekend.

The new Nationwide Series cars have been causing a quite a stir. Complaints were everywhere in practice and the tech inspection before qualifying was a disaster. This is an impound race, so drivers will be running exactly the set-up they had after qualifying.

TV has several stories to cover including how many cars are going to start and park on this big track. Meanwhile the cross-over drivers from the Cup Series are in a brand new car and perhaps do not have the advantages they normally enjoy in this series.

SPEED handled the practice and qualifying coverage for the NNS series. ESPN is only covering the race. There may well be a bit of a information gap in terms of the stories that have been unfolding this weekend. That is going to be a key point to watch, especially in the pre-race show.

MIS is a huge track with few TV coverage issues. Cameras on top of the tower work well for racing action. Low angles show the speed and the pit road is straight and wide for easy TV coverage.

It's yet to be seen exactly how the NNS cars will race in a pack on this big track. One thing is for sure, the cars look great and the fan reaction has been positive. This may translate to higher TV ratings as Saturday viewers click by the race.

This post will serve to host your comments about the ESPN coverage of the NNS series at MIS. To add your TV-related opinion, just click on the comments button below. This is a family-friendly website, please keep that in mind when posting.
Posted by Daly Planet Editor at 11:00 AM 78 comments: