Your Turn: Sprint Cup Series From Richmond On FOX 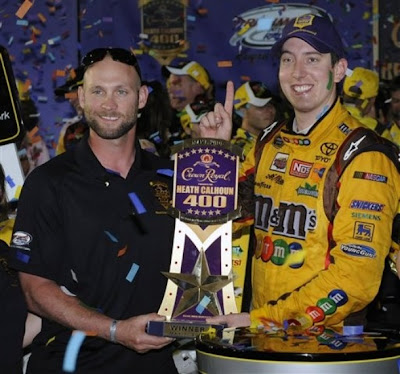 It was a beautiful night in Richmond, VA. However, the weather did not help the racing or the television coverage on FOX.

Chris Myers presented a pre-race show that was more notable for what it omitted than what it contained.

No story on the disabled veteran Heath Calhoun, pictured above with winner Kyle Busch, who was selected to have the race named in his honor by Crown Royal. ESPN profiled Calhoun on the morning edition of NASCAR Now and then aired another feature on him repeatedly on SportsCenter and ESPNEWS.

Slice of Pizzi was also missing this week. Instead, Darrell Waltrip and Jeff Hammond filled the time with a scripted agenda that focused on stories like the friction between two of the Hendrick Motorsports drivers.

Philadelphia, a major TV market, was another story early on in the telecast. The local FOX TV station in Philly chose to air a political debate from 7 to 8PM ET. The station never provided a graphic that informed NASCAR fans what was happening. At 8PM, viewers joined the NASCAR telecast. Unfortunately, the NASCAR on FOX team never welcomed the Philly fans or provided a highlights package of the first thirty laps which had been missed.

The short track action did not translate well to the small screen for whatever reason. Talladega memories perhaps were still in the minds of many. It began to be a grind and fans showed up online to object to how the race was being covered. It was not a pleasant experience for many.

FOX has three more Sprint Cup Series races remaining in 2010. What we would like from you is an honest opinion on the TV coverage of the Richmond race. Just click the comments button below to add your comments. It's important to get the opinion of the fans immediately after the race.

As always, this is a family-friendly website. Please keep that in mind when posting. Thank you for taking the time to add your comments.
Posted by Daly Planet Editor at 12:10 AM 72 comments: 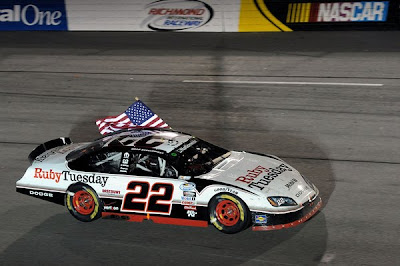 ESPN took a big swing at the network's ongoing NASCAR TV problems during the off-season. There were changes in on-air personnel, program formats and scheduling. Now with only a few months of the 2010 season in the books, those changes are already paying dividends.

Friday night in Richmond signaled the first of five races that will feature Allen Bestwick returning to the play-by-play role. His next race will be Charlotte followed by Road America, Daytona and Montreal.

Some fans may remember that Bestwick began his new TV role as a utility player for ESPN. He handled pit road reporting duties, but also hosted the pre-race show and then called the action for several of the network's stand-alone Nationwide races.

Since that time, Bestwick has become a crucial part of ESPN's overall NASCAR coverage. He righted the ship on Mondays by hosting the one-hour version of NASCAR Now . That show has become the weekly cornerstone for the studio series. He also stepped-in and returned much needed credibility to the Infield Pit Studio.

Moving Bestwick to the booth in Richmond again opened the door for Nicole Briscoe to host the pre-race show and fill the infield studio role. Briscoe's baptism by fire had come in Texas, where she filled three hours of live rain delay programming with interviews and features. It was an impressive debut.

Positive comments filled the TDP Texas live blog as ESPN offered a glimpse into the past. Dr. Jerry Punch sat down with Dale Earnhardt Jr. for an impromptu garage interview. Thoughtful questions from Punch brought out the best in Junior on a wide variety of issues. This was clearly what ESPN had been missing and only Punch could provide.

Friday night in Richmond, Bestwick took control of the TV team and led them through a telecast that had a very familiar feel. It was comfortable. Bestwick in the booth, Punch on pit road and Briscoe in the infield really clicked on the air.

Mike Massaro, Dave Burns and Vince Welch are also going to play new roles this season. Massaro has been solid as a full time NASCAR Now host after relocating his family to Connecticut. He has also been asked to return to pit road for select races and report for NASCAR Now and other ESPN programs when he is on the road. This year, Massaro is a very busy man.

Burns and Welch will also get an opportunity this season to step into the play-by-play role. Anything will be better than the ill-advised "Backseat Drivers" scenario of 2009. Burns will handle the upcoming Nationwide Series race at Gateway. Welch will call Nashville, ORP in Indianapolis, Iowa and the second Gateway race.

Real credit goes to the ESPN management for making these changes. Suddenly, the entire NASCAR on ESPN programming category has a new lease on life. The daily news show is informative and well hosted. The Nationwide races have become fun with Marty Reid and Bestwick calling the action.

The final piece of this puzzle is the big one. This is ESPN's fourth swing at The Chase for the Championship. In total, the final seventeen Sprint Cup Series races will be on ESPN. This time, it needs to be right.

Judging from the early reviews, ESPN's new cast of NASCAR characters have started the season on the right foot. It should be interesting to see if this momentum can continue to build as both ESPN and NASCAR could certainly use a strong run to the finish line this year.

TDP welcomes your comments on this topic. To add your opinion, just click on the comments button below. This is a family-friendly website, please keep that in mind when posting. Thank you for taking the time to stop by The Daly Planet.
Posted by Daly Planet Editor at 12:05 AM 27 comments: