No TV Winners In Martinsville Rain 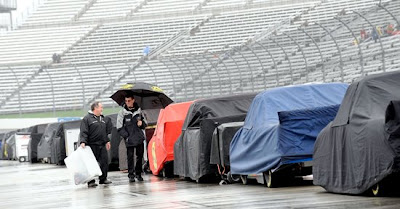 Across the board in NASCAR TV land the rain really killed the momentum of the season. Sparse crowds at the SPEED Stage for big shows like Trackside and NASCAR Performance really showed just how bad the weather was in the area.

Luckily, Trackside guests Marcos Ambrose and Timothy Peters kept things lively. Ambrose reveals little slices of his personality in each interview and his fascination with American history showed yet another piece. The fact that he blends so well with the Trackside crew also helped.

Timothy Peters is a personality that NASCAR should certainly expose to the public more often. A great sense of humor and a diverse background made him a pleasant surprise where NASCAR TV is concerned.

It must be interesting for Kyle Petty to travel to the Sprint Cup Series venues these days. Since he is not involved in the radio coverage and does not work on the TV side until the TNT telecasts, he only pops-up on the media radar while participating in the off-base game show on SPEED called NASCAR Smarts. That is a lot of travel to face-off with Rutledge Wood for thirty minutes every weekend.

Fox filled the original Saturday Camping World Truck Series timeslot with live coverage that never really talked honestly about the rain. Even with the drops visible on the ground, the conversation was themed around the race getting underway shortly. That was never the case.

This weekend it was Chris Myers and the Fox Hollywood Hotel instead of Krista Voda and the SPEED gang. This left Myers running the show in the rain delay with Voda relegated to the role of a pit reporter. Myers has limited knowledge of the CWTS and it was a smart move to bring Phil Parsons onto the pre-race show.

This let viewers see the two "camps" as Parsons continually addressed serious issues and offered information while Myers and Jeff Hammond continued their goofy act about birthdays, the Martinsville hot dogs and kidding because they care. Two very different styles of presenting NASCAR on TV.

The CWTS event will be shown live on SPEED Monday at noon ET. The SPEED announce team of Rick Allen, Parsons and Michael Waltrip will call the action. Krista Voda and Adam Alexander will handle pit road, Ray Dunlap is on vacation.

Sunday, the regular TV line-up is in place as ESPN2 starts the day with NASCAR Now at 10AM. Mike Wallace will join Mike Massaro in the ESPN studios with Nicole Manske and Marty Smith reporting from Martinsville. SPEED follows with RaceDay at 11:30AM. Guests include Rick Hendrick and country star Trace Adkins.

The NASCAR on Fox crew takes to the air at 1:30PM with Myers and Hammond once again from the Hollywood Hotel. The weather should be windy, but the chance of rain is low. Mike Joy will call the race that takes the green flag at 2:16PM. Darrell Waltrip and Larry McReynolds will join Joy in the booth while Steve Byrnes, Matt Yocum, Voda and Dick Berggren will handle the pit reporting.

There are plenty of storylines and plenty of potential spoilers in this race. The COT at Martinsville is an interesting sight. Big, boxy and sporting a rear wing it certainly does not have the look of a race car designed to duke it out on a flat short-track. To say it was not created for television is an understatement.

On the bright side, the Fox coverage from Bristol was orderly, inspired and focused. All of that will once again be required to deal with this race. Teams can easily get a lap down quickly. The pit road is a challenge to cover for both the reporters and the TV director. Finally, the slow speeds and lack of side-by-side racing action on a green track will require a lot of patience and good on-air conversation.

After the race, Bob Dillner will be reporting live for The SPEED Report at 7PM. John Roberts, Jimmy Spencer and Kenny Wallace offer winner interviews on Victory Lane at 8PM on SPEED. That network ends the night with fan favorite Kenny Schrader co-hosting Wind Tunnel with Dave Despain at 9PM.

TDP will be live blogging the Martinsville event, please feel free to join us. We welcome comments from readers on the topics discussed above. Just click on the comments button below. This is a family-friendly website, please keep that in mind when posting.

Thank you for taking the time to stop by The Daly Planet.
Posted by Daly Planet Editor at 7:30 PM 14 comments: 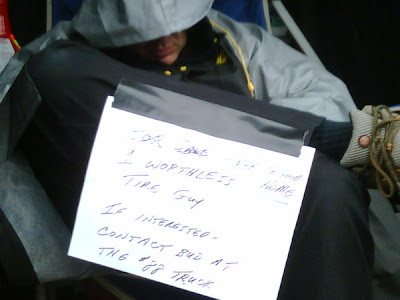 Update: Truck series race on Monday at noon ET on SPEED with the CWTS TV crew. Thanks to Max Papis for the pic of the napping pit crew member for rent.

The weather forecast does not look good for the Martinsville area Saturday afternoon during the scheduled Camping World Truck Series race on Fox.

Thunderstorms are predicted and even The Weather Channel is not giving things much of a chance of clearing for the time needed to complete the event. This stirs things up a bit for the TV crews, because NASCAR will most probably move the CWTS race to Monday.

Since the Fox broadcast network does not have a Monday morning or afternoon sports "window" for a CWTS event, the race would probably move over to SPEED. As most of you know, SPEED is owned by The Fox Cable Networks company.

The twist in all of this is that SPEED's CWTS announce team of Rick Allen, Phil Parsons and Michael Waltrip are already on-site in Martinsville. They were on the air Friday to call the practice session for the trucks before the rain came but this weekend they are not scheduled to call the actual race.

Because the race is on Fox, it is Darrell Waltrip and Larry McReynolds that are set to join Mike Joy to call the action. Should the race shift to SPEED on Monday, a good case can be made to bring Allen, Parsons and Waltrip back to add the commentary.

This would also be the case for the pit reporters. Currently, three of the Fox team are handling the Truck Series race. Ray Dunlap and Adam Alexander are the SPEED pit reporters. Finally, the Monday shift would eliminate the Hollywood Hotel and Chris Myers. Whether or not Krista Voda hosts a pre-race show for the Monday rain date is yet to be determined.

TDP will keep readers up to date on these changes as they happen on Saturday. Come back and check for updates if and when the rain keeps falling. Please feel free to add your comments about the Saturday TV on this post.

This is a family-friendly website, please keep that in mind when posting. Thank you for taking the time to stop by The Daly Planet.
Posted by Daly Planet Editor at 12:05 AM 67 comments: