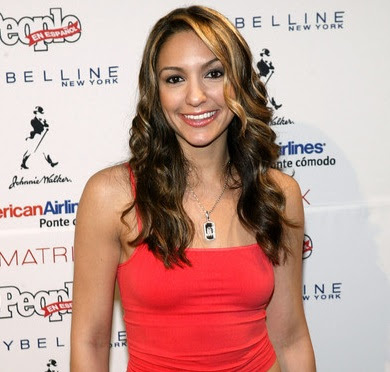 Update: Monday night brought lots of email and social media messages about the changes to the RaceHub program on SPEED. This is a repost of the story describing those changes from last week.

A trio of announcements from SPEED has made for some interesting reading and some head scratching moments. Let's take the items one at a time.

The young lady pictured above, Marianela Pereyra, is joining Trackside as a reporter for the next four programs. As we know, SPEED has been working to revamp the series and began by eliminating Larry McReynolds from the program this season.

Trackside has also been searching for a new host since Steve Byrnes moved into the network's RaceHub studios to host that series. It appears for the moment that Rutledge Wood has been given the role, at least for the next several programs.

Wood will host Kyle Petty and Jeff Hammond on the show this weekend from Atlanta with Joey Logano and David Ragan as guests. Trackside's new reporter goes simply by Marianela and is a TV veteran of music, poker and sports programs.

It should be interesting to see what this new format has in store for viewers and what role Marianela will be filling working among NASCAR fans in a program taped live outside. More fan interaction with the guests, perhaps?

That means fans can literally switch over to SPEED for an extended post-race show in the Victory Lane format. This program offers John Roberts, Kyle Petty and Kenny Wallace on a small set right in the actual Victory Lane area of the track. The idea is to capture the moments and also interview the winning driver, crew chief and owner. Bob Dillner reports for the show and highlights are also included.

This is a wonderful change for both the Saturday and Sunday races. The network deserves credit for moving to this flexible air time format to capitalize on the Sprint Cup Series TV audience that watched the live race.

Victory Lane will also keep it's Monday morning re-air. WindTunnel with Dave Despain will move to 8PM on Sundays to fill that now vacant timeslot.

The final news item is the head scratcher. It has already resulted in some rather upset NASCAR fans immediately after the announcement was made. SPEED's Monday through Thursday RaceHub show is being moved from 7PM to 6PM Eastern Time beginning September 12.

This move puts RaceHub squarely up against local TV station and broadcast TV network newscasts from Florida to Maine. The sacred 6PM hour of news is an East Coast institution. Even more interesting is the fact that for September, SPEED is airing two repeat episodes of the Pass Time drag racing game show in the 7PM hour. In September, the show continues to re-air at 11PM Pacific Time.

We asked for an explanation of the RaceHub move, but did not get a response from SPEED.

As always, we want your comments on these topics. To add your opinion, just click on the comments button below. Thank you for taking the time to stop by The Daly Planet.