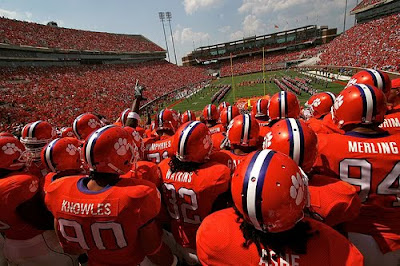 This week, it will be the Clemson and University of Miami football teams that decide the start time of ESPN2's Nationwide Series coverage. Their football game, which is the Clemson homecoming, will start shortly after noon ET.

It will be Allen Bestwick waiting to get on the air with the NASCAR Countdown show from the Infield Pit Center. Brad Daugherty and Rusty Wallace are alongside Bestwick this weekend.

Kyle Busch and Joey Logano are racing the Gibbs NNS entries, but the field also has Carl Edwards, Aric Almirola and Brad Keselowski. Other names of note are Kevin Harvick, James Beuscher and Justin Allgaier.

In the TV booth will be Marty Reid, Dale Jarrett and Andy Petree. Down on pit road are Dr. Jerry Punch, Jamie Little, Dave Burns and Vince Welch. This team has been focused on the Sprint Cup Series races for several weeks now and the Nationwide Series coverage has been affected.

Kansas is an aero track that has been criticized many times for the lack of passing and the focus on quick work on pit road as being the primary opportunity for changing positions. If long runs happen, look for green flag pit stops to be the difference in the race.

Coverage on the track is aided by aerial views and low angle speed shots that help to keep the sensation of speed for the TV viewer. Tight shots of small groups of cars make it easy to lose perspective as to the overall race and location of cars on the track.

This is the fourth season of ESPN putting the NNS telecast in a timeslot that is too short for the pre-race show and designed to only allow for race coverage. After many months of treating this series as a feature presentation, the change in coverage has resulted in the Nationwide series slowly fading off the radar down the stretch.

ESPN is unable to telecast the pre-race show online due to rights issues and has no network that can provide an alternative viewing source. It should be interesting to see exactly what time the football game ends and NASCAR coverage begins.

This post will serve to host your comments on the Nationwide Series coverage from Kansas on ESPN2. To add your TV-related comments, just click on the comments button below. This is a family-friendly website, please keep that in mind when posting.

Thank you for taking the time to stop by The Daly Planet.
Posted by Daly Planet Editor at 11:13 AM 143 comments: