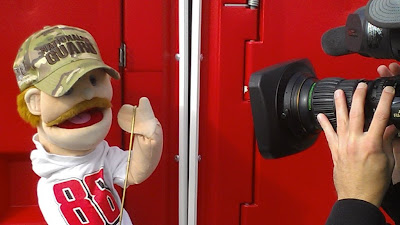 SPEED is the only game in town on Friday from the Martinsville Speedway. Since there is no Nationwide Series race, there is no ESPN event presence. FOX and SPEED get the spotlight.

John Roberts hosts the first NASCAR Live program to kick off the day at noon. Mike Joy, Darrell Waltrip and Larry McReynolds are calling the Cup practice sessions. Matt Yocum and Dick Berggren are the reporters. Rick Allen, Phil Parsons and Michael Waltrip will handle the trucks. Hermie Sadler and Ray Dunlap are the reporters.

The "new look" Trackside will give it another go at 5PM with host Krista Voda. Kyle Petty and Rutledge Wood are the panelists and Marianela Pereyra is the reporter. Regan Smith and Ty Dillon are the guests.

This show gets crazier every week as it veers away from hardcore NASCAR info and heads into the entertainment world. For those asking, the puppet on the show dressed in Dale Jr. fan attire is called Hammerdropper88. Seriously, it has its own Twitter account (@Hammerdropper88) and those on the show and in SPEED PR world send it tweets. Well, it all certainly is interesting to watch.

The nightcap is Danielle Trotta hosting NASCAR Performance and Adam Alexander hosting SpeedCenter. Trotta's show is recorded during the week at the SPEED studios while Alexander is live with all the motorsports news.

We are just going to open the blog for TV comments all day long. It's been a tough couple of weeks in the NASCAR TV world. Maybe Martinsville will be the ticket to turning things around with the fans. Happy to have your comments.