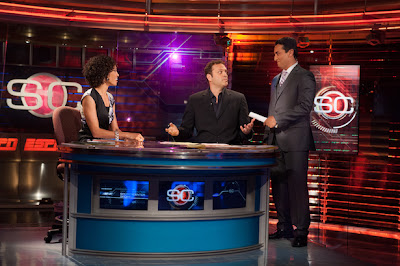 The program that carried ESPN through the early stages of its existence was SportsCenter. The idea was simple. Use technology to record as many sports highlights as possible and then play them back in one show. There were no rights fees to pay, nothing to negotiate and plenty of sports up in the air to record.

The early version of SportsCenter at 7PM previewed the match-ups of the night and set the table. The 11PM version showed highlights of the East Coast games now over and updated the West Coast in-progress scores. Finally, at 2:30AM in the east, the wrap-up show put all the highlights in one place and then replayed in the morning.

Since that time over thirty years have passed. ESPN has become a global media company with digital businesses of all kinds. While the faces, sets and studio locations have changed one thing has remained constant. ESPN continues to use SportsCenter as the backbone of its existence.

These days, SportsCenter expands to fill the holes in the ESPN TV schedule that have seen various types of programming come and go. National business shows, exercise series and even movies have all been tried and failed. The bottom line is that ESPN struggles in dayparts when no live events are scheduled.

A quick check of the ESPN schedule shows just how valuable sports highlights and news are to the network. On Tuesday, 15 of the 24 hours on the ESPN network programming schedule will be filled by SportsCenter. In essence, SportsCenter is the de facto "filler show" between ESPN's live events.

While it made sense to show timely sports highlights when SportsCenter was made available on a limited basis, the opposite is true these days. The over-exposure of this franchise program has led it to morph into something few believed it could become. Sportscenter is now truly the unwatchable hour.

The late night show now originates from ESPN's Los Angeles studios. The morning and afternoon versions are now live from Bristol. The results of these efforts is often nothing more than a disjointed stream of seemingly random content. Even with the labels of the upcoming stories right on the TV screen, it's become very clear that a lot of this content is being created simply to fill time.

Now with such a demand, the network often focuses SportsCenter around a continual stream of experts who seemingly appear to be on-duty at the network 24 hours a day. From Barry Melrose and his mullet to the hyperactive Herm Edwards, there are always former athletes or coaches available to talk about anything. Their role is to take what should be a highlight and expand it into a full-length program segment. Their presence is often recorded, a fact that is rarely made clear to viewers.

The second wrinkle in the modern SportsCenter is the emergence of the non-story. The reporter assigned to document Tim Tebow's first organized team activity (OTA) as a New York Jet found out what others already knew. There was nothing to report. That no longer matters. Simply by taking a reporter, adding a sports celebrity and showing video of both it becomes content now suitable for the SportsCenter marathon.

What the plethora of in-house experts and the forced presence of non-stories has done is eliminate sports that do not fit the SportsCenter mold. Such is the saga of NASCAR and motorsports in general. Since 2007 and the new eight-year NASCAR TV deal with ESPN, nothing has been a bigger disaster than the lack of consistent coverage on the network's flagship news program.

Here at TDP, we have written story after story on the embarrassing and even comical manner in which the various SportsCenter anchors have tried to deal with NASCAR. Here are a few:

SportsCenter Drops The NASCAR Ball from September of 2008

Why SportsCenter Hates NASCAR  from June of 2011

This weekend both NASCAR and IndyCar ran Sunday races. The Indy 500 was featured on ABC while the Coke 600 was on FOX. Like many other Americans on holiday, I tuned into SportsCenter late Monday morning to watch the highlights and get the follow-up reporting on both races.

Dario Franchitti had won one of the most exciting Indy 500 races in years. This event is the jewel of the ESPN IndyCar TV package. The race featured a furious sequence of passing on the closing laps and a final lap crash that became the story of the race. ABC had left the coverage with many stories untold and missed showing many memorable images.

SportsCenter had no Indy 500 highlights, no follow-up and never even referenced the event during the three hours of programming I recorded.

Popular NASCAR driver Kasey Kahne had finally broken his run of bad luck and won in Charlotte. Danica Patrick dominated the pre-race publicity. Favorite Jimmie Johnson had trouble on pit road. There were stories throughout the field. ESPN carries the final 17 Sprint Cup Series races, including the entire Chase for the Championship.

The SportsCenter shows I recorded had no NASCAR highlights, no results and never referenced the race. Fans have told me an earlier AM version of the show had Rusty Wallace talking about the event. Wallace was in Bristol to appear on the 3PM Monday afternoon NASCAR Now program.

In 2011 some key ESPN staff members were taken on an "immersion trip" to the Charlotte Motor Speedway. Click here to read the story. This trip was not arranged because things were going well, but because it was very clear NASCAR's presence on SportsCenter and other ESPN programs continued to be a struggle.

Now, one year later, my Monday SportsCenter experience included Steven A. Smith loudly debating NBA topics, extended analysis in May about the NFL season and a Top Plays feature that did not show the Indy 500 finish.

The unwatchable hour is alive and well. Perhaps that immersion was not quite deep enough.

We invite your opinion on this topic. Comments may be moderated prior to posting.
Posted by Daly Planet Editor at 2:37 AM 31 comments: