ESPN has a quiet day from Phoenix, with the network showing NEXTEL Cup qualifying at 5:30PM Eastern Time on ESPN2. This program is scheduled for two hours in length.

There will be no early version of NASCAR Now, and the late night show will be at 12:30AM early Saturday morning. Marty Reid's name has just been added to the list of hosts for this program on the ESPN Media Release.

These two programs are ESPN's NASCAR presence on Friday. The network returns with Happy Hour coverage and the Busch Series race on Saturday.

This page will host your comments about qualifying and the late night NASCAR Now on ESPN2. Please keep your opinion TV-related, and read the rules for posting on the right hand side of the main page. To add your comment, simply click on the COMMENTS button below, and follow the instructions.

We do not want your email address, and there is nothing to join. What we would like is your opinion. Thanks for taking the time to stop-by The Daly Planet and leave your opinion.
Posted by Daly Planet Editor at 9:46 PM 48 comments:

Friday at Phoenix offers SPEED viewers an interesting day of programming that ends with a live race. It also offers another example of ESPN stepping away from practice and qualifying for series it has covered all season.

SPEED begins at Noon Eastern Time with a ninety minute Busch Series practice live. The network then transitions to the NASCAR Live program for all the latest news and interviews from the track at 1:30PM.

Following at 2:30PM is the quirky Go or Go Home show, which was supposed to focus on the on-track situation, but has often been just an extension of NASCAR Live.

This early programming block gives SPEED three hours live from Phoenix with no competition from ESPN. After a thirty minute break, SPEED returns to the live format.

At 3:30PM the network hosts live Busch Series practice which leads directly into Craftsman Truck Series qualifying. This block is scheduled to be over at 5:30PM, but may run slightly longer. Then, everybody gets a meal break before the main event.

At 7:30PM Krista Voda hosts The Set-Up, which is the pre-race show for the Craftsman Truck Series. Then, at 8PM the race coverage gets underway with Rick Allen and Phil Parsons calling the action. Ray Dunlap and Adam Alexander will be on pit road. I did not receive anything from SPEED about Michael Waltrip's participation.

This should be an outstanding live event for SPEED, perhaps one of the best Truck Series races of the season. With the points championship on the line, things could get very interesting very fast. SPEED has done a great job for this series, and the teams have provided great racing this year.

This page will host your TV-related comments about the SPEED programming on this Friday. Please keep your comments related to the subject matter listed above, and read the rules for posting on the right hand side of the main page.

To add your comment, simply click on the COMMENTS button below, and follow the directions. We do not want your email address, and there is nothing to join. We just want your opinion of SPEED and their Friday at Phoenix. Thanks again for stopping-by.
Posted by Daly Planet Editor at 9:24 PM 20 comments: 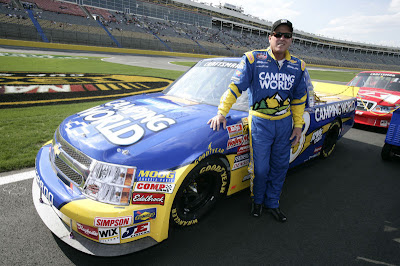 Thank goodness email does not have a volume control. Its easy to look at the list and just think these little messages are going to be brief and meaningful. Sometimes, in reality, all heck is about to break loose.

This was The Daly Planet email box after Marty Reid hosted back-to-back versions of NASCAR Now. Boy, mention Marty's name and everyone has a reaction.

My column about Marty hosting the "NASCAR Summit" without NASCAR got both positive and negative comments right away. It even inspired another Joe Foster video that showed-up on the AOL Fanhouse. The show was great, but making Reid talk about using an NFL football format for races was um...Busch league?

Luckily, Reid came back on Wednesday and did his usual professional job of hosting this thirty minute show. Reid really put the topper on this "new" NASCAR Now by reading, and sometimes answering, viewer email. This put The Daly Planet email box on nuclear.

My next article talked about Reid being the face of both the NHRA and IndyCar for ESPN and ABC. I liked Marty on the drag racing, but this season I had not seen many NHRA events with my new NASCAR commitment. I guess I should have tuned-in.

My first email of the day was from our friends at ESPN, telling me that Reid was moved off the NHRA Series this season, and put on the IndyCar beat. Much to my surprise, he has not done any NHRA telecasts this year. I certainly appreciate their help, and like the fact that somebody, somewhere at ESPN is reading this little column.

The even bigger surprise was who ESPN had put on the NHRA series. It was the former voice of the Indy 500, ABC veteran Paul Page. Long past his prime, I was under the impression that Page had retired. NHRA fans reminded me this was certainly not the case.

My error in mentioning Reid and the drag racing this season began a long list of emails from NHRA fans that sounded vaguely familiar. ESPN had assigned an announcer to their series that did not fit, that did not know the language, and that did not even know the fundamentals of the sport. Why was Paul Page happening to us, they said. Talk about deja vu.

Little did I know this domino effect would continue with more Marty Reid fans asking if a certain NASCAR Now show host had been fired? Apparently, a season long build-up of fan frustration was being vented. Unfortunately, I am not in that loop, and can only sit back and watch the action for the next two weeks with everyone else.

Thursday night, Marty Reid was back on NASCAR Now and absolutely put the show over the top with his easy-going style. Kyle Busch, Stacy Compton and DJ Copp were on the program. Kyle did a great interview, Stacy handled his analyst duties from the Phoenix track still in his fire suit, and DJ Copp pointed out the key pit crew issues that are going to be so crucial this weekend. It was wonderful.

But, just like Wednesday night, Reid had something that really raised this show to a new level. That was an extended interview with a real NASCAR racer named Ron Hornaday. The Craftsman Truck Series has really taken it right in the teeth from NASCAR Now this season, and The Daly Planet had pointed that out many times.

This one interview demonstrated just how powerful and dynamic a single driver can be when he is asked the right questions by the right person. Hornaday's intensity leapt through the screen and gave the Truck Series a personality right in front the viewer's eyes. Hornaday is an old style racer who is tough as nails and embodies the spirit of the Truck Series from top to bottom.

Reid led him through several Truck Series championship scenarios complete with dirty team tactics, rough driving and even some post-race "festivities." The key for Reid is to let the driver shine, and get out of the way. He did just that.

If there was any viewer who watched the Ron Hornaday interview on NASCAR Now and is not going to watch the Craftsman Truck Series race Friday night, they need to check their pulse. That is the type of interview that drives fans to both the TV and the racetrack. The power of NASCAR Now was on full display.

Kudos once again to ESPN for having the courage to make changes this late in the season to this program, and let someone like Marty Reid help them do it. Thursday's NASCAR Now finally summoned-up in me the first comparison of this series to the classic RPM2Night that helped to put ESPN on the motorsports map. Nice job, everybody.

The Daly Planet welcomes comments from readers. Simply click on the COMMENTS button below, or email editor@thedalyplanet.tv if you wish not to be published. Thanks again for taking the time to stop-by and leave your opinion.
Posted by Daly Planet Editor at 7:21 PM 24 comments: