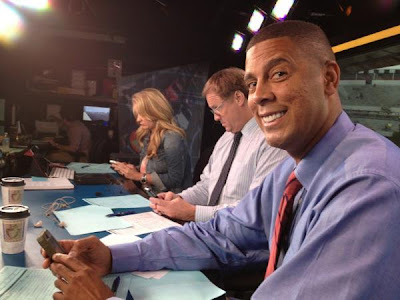 It's time once again for big Brad and the NASCAR on ESPN gang to jump into the deep end of the pool and try to figure out how to show a playoff inside a live race. This will be the sixth season of ESPN trying to choose between chasing and racing.

There will be three hours of pre-race show before ESPN gets on-air from Chicagoland Speedway. NASCAR Now will be at 8AM over on ESPN2 and SPEED will have two hours of RaceDay starting at 11AM ET. There is little doubt what the focus of those two programs will be.

Nicole Briscoe will have Daugherty, Rusty Wallace and Ray Evernham along for the ride. The picture above is the Infield Pit Studio from Evernham's perspective via Twitter. This crew will have a tough time fitting in once the pre-race show is over. There have been few caution periods at this track for the Sprint Cup Series and the green flag pitstops are crucial. Expect to see Nicole and company during the race recapping the event as the network returns from commercial breaks.

Speaking of commercials, all ten Chase races will be utilizing the ESPN NonStop split-screen for breaks during the final half of each race. It's better than nothing, but certainly ESPN expanding this concept should they decide to stay in the sport after the current contract expires would make a lot of sense.

Allen Bestwick has been solid for the network, calling the action and putting things in perspective. Dale Jarrett and Andy Petree have been effective, with Petree taking the lead in offering opinion and Jarrett sticking to analysis of events inside the race. Jarrett has never really taken full advantage of his on-air position. These three begin the Chase in the TV booth.

Jamie Little is back from maternity leave and she will be joined on pit road by Dr. Jerry Punch, Vince Welch and Dave Burns. Things tend to get a little testy once the Chase is underway, so it should be interesting to see just how these drivers relate to the ESPN reporters in general. The past several years are filled with rather memorable moments between those two parties.

ESPN has a production formula that is totally different from SPEED when that network covers the truck series. A race with SPEED has wide angle shots, plenty of moving back into the field for racing action and an on-air conversation that evolves with the race. ESPN shows two cars at a time, recaps only when planned well in advance and tries continually to keep referencing the pre-race show topics.

Things get even tougher when a non-Chaser is leading the race. TV has to decide how to keep viewers up on the race without losing perspective on the Chase. The results over the past several seasons have been mixed. The suggestion of just showing the race and then letting the points fall where they may when it is over has been roundly rejected.

ESPN is infamous for trying to keep graphics on the screen that continually update the Chase cars as if they are alone on the track. The "points as they run" graphic has become a media joke since no points are awarded until the race concludes. It's just stats without meaning until the race is run.

With Bestwick now firmly in place, it should be interesting to watch his agenda of calling the race clash with the ESPN production agenda of following the Chase. Bestwick often tries to steer the coverage to a certain group of cars, but with little success. He is torn between watching the race out the window and continually referencing the Chase on his ESPN TV monitor.

Tim Brewer, Draft Tracker and the other assorted bells and whistles ESPN has tried over the years have not been missed. The hope is that finally an internal TV production agreement has been reached for the ESPN crew to cover all the teams racing and not exclude those not in the Chase. In these times of sponsor problems, low TV ratings and a grumbling fan base it just might be a good idea to try a little something new.

We will be hosting a live stream of TV and media comments on Twitter using the #TDP1 hashtag. Please join us. Comments can be left here during the race and there will be a "Race Wrap" post up once ESPN signs-off on Sunday. Thanks as always for stopping by.
Posted by Daly Planet Editor at 2:39 AM 7 comments: