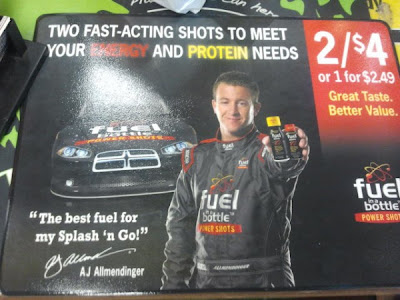 It's starting to come unraveled in the AJ Allmendinger substance abuse saga. Today has been a day of breaking news and many statements to the media from different parties.

5:15PM update is that Tara Ragan has confirmed while on the Sirius Speedway show on SiriusXM radio the substance Allmendinger tested positive for is amphetamines.

Click here for the link to ESPN reporter David Newton's story on the amphetamine confirmation.

Click here for the Charlotte Observer's Jim Utter on the same topic.

At 4PM here is the scoop:

Allmendinger has decided to enter NASCAR's "Road to Recovery" rehab program. This allows a NASCAR license-holder to complete a prescribed series of treatments and tests in order to be reinstated. Once you agree to this program, you waive any right to appeal the actual violation.

Tara Ragan, Allmendinger's business manager and spokesperson, said today on various media outlets that Aegis Lab did not specifically tell Allmendinger what caused the violation and that she was waiting for a more detailed lab report to be delivered.

Dr. Black from Aegis then told ESPN's David Newton that the cause of the violation could not be an over the counter dietary supplement and that type of issue would have been cleared up before the original violation was reported to NASCAR.

David Higdon from NASCAR then told Newton that Allmendinger had been told of the substance in question that caused the violation from the date of the original test.

Ragan, Higdon and Tim Cindric from Team Penske will all be guests on the 6PM ET edition of the NASCAR RaceHub program today on SPEED. Bob Dillner will be reporting on the topic.

Updated information on this topic will be included on this post. We welcome your comments on this topic.
Posted by Daly Planet Editor at 4:49 PM 23 comments: 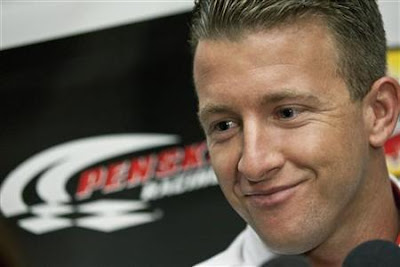 Tuesday evening just prior to 9PM ET a press release was forwarded to the media from NASCAR. Here is the copy:

"AJ Allmendinger, driver of the No. 22 car in the NASCAR Sprint Cup Series, has been suspended indefinitely from NASCAR for violating the sanctioning body’s substance abuse policy."

On July 24,Allmendinger was found to have violated Sections 12-1 (actions detrimental to stock car racing) and 19 (NASCAR’s substance abuse policy) of the 2012 NASCAR rule book.

As outlined in the rule book, NASCAR next will provide Allmendinger a letter outlining a process for reinstatement. By agreeing to the letter, he will be allowed to participate in the Road to Recovery Program.

The surprise in this announcement was that both Allmendinger's spokespeople and many media members had been relating that the results of this test would not be available until late Wednesday or early Thursday. The timing of this announcement, long after regular business hours on the East Coast, is just as awkward as the original notice of a substance abuse policy violation only hours before a Sprint Cup Series race.

At 9:45PM, ESPN's Marty Smith passed this along on Twitter: Allmendinger's agent stated the sample was "within nanograms" of accepted tolerance. (That) they're unsure whether to fight or do NASCAR recovery program.

"This was not the news we wanted to hear and we will work to get to the source of what may have caused this. To that end, we have secured the services of an independent lab to conduct thorough testing on every product within AJ's home and motor coach to find what might collaborate with his test, which created results that were within nanograms of accepted standards. We are working closely with NASCAR and Penske Racing to identify the next action steps in this process."

"We continue to be extremely grateful by the breadth and scope of support for AJ from his fans and partners. We would like to again thank NASCAR, Penske Racing and all our sponsor partners for the open communication, and for helping us at every step in this process. We expect to have further updates in the upcoming days."

The next stop for Ragan was the SiriusXM Radio NASCAR channel. She repeated the content of her statement but then answered the question most fans and media have been asking.

SiriusXM radio: Do you have any plays to reveal what the substance is?

Ragan: It’s a good question. I don’t have the answer to that right now. I agree with you. It matters to us. It matters to him. I think, for sure, you’re right, there are things that have various connotations to them. We want to get to the bottom of it. I believe that will be the case. Until I get the secondary report and we do that with the lab, which is going to start first thing in the morning. again it’s kind of like a needle in the haystack, so I don’t really know what it is we’re looking for what it is that we’ve got.’’

The paragraph above was transcribed and made available by reporter Dustin Long of SI.com and Athlon Sports. Thanks to him for the content.

Wednesday brings a 3PM version of the NASCAR Now program on ESPN2 and a 6PM live Race Hub program over on SPEED. It should be interesting to watch how these two very different networks approach the issue.

Ms. Ragan has been a public relations professional throughout this ordeal and often allows facts to emerge by simply disclosing others. In saying Allmendinger was slightly over the limit for a stimulant, she pushes aside the issue of illegal drugs and alcohol. By controlling the information flow and not allowing Allmendinger to speak with the media she removes the potential for his words to take on different meaning. That potential was on display with the Jeremy Mayfield suspension and subsequent media mayhem.

Update: Early Wednesday morning Allmendinger took to Twitter for some messages. Here they are:

"I just want to say thank you first and foremost for all of u sticking by me. Please dont think me being (silent) means i havent been reading all ur support."

"And man, it means more than u will ever know. Im sorry we even have to have this going on. But i promise ..i will do whatever it Takes to get to the bottom of this and get back our there no matter what. Thanks guys."
This post will continue to be updated on Wednesday with whatever information becomes available. In the meantime, we invite your opinion on this topic. Comments may be moderated prior to posting.
Posted by Daly Planet Editor at 12:30 AM 25 comments: