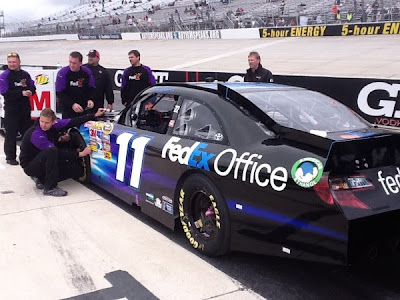 It's overcast in Dover and everyone is hoping this is not another fuel mileage race. Dover can be great on TV or just an endless single-file grind. NASCAR needs great right now.

Nicole Briscoe is up first from the Infield Pit Center with Brad Daugherty and Rusty Wallace. Saturday Wallace spoke with Fox Sports reporter Lee Spencer and said he might be forced to end his NNS team due to lack of sponsorship in 2012. It will be interesting to see if the sponsorship woes of the sport is a topic today.

Allen Bestwick, Dale Jarrett and Andy Petree are in the TV booth to call the race. Dr. Jerry Punch, Dave Burns, Vince Welch and Jamie Little are the pit road reporters. Tim Brewer is in the Tech Garage.

Dover is a track where things happen fast. The main challenge for the TV team is to cut around the two bridges that go across the track. There is no infield, so cars coming down the banking hit the wall hard. You may remember debris from a frontstretch crash striking folks on pit road a while back.

It is important to stay ahead of the pack and show more headlights than tailights. Racing into the camera, especially off the turns, makes for great TV pictures at this track.

There are plenty of stories to follow today, including how Denny Hamlin does now that he has declared himself out of the Chase. Favorites picked by the TV pre-race show talent were Carl Edwards and Jimmie Johnson.

This post will serve to host your comments on the ESPN TV coverage of the Sprint Cup Series race from Dover. To add your opinion, just click on the comments button below. Thanks for stopping by. 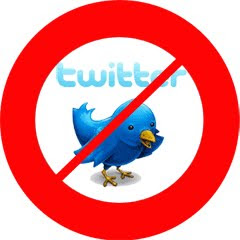 It seems that this part of the racing season really brings out the crisis mode behavior from the NASCAR on ESPN management team. The target of the most recent effort to maintain total control is the actual TV crew.

Basically, ESPN is upset that some members of the working television crew continue to communicate on social media like Twitter and Facebook during the live telecasts. So, the new policy effective immediately is that no TV crew member can use social media when ESPN is on the air with live NASCAR coverage of any kind.

This does not apply to the on-air personalities, the NASCAR Now reporters or any of the ESPN writers assigned to the NASCAR beat. That group already works under an existing set of social media guidelines which we will review.

This latest move is a crackdown on the information being passed along by some of the over one hundred crew members operating the TV equipment and doing the duties required to actually make NASCAR television.

ESPN has a very strict social media policy. That is essentially why you will never see ESPN personalities engaged in extended Twitter or Facebook discussions or confrontations with fans or media members on various issues. ESPN's desire is to coordinate breaking news, updates on existing stories and ongoing controversial topics in advance.

ESPN's original social media guidelines were reported on TDP back in August of 2009. At that time, the focus was on those who were "producing content" for the company.

ESPN regards social networks such as message boards, conversation pages and other forms of social networking such as Facebook and Twitter as important new forms of content. As such, we expect to hold all talent who participate in social networking to the same standards we hold for interaction with our audiences across TV, radio and our digital platforms.

This applies to all ESPN Talent, anchors, play by play, hosts, analysts, commentators, reporters and writers who participate in any form of personal social networking that contain sports related content.

The memo went on to detail the following items:

Personal websites and blogs that contain sports content are not permitted.

Prior to engaging in any form of social networking dealing with sports, you must receive permission from the supervisor as appointed by your department head.

Steer clear of engaging in dialogue that defends your work against those who challenge it and do not engage in media criticism or disparage colleagues or competitors.

Be mindful that all posted content is subject to review in accordance with ESPN's employee policies and editorial guidelines.

This latest move to ban any social media activity by NASCAR television crew members is an extension of those original guidelines. It also points to ESPN's continuing struggle to deal with the reality of what social media is intended to produce.

Jennifer Van Grove from the social media information website Mashable.com offered these words after reviewing the original ESPN policy when it was first published.

"Today is a landmark day for social media, but for all the wrong reasons," said Van Grove. "It would appear that the network is showing poor judgment and exposing to the world the fact that they have no idea that social media is all about relationship building."

What NASCAR fans have been asking ESPN for since 2007 is simply that, a relationship. Instead, they got the suit and tie formality of the Worldwide Leader in Sports. It's very clear that approach fell as flat as a pancake with the NASCAR fan base.

Meanwhile the two other Sprint Cup Series TV networks, FOX and TNT, have embraced social media and made a huge effort to include it in NASCAR TV offerings. 64 year-old Darrell Waltrip carries his iPad into the FOX TV booth and regularly updates himself on what fans are discussing and the questions they want answered.

Over on TNT, Kyle Petty is a longtime Twitter veteran who keeps a continually running conversation with fans going from the pre-race show until long after the network signs-off with the live telecast. Petty is the social media king of NASCAR.

One key reason TV crew members from ESPN began to establish relationships with fans is because ESPN's NASCAR telecasts lacked so much vital basic information that the fans were screaming. It was the crew members, the working media at the track and even NASCAR itself that stepped up to the challenge of filling-in the ESPN information gaps. Make no mistake, in previous years those gaps were huge.

This season, even with the knowledgeable Allen Bestwick at the helm, there is still no social media producer in the NASCAR on ESPN TV booth. No one to feed the on-air talent the instant information tweeted by race teams, NASCAR and other media members in real time.

In ESPN's multi-hour rain delays there is no on-air Twitter interaction with fans. Instead, we get Carl Edwards leading an endless parade of drivers to the Infield Pit Studio. During the races, no questions tweeted to the TV team are ever answered. It's a shame.

On Saturday afternoon ESPN2 will telecast the Nationwide Series race from Dover, DE. There will be the normal interaction between the NASCAR media, officials and fans on Twitter as the race begins.

It's just unfortunate that fans will have a lot less of a behind-the-scenes perspective now that the one hundred or so smart phones of the hard-working TV crew members will be firmly in their pockets and turned off.

We welcome your comments on this topic. To add your opinion, just click on the comments button below. Thank you for stopping by.