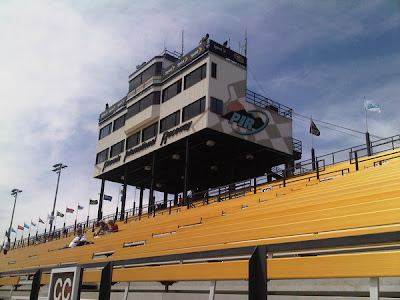 The Major League Baseball season is upon us. While NASCAR is scheduled to start at 7PM, there are regional MLB games on FOX scheduled from 3 to 6PM. We will have to keep an eye on those games today.

Chris Myers is up first from the Hollywood Hotel. As we have previously mentioned, Myers is struggling to manage Darrell Waltrip this season. Jeff Hammond has been trying to help, but Waltrip continues to be all over the map.

Myers also seems to be embarrassed by the "Slice of Pizzi" segment he is forced to run as FOX promotes the "Cubed" online series. This has been a flop since the beginning and continues to take time away from information on the pre-race stories.

The green flag flies at 7:44PM, so this will be a thirty-minute version of the pre-race show. That should put a premium on the amount of junk that FOX can add to the NASCAR news and interviews. Lately, the junk factor has been high.

FOX has the best NASCAR pit reporters in the business, yet continues to leave them out in the cold. During both the pre-race and the race, Waltrip is the star of the show. Unfortunately, this does not allow the amount of information on stories of the day/race to be relayed to viewers. Today, there are lots of stories to report.

Last we saw Mike Joy, he looked and sounded tired. Who wouldn't be with the continual chattering of Waltrip and Larry McReynolds going on all race long? This season has been the absolute worst in terms of Waltrip and McReynolds talking over top of Joy while he is doing his job.

FOX needs to have a focused and exciting telecast as they gear-up to run out the network's string of Sprint Cup Series races. While Daytona was a disaster, PIR has the potential to be fantastic. From the Denny Hamlin injury to the continued feuding on the track, it should be an interesting night.

The challenge for the Director is to stay ahead of the action. We like to refer to it as "showing headlights and not taillights." Cars racing toward the camera and constantly coming forward make for a very different telecast that one camera following the same cars around the entire track. On Friday night, ESPN learned that the hard way.

This post will serve to host your comments on the NASCAR on FOX coverage of the Sprint Cup Series race from PIR. To add your TV-related comment, just click on the comments button below. This is a family-friendly website, please keep that in mind when posting. Thanks as always for taking the time to stop by!
Posted by Daly Planet Editor at 6:00 PM 389 comments: