ESPN2's NASCAR Friday Could Be Kooky 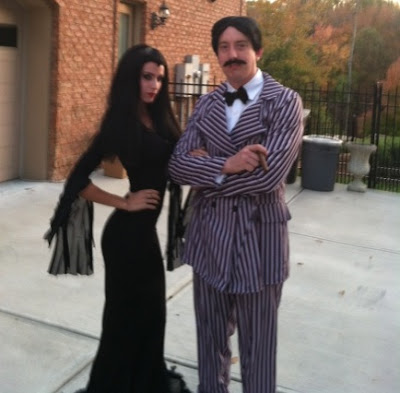 It's really great that Tony Stewart and Carl Edwards are in a Sprint Cup Series Championship fight. Unfortunately, that fight will not play-out until Sunday at the Phoenix International Raceway.

On Friday the only network live from the track will be ESPN2 with Sprint Cup Series practice coverage at 1:30 and 5:30PM ET. That means two two cracks at covering the biggest story of the weekend. Tony are Carl are not even on the radar.

Kyle and Samantha Busch may have hidden in Gomez and Morticia Adams costumes for Halloween this year, but there is literally nowhere to hide on Friday in Phoenix. Busch has to participate in both practice sessions and his recent run-in with NASCAR officials in Texas means every lap will be watched.

The news breaking on Thursday was that the M&M's sponsorship had been removed from the #18 car for PIR and Homestead. Busch will be behind the wheel, but the familiar Interstate Batteries colors will be on the car. Earlier in the day it was rumored that Busch being removed for those two races and would be replaced by Aric Almirola.

At 9:30PM on Thursday night, reporter Dustin Long from Landmark Newspapers tweeted that although M&M's would not be involved in the final two races this season, Joe Gibbs Racing had confirmed the company would return as Kyle Busch's sponsor in 2012.

This leaves the NASCAR on ESPN team a whole lot to talk about on Friday. This story has been very fluid, but finally seems to have settled down into something that makes sense. Of course, no one can predict what might happen to Busch in the garage or on the track in Friday's two Cup sessions. He is not in the Nationwide Series race.

The regular media availability for Busch will be 11:30AM ET on Friday. Normally, this is carried on the NASCAR.com website. This is where the media gets to ask questions of the drivers before the events of the weekend. Check the front page of NASCAR.com for the link.

That means ESPN will already have the basics of the story before the cars hit the track for the first TV session. It should be interesting to see if JGR chooses to have Busch, Joe Gibbs or his son JD do a one-on-one interview with ESPN as well.

This is a unique situation, having a driver who is active along with his wife on social media in this position. Kyle and Samantha talk regularly with fans on Twitter and Kyle is quite different in his conversations than the hot-head we witnessed wreck Ron Hornaday under caution.

Busch has been absent from social media for five days, his wife for two. This type of instant communication tool is key for the NASCAR teams, drivers and sponsors these days. It should be interesting to see what Busch, his wife and JGR tweet to the NASCAR fans on Friday.

This post will serve to host your comments on the Friday media coverage of the Kyle Busch story. Feel free to add your opinion of the coverage on the various NASCAR TV, radio and online outlets throughout the day. To add your comment, just click on the comments button below. Thanks for stopping by.