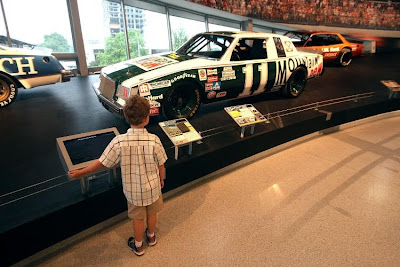 This Wednesday there will be a historic moment in the sport. The names of the 25 nominees for the 2013 class of the NASCAR Hall of Fame will be announced.

It is not a secret that the Hall of Fame has struggled with identity and attendance issues since it opened in Charlotte, NC. No amount of old cars, historic clothing and video clips has been able to spark a buzz among the fans. On my last visit to tour the Hall the mood could be best described as glum.

The actual live announcement of the new Hall of Fame nominees will be done on the one-hour Race Hub show at 6PM on SPEED. Also on that very same program reporter Wendy Venturini will preview the truck race at Rockingham, analyst Matt Clark will interview MWR Competition Director Scott Miller and there will be a special feature on the old North Wilkesboro Speedway.

The Hall of Fame nominations are a moment in time. They are part of a NASCAR branding effort that is critical to connecting younger fans to the history of the sport. While SPEED has been a loyal NASCAR TV partner, the network has its own agenda and ownership.

It only takes a moment to remember that the original Race Hub TV concept suddenly popped-up out of the blue as SPEED was maneuvering to become the official TV outlet for all Hall of Fame activities. For many years, SPEED had rejected completely the idea of presenting any NASCAR programming on Monday through Thursday.

Adjacent to the Hall of Fame are the TV production facilities of the NASCAR Media Group (NMG). As you may remember, Showtime recently shut down the Inside NASCAR program produced in the NMG studios with vague promises of returning for The Chase. SPEED moved the NASCAR Performance TV series out of the Hall of Fame and into the network's own studios.

Without any other original programming to produce, there have been plenty of NMG folks sitting on their hands recently. It seems strange that with the combination of the Hall of Fame, a TV production facility and tons of historic footage there was no one who perhaps considered a TV special built around the Hall of Fame nominations.

Wednesday night after Race Hub is over at 7PM, SPEED has one hour of Pass Time and another of Dumbest Stuff on Wheels. Both represent the type of shows that make up weekday primetime programming on the network.

If NMG had produced a three minute video feature on each nominee, that would have resulted in 75 original minutes of NASCAR programming being available. Add in the Hall of Fame as the location and a NASCAR veteran like Mike Joy as host and perhaps the result could have been a mid-week primetime live TV special on SPEED that fans could watch and record. Two hours would have been a nice length.

Assisting the Hall of Fame with growth and direction begins with supporting that facility through original content spread over television, radio and online platforms. The Hall of Fame website mentions nothing about the Wednesday nominations. The NASCAR website does not point fans to Race Hub or preview the announcements.

A clear part of a live primetime TV special would have been social media. NASCAR fans could have been actively engaged while the special was in progress. The pairing of NASCAR and Twitter has been nothing short of sensational. The NASCAR fan base is vocal, informed and familiar with the latest technology.

It might have been interesting to see drivers, NASCAR personalities and fans offer comments when nominees were announced. Names like Rick Hendrick, Benny Parsons, Buck Baker and others are certain to elicit instant opinions. Both NASCAR and SPEED have been pushing the social media agenda this season and it's sad to see an opportunity like this go by the wayside.

Make no mistake, Race Hub has matured into a solid TV series offering a large amount of content each week. But the topic on the table is how best to use the combination of SPEED, the NASCAR Media Group and the actual Hall of Fame to expand the brand, celebrate the moment and get the message out to the fan base.

Perhaps in the future these moments will be part of a coordinated effort by NASCAR to utilize all the resources, technology and manpower available to put the sport back on the map in terms of national media presence and prestige.